Everyone is Downwind of Somebody 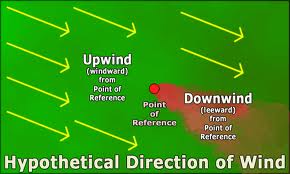 Ruling that the Environmental Protection Agency exceeded the authority granted by Congress, a three-judge appeals court in Washington, D.C. has thrown out rules meant to deal with pollution that crosses state lines.

Like the water and air it defiles, pollution simply has no respect for state boundary lines. It literally goes where the wind blows without any care for photo IDs or toll booths. Willy nilly.

But we are a nation of states, at times united (although not very much lately) and so we have granted each of these states sovereignty over their areas.

And there's the rub.

What do you do with pollution produced in Ohio, but which then drifts into Pennsylvania?

As I wrote about on Aug. 3, Pennsylvania ranks third in the nation for air pollution from coal fired power plants.

And as I wrote about on April 29, a report by the American Lung Association Pennsylvania's air pollution from particle pollution and ozone is better than it has ever been in the last 12 years, it remains among the nation's worst.


In attempting to deal with this cross-state conundrum, the EPA did something unusual for government, they tried to approach it in the most cost-effective manner.

This is how The New York Times explained it:

"Rather than apportion the reductions according to the amount of pollution that each upwind state was contributing, the E.P.A. was seeking to require cleanup according to the cost of the reductions, so that the work would get done in the places where the cost of capturing a ton of sulfur or nitrogen oxides was the lowest. The agency was seeking to create a trading system in which the states could buy and sell pollution credits, with the actual work being done in the places where it was easiest to do it.

But the court said that under this scheme, the agency had improperly required states “to reduce their emissions by more than their own significant contribution to a downwind state’s non-attainment,” according to the opinion, written by Judge Brett M. Kavanaugh and joined by Judge Thomas B. Griffith.  "

I can understand the logic of both positions.

The court says its unfair to make states clean up more pollution than they created, even if they are being paid for it through credits; and the EPA was saying the easiest and most efficient way to clean up pollution is at the source, and we created a trading system to try to make it fair.

The folks who sued to stop it are, of course, those who would have had to bear the cost, several power companies and the mid-west and southern states in which they are located. Let's call them the sending states.

Supporting the EPA rule were those receiving that pollution, mostly along the mid-Atlantic east coast.

The larger philosophical question here has to do with capitalism in general. When you make a can of soup, the consumer buys the can of soup just for the soup, but gets the can as well. Who should have to pay for the disposal or re-use of the can?

Under the current system, it's the buyer and there's a certain logic to that. You can't carry a handful of soup home to east.

But as Robert F. Kennedy Jr. said when he spoke at The Hill School in 2007.

"Nature is the infrastructure of our community, the air we breath, the water we drink, the shared resources," and without it, long-term prosperity is not possible, he told The Hill School audience that September.

It is a "false choice," Kennedy said, to be forced to choose between a clean environment and a thriving economy. "Good environmental policy is 100 percent good economic policy if we measure the economy the way we should: by how many people have good paying jobs and value the assets of their community."

The pattern now, he said, is best described as "liquidating the planet's resources to make a few people rich. Environmental injury is deficit spending, converting our natural resources to cash for a few years of pollution-based prosperity and our children will pay for our joy ride," said Kennedy.

Calling himself a die-hard free marketer, Kennedy said the country instead lives under "a highly subsidized, monopoly driven system."

He said if polluters were required to pay the "full cost of bringing their product to market," including dealing with the waste they produce, the public "would no longer be forced to pay their production costs."

"You show me a polluter, and I'll show you a subsidy," said Kennedy, son of the slain former U.S. Attorney General and presidential candidate.

"Polluters are escaping the discipline of the free market because the free market eliminates waste and pollution is waste," he said. "In a true free market, you can't make yourself rich without making your neighbor rich, but what we have now are people who are making themselves rich by poisoning the rest of us."

I have long been attracted to this idea. The idea that companies and utilities create pollution, and we the taxpayers become responsible for cleaning it up.

Consider the diseases, the cases of asthma and heart disease, that are exacerbated by air pollution. Who pays for that? The consumer and the taxpayer.

The Superfund law and efforts like those in which the EPA was engaged in the current case, are efforts to put the cost on the polluters, but it is an up-hill battle.

Some argue that if the companies had to shoulder the cost, they would pass this on to consumers, making everything from electricity to, yes, cans of soup more expensive.

I also think that would then be a motivation to be less wasteful, to make our energy cleaner and more efficient and to make us more cognizant of the true cost of things we now rarely considered.

But such change won't come easily and now, without definitive action by Congress *cough-cough* the EPA will have to try again to create a rule within the vague outlines of the law Congress wrote and which leaves room for challenge from those who benefit from the status quo.

In the meantime, it is estimated 34,000 people a year will die prematurely as a result of that pollution.

Did anyone factor in that cost I wonder?