Or at least as much as the federal government can ever make anything official.

Mermaids, they say, do not exist.

Or at least that's how the Philadelphia Inquirer chose to headline their story on the subject.

Yup, you're not dreaming.  You read that right.

Someone whose paycheck comes out of your 1040-EZ was paid to let us know, in case we were confused, that "no evidence of aquatic humanoids has ever been found."

First of all, I would put it to those who are interested in such things that the absence of evidence does not prove something does not exist.

All it proves is that we can find no evidence to support its existence.

Those are two very different things.

After all, until this week, we could find no evidence that the Higgs boson particle existed, but plenty of people still believed in its existence.

But why quibble with physics? We're talking about mermaids.

So does my above hair-splitting that mean I think mermaids do exist?

I would like it if they did and I think we would live in a much more interesting world if this were so.

I also think, considering how we treat the ocean, that if they did (do?) exist, they would have good reason to be pretty pissed off at us.

But no, in the long run, I think they do not -- at least not any more.

Nevertheless, you may ask, why does the federal government feel the need to go to such lengths to tell us something we are already expected to know?

All to no avail.

Uncle Sam remains mum on all of the above.

But apparently, the folks in Washington felt it necessary to ease the fears of a nervous public; a public made nervous, no doubt, after Animal Planet aired a program during "Monster Week" in May in which they claimed to have found the body of a mermaid.

News flash. They didn't and it's not true.

Certainly there is no shortage of mis-information on television and the Internet.

I mean has the government never watched Fox News? It's mostly about them, and what's wrong with them.

Yet the government rarely feels the need to try to dispel the "fair and balanced" myths perpetrated endlessly over at Fox.

Why is the federal government taking a position on this and not the others? 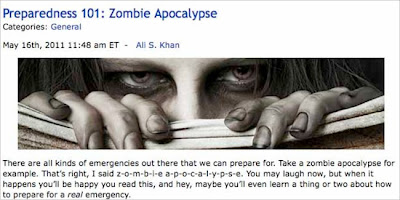 Well, as it turns out, they are not entirely mum on the subject of all non-human of our earthly neo-cohabitants.

Recently, the Centers for Disease Control let slip information meant to prepare us for the zombie apocalypse.

Sadly, the humorless among us have since required the removal of the post on the Centers for Disease Control' Blog, but not before The New York Times captured part of the image (above) to share with those of us who still appreciate a little mystery in our lives.

But now we're left in a quandary.

If the government thinks zombies are real, should we believe them?

And if the government thinks zombies are real, does that make their position on mermaids more or less likely to be true?

I don't know about you, but I think I'm going to consult my Tarot cards about all this -- they're government issue.