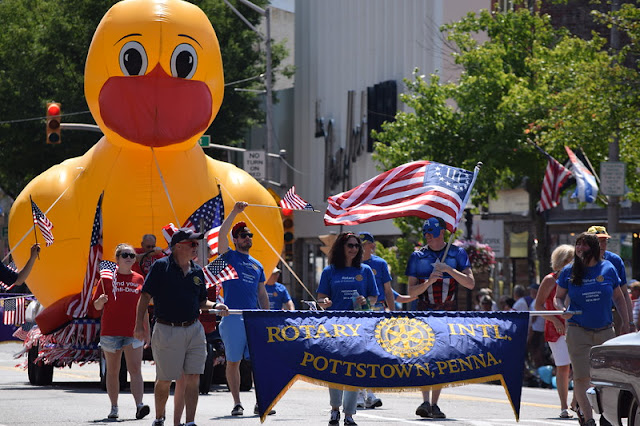 Blogger's Note: The following has been submitted by the Pottstown Rotary Club

The Rotary Club of Pottstown has named the area “First Responders” as the honorary Grand Marshal for the Fourth of July Parade.
“We feel that the community owes a debt of gratitude to these individuals who put their own lives in danger to care for those in need during the recent Covid-19 Pandemic,” said Brooke Martin, president of the club. The honored will include the Pottstown Police Department, The Goodwill Fire Company EMTs, and the Pottstown Hospital Tower Health ER, ICU, and Covid Cohort Unit.

The parade is organized by the Rotary Club and sponsored by Pottstown GoFourth.
It will start at 11 am, Sunday, July 4 at High and Adams streets. and proceed west to Manatawny Street. It will include a Vietnam Veterans honor guard, the “First Responders,” Boy Scouts, dance groups, local politicians, Schuylkill River Trail Ambassadors (on bicycles), motorcycles, fire trucks, and other community groups on floats or marching.
The Big Yellow Rotary Duck and the Boyertown Alumni Band will also participate. The traditional steam calliope will bring up the rear of the parade.

A Street Fest sponsored by Pottstown GoFourth will follow the parade and begin at 1 p.m. on High Street between Charlotte and York Streets.
The 30th annual Rotary Duck Race will be held at 3 p.m. at High and Hanover Streets.
Certificates may be obtained from the 30 community agencies or at the Rotary Tent on the 4th of July.