Responding to rumors that the township has plans to eliminate the police department while crime is soaring, the West Pottsgrove Township Commissioners presented a detailed rebuttal during the meeting Wednesday night.

"We are not, I repeat NOT, eliminating the police department," said Chairman Steve Miller.

Township Manager Scott Hutt said the board hired an outside consultant, Safe City Solutions, to find a new police chief to replace Matthew Stofflet, who died suddenly at the end of last year.

"We're very happy with the quality of applicants," said Hutt.

"Why would we do that if we were going to eliminate the department?" asked Miller.

Concerns had evidently been fueled by the fact that the police department is down two officers, one due to a resignation and another due to sick leave.

Rather than hire a full-time replacement, the commissioners had instructed Stofflet to fill the the rooster with part-time officers for the time being, even though the budget called for a full complement of officers.

But Miller read from a memo written in February, 2020, instructing Stofflet to set up a civil service test to allow for the hiring of new officers. They had held off for a variety of reasons, said Miller, but no longer.

Wednesday night, the board voted unanimously to hold the test. 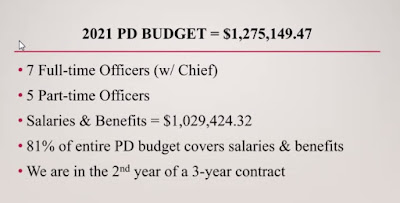 Hutt also gave a presentation indicating that, contrary to rumors, West Pottsgrove's crime rate is going down, not up.

Police arrests peaked in 2017 and calls in 2018, according to statistics Hutt presented.

Further, the COVID-19 pandemic resulted in a sharp drop in retail theft calls, presumably because fewer people were in stores, but a big increase in harassment and disorderly conduct calls.

All that said, the police department is the township's single most expensive budget line, and its questionable how long the township can sustain it, said Hutt.

"If crime is down, does it make sense to allocate money for more officers?" said Miller. "That has a massive impact on the budget, not right away, but when they reach top of scale, which in our township is five years."

As it stands now, the cost for every police response averages out to $350, said Hutt.

The 2021 budget calls for spending $1,275,149 to support seven full-time officers, including a chief, and five part-time officers.

That is almost the exact amount the township took out of reserves to balance this year's budget, said Hutt.

Those reserves, built up into the millions over the years as the township collected fat landfill tipping fee checks from Waste Management, are beginning to dwindle finally now that the landfill is closed and the cash spigot has been turned off.

Commissioner Mark Green said over the past several years, auditors have been advising the commissioners to stop tapping the reserves and try to balance its budget in some other way.

The current millage of 4 mills would have to jump by more than 130 percent to 9.25 mills if the reserves were not, Hutt explained. 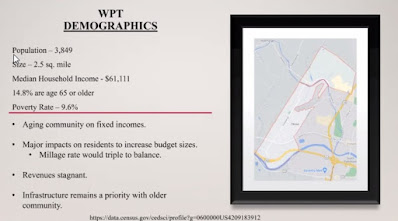 "Who is going to pay for it?" asked Miller.

Hutt had an answer for that too -- West Pottsgrove's aging homeowner population.

Amid the 2.5 square miles of West Pottsgrove Township, the median income in the population of 3,849 is $61,111, and the township has a poverty rate of just under 10 percent.

Nearly 15 percent of that population is 65 years old or older. So West Pottsgrove's budget suffers from an aging community on fixed incomes, with stagnant revenues and aging infrastructure, Hutt said.

The commissioners also offered an extensive discourse on the situation with the West End Fire Company Wednesday night, but that's a story for another day.

If you want a sense of that, click here and read the Tweets from last night's meeting.