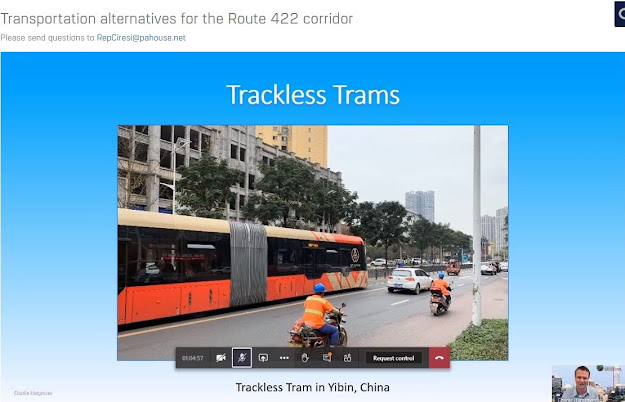 The best way to alleviate traffic congestion on Route 422 is a combination of commuter rail and a system of "trackless trams" to act as a feeder system to the rail stations a recently released study concluded.
The results of the study by two Australian professors, Peter Newman of Curtin University, and Charles Hargroves from the University of Adelaide.
The study was funded by the Pottstown Area Health and Wellness Foundation and presented Wednesday during a virtual town hall hosted by state Rep. Joe Ciresi, D-146th Dist.
Newman and Hargroves examined all manner of options, including high-speed water taxis on the Schuylkill River, buses, expanding Route 422 by one lane; HOV lanes on the highway; a monorail and even flying cars. 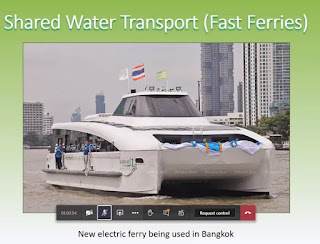 Each had advantages and disadvantages that were carefully studied and, ultimately rejected.
For example, "the cost of widening Route 422 is high, but the benefit is low," said Hargroves. HOV lanes are intended to reduce air pollution, but have little impact on congestion, he said.
And driverless vehicles, said Newman, don't necessarily reduce the number of vehicles on Route 422.
Car-pools can decrease congestion, but the social distancing requirements of the coronavirus make that an impractical recommendation currently, they said.
Shuttle buses are low cost, but also typically have low ridership and while fast ferries could be used on the Schuylkill, as they are in France, the number of dams on the river would require the construction of locks to get them to Philadelphia, Hargroves explained. 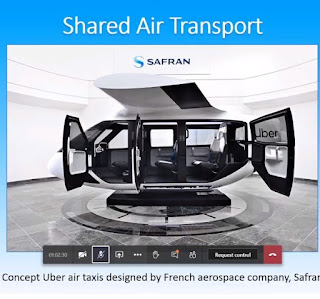 A monorail, said Hargroves, can be built relatively quickly, but the cost is extremely high.
Even air taxis, "which would have seemed crazy five years ago," are now viable and being explored by various companies.
But the cost is high, the capacity low, and there is inadequate regulation of the skies to allow fleets of air taxis to fill the skies, he said.
"Trackless trams," said Hargroves, "have all the advantages of light rail, except you don't need a rail."
The electric vehicles run on existing roads and use sensors to follow a special line painted on the road expressly for that purpose. 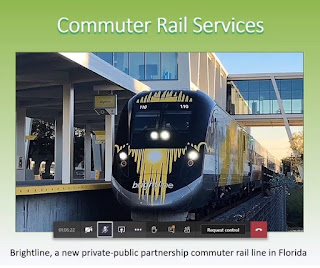 But because rail already exists along the Schuylkill River, parallel to Route 422, it seems to make sense to make use of it if possible, the two professors said.
That's because on train can carry passengers equal to eight lanes of traffic, said Hargroves. "Cars take up a lot of space," Newman added.
The trams could be used to bring people to the rail stations during peak travel times, they said, thus increasing ridership and decreasing the need for large parking lots to hold the commuters' cars.
Ciresi said he, state Rep. Tim Hennessey, R-26th Dist., who heads the House Transportation Committee, along with state senators Bob Mensch, R-24th Dist. and Katie Muth, D-44th Dist., have met with Norfolk-Southern about the use of their rail lines.
"It's all dependent on Norfolk Southern," said Ciresi. 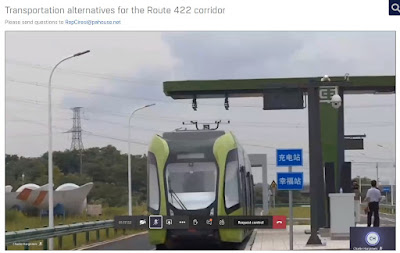 The last passenger trains to run between Philadelphia and Reading stopped in the late 1980s and the tracks were sold to Norfolk-Southern, which is exclusively a freight rail line.
Phoenixville is currently conducting a study about running commuter trains on the existing tracks during specific peak travel times and Reading is also looking into the matter. The best way to move forward, said Ciresi, is for all these efforts to come together and coordinate what can be done.
Because the trams are electric, they are quiet and smooth riding. Each station for passenger pick-up is also a charging station, Newman explained.
And development and technology will spring up around those stations, creating opportunities for public/private partnerships, Newman said. 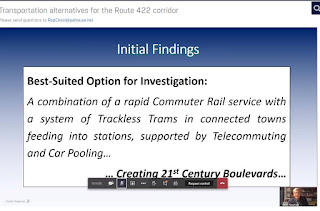 The economic troubles brought on by COVID-19 restrictions can also be looked on as an opportunity, said Newman.
"It has enabled us to start re-building in new ways. In history, this happens after major economic collapses. New technologies are ready but not delivered because the old system was rather stuck. We have to see future as opening up in new ways," Newman said.
"But you have to have the new ideas, the new set of solutions, ready for when things open up," Newman said. "We are going to have to rebuild our economy, so why not rebuild with new and better?" 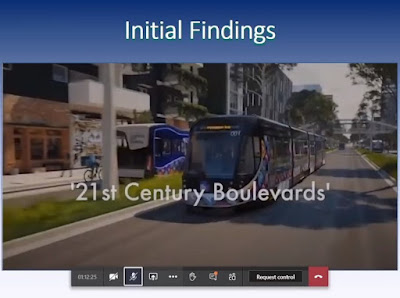 The electric vehicles "are cleaner, quieter, much more attractive and you can start to phase out fossil fuels. You will have a better city and a better transport system if you can do it," Newman said. "These things are an opportunity and they are an opportunity for business."
"West of King of Prussia, we have seen massive development," said Ciresi. "They are talking about a rail line to King of Prussia, and I'm in favor of any additional rail, but that's only four miles. It's 20 miles to get from Pottstown to Norristown."Ciresi said.
Hast year, he and state Rep. Joe Webster, D-150th Dist., conducted an experiment and took public transit from Pottstown to Philadelphia. "It took two hours and 40 minutes. That's too long," Ciresi said.
Here is the entire presentation:
Posted by Evan Brandt at 12:00 AM