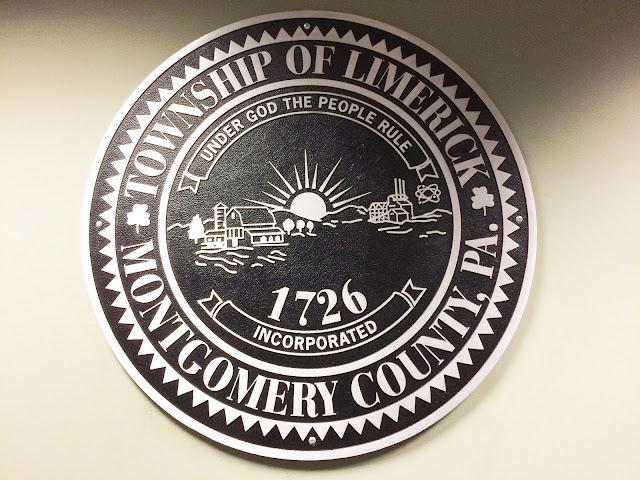 Blogger's Note: The following was submitted by the four Republican supervisors of Limerick Township in response to the accusation by Democrat Patrick Morroney and the Digital Notebook blog post that followed. It is included here in it's entirety, as they requested. Mr. Morroney was provided with a copy of this statement and invited to comment. As of 2:30 p.m. Saturday he has not done so.

We are writing to address a statement by Limerick Supervisor Patrick Morroney made during the July 21st public Board meeting, at which he called each of us “Racists”.

In response to Mr. Morroney’s offensive and false statement, it is important to note that on
June 1st, all five members of the Limerick Board of Supervisors placed our names on a statement to the community documenting actions required by the Township Police Department to answer criminal activity that arose during the time of peaceful protests ongoing due to the tragic death of George Floyd.

Mr. Morroney’s false accusation is in complete contrast to this statement, which specifically stated “Equal and unbiased protection for all is not an issue that needs to be debated”.

In spite of this unifying and positive message, Mr. Morroney now seeks to divide the
Board with the racism claim because we will not support his request to condemn County
Commissioner Joe Gale for comments he made relating to Black Lives Matter.

The June 1st board statement was issued to alert our community of Limerick police activity as a result of criminal threats we felt should be understood by the public we serve, as is our duty as the Limerick Board of Supervisors. In answering Mr. Morroney’s request we have stated that Mr. Gale’s statements have nothing to do with Limerick, is not a topic for Township public meetings, and concerns should be addressed directly to Mr. Gale and the County Commissioners at their public meetings.

We invite everyone to view the June 1st Board’s statement reprinted at the end of this letter and determine for yourself how off base Mr. Morroney’s false accusation really is.

Political operatives who control Mr. Morroney, many of whom have never found it necessary to attend Board meetings in the past, have now attended our two recent public meetings to support Mr. Morroney in his efforts to achieve a letter of condemnation against Mr. Gale.

Mr. Morroney and his supporters have attempted to overt meeting rules and have incorporated shouting and bullying tactics along with foul language to force their will and political viewpoints on this Limerick community. They even attempted to interrupt the opening Pledge of Allegiance at the meeting this past Tuesday.

They have expanded their complaints to include that we were not wearing masks during the meeting even though we were all properly distanced per CDC Guidelines. Their tactics are plainly visible on meeting videos they themselves have posted on several online venues.

It is important to remind the entire community that public meetings are a time to conduct the important businesses of the Township and political issues do not have a place.
Open and respectful dialogue while following meeting rules and proper decorum have been the standard of this community for the past several decades. Mr. Morroney fails to understand these basic premises and during the brief time he has served since January of 2018, continues to demonstrate a desire to advance his political ideology instead of educating himself on issues of importance he was sworn to uphold.

This political effort of Mr. Morroney and his controlling allies is clearly noted in a statement by news reporter Evan Brandt in which he states the following on his Digital Blog:

I should note here that I have also now been to in-person meetings in New Hanover and Lower Pottsgrove townships since Montgomery County moved to the green phase, and no one has raised the mask issue at all in either of those two places.

Therefore, I think it’s fair to consider the possibility that perhaps this drama -- which happens to be coming from a whole bunch of Democrats -- is connected to the fact that Neafcy is running for the 146th state House of Representatives seat, hoping to unseat one-term incumbent Democrat Joe Ciresi.

This is not far leap when you consider that Morroney told the crowd "you know what to do in November."

Over the past 20 years, regardless of political affiliation, Limerick Township Supervisors have understood the importance of working together to focus on important issues and needs of the community.

This unified effort has led to many positive results for Limerick Township including: increased police public safety, strengthening of the volunteer fire department, expansion of the park, trail and open space system, elimination of all township debt, and achieving an AAA Bond Rating all while maintaining below average real estate tax rates.

We remain committed to maintaining the focus that has resulted in these achievements and will not be deterred by the political sideshow tactics of Mr. Morroney and his supporters who control his actions. Our commitment remains to the betterment of this community and to ensure equal and unbiased township wide services to all who call this Township home.

We demand that Mr. Morroney immediately retract his statement that we are racist and offer a public apology to us all so our names can be properly cleared from this unfounded and completely false accusation.

6/1 Message from the Limerick

The Board of Supervisors stand united in condemning the actions of the Minneapolis Police officers that caused the tragic death of George Floyd. In a single instance, these rogue officers have diminished the positive police reforms arising from similar tragic incidents that have occurred across this nation over the past several years. Equal and unbiased protection for all is not an issue that needs to be debated. The Board works closely with the entire Township Police Department to ensure this basic constitutional right is demonstrated at all times, as they work to protect our Limerick community. Limerick is proud of our team of highly trained and professional officers who demonstrate on a daily basis, and under increasingly difficult situations, that equal protection under the law is a mantra embedded in the fabric of the entire department.
Peaceful protests that have taken place since Mr. Floyd’s death properly reflect the outrage of so many, and put all on notice that so much still needs to be done. But the message of those who chose to protest in a peaceful way is now lost by those who now take to the streets to riot, damage property, loot, and cause civil unrest. These law breakers arrived in Limerick on Saturday night on the grounds of the Philadelphia Premium Outlet Mall. Not content with the damage they inflicted throughout the day in Philadelphia, they felt the need to expand their crime wave. Thanks to a sufficient show of force by Limerick and surrounding police departments, these criminals were thwarted in their efforts. On Sunday evening, FBI reports noted that social media posts were encouraging their members to take to the streets and Limerick was noted again as a potential target. In cooperation with county and regional police departments, a force of over 40 officers were on patrol within our community to answer any criminal activity that may have occurred.

The Limerick Board thanks all our men and women in blue who helped protect our community, homes, businesses and lives not only over the past few days but each and every day. We will stay diligent in our efforts to protect Limerick and pledge to help our neighbors as well who may need similar support. In doing so, as one united voice, we will stand up to the criminals who wish to destroy and divide, and support all others who peacefully seek to bring us all together.

Limerick Township Board of Supervisors