Upper Pottsgrove Township Commissioners voted last week to advertise an ordinance allowing the sale of its sewer system to Pennsylvania American Water for $13,750,000.

Commissioner Martin Schreiber cast the only vote against advertising the ordinance.

The vote came Wednesday night after the second of a series of four on-line public meetings to provide information and answer questions about the proposed sale. The next two meetings are Tuesday, April 14 and Thursday, April 16.

(Click here for details on how to attend the next online meeting.)

The vote to advertise the ordinance will make it possible for the commissioners to vote April 20 on whether or not to sell the system.

The April 6 meeting occurred at the same time as the Pottstown Borough Council meeting, so I only caught the tail end of the Upper Pottsgrove meeting.

I am not sure how much new information was provided, but one piece identified by attendees as missing during the first meeting was provided in the second.

Newly provided was what the history of the township's rate hikes over the past few decades looks like. 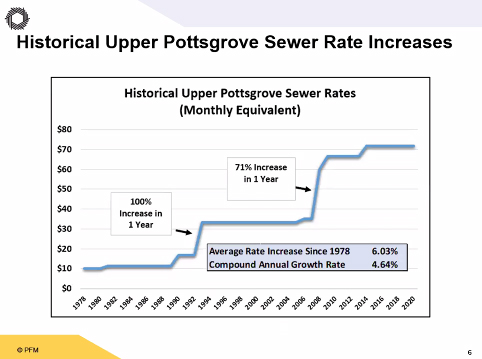 The chart shows that Upper Pottsgrove's sewer rates have not moved steadily. From 1978 to about 1988, there was little change. Then there was a doubling of the rate in about 1992 and another decade of no change.

In 2007, they jumped another 71 percent when the state forced the township to take over and replacing the failing pump station in the Regal Oaks subdivision.

The township calculated, as the chart shows, that the average rate since 1978 is about 6 percent and the annual growth rate works out to 4.64 percent.

Information about the forecast rate increase under Pennsylvania American was also made more specific. 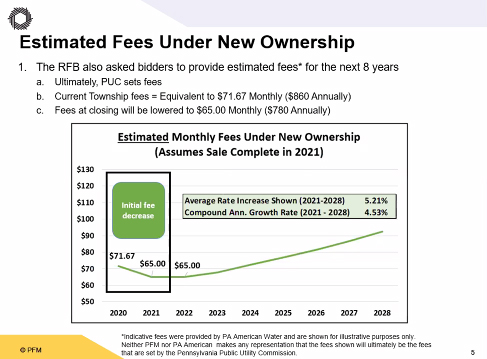 Those projections show rates would drop initially by about 9.6 percent under the current proposal, and then begin to climb again about two years after the purchase is completed.

The township also provided two new slides in its presentation to show:

A) How the sale would benefit homeowners and save them money; 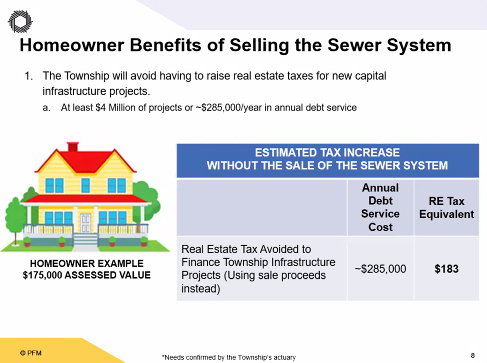 B) How the sale of the system would lower township expenses; 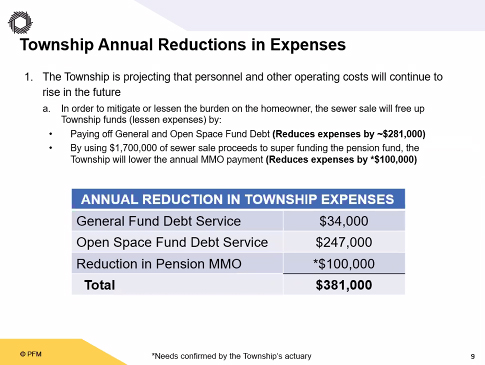 Another piece of the puzzle was added by John Bealer, a former commissioner who is now chairman of the township's sewer committee.

He said the system needs about $5 million in expansion to meet the township's master plan for the system, known as the 537 plan. The properties added to the system will generate $731,500 in revenue, he said.

The remaining cost would "have a great impact on rates going forward," said Bealer.

If Pennsylvania American does buy the system, those same costs would incurred, but they would instead be spread among the company's 700,000 customers and not just shouldered by Upper Pottsgrove users of the system.

There, he criticized the informational letter issued by the township and questioned the wisdom of selling the system.

In part, he wrote:


By now most residents have gotten a letter about selling the sewer. This letter pictures the rosiest picture possible. Does the township have debt? Yes, it does, but only $4.7m is sewer debt. This debt is paid for by sewer customers only.

Selling the sewer, after closing costs, would see about $13m. $4.7M or $5M would pay off the sewer debt. This leaves $8M to pay off the open space that would be paid off too (remember the township voted to tax themselves via Earned Income Tax at 0.25%). This $2M+ would then make members of the community that have no earned income that have sewer pay for this open space.

$200,000+ is owed in the state fund, the money to pay this comes from liquid fuel money from the state from when you gas up. Yes, we can use that money for other items if this is paid, off but do we need to? The general fund has very little debt, maybe around $30,000 a year for a few more years.

When I was seated on the board, the township was in debt for about $12.5M. 6 years later that number has gone way down and the number keeps going down. PFM, the group that is managing the sale, stated they believe that the sewer rates would stay steady if the township keeps the sewer. They also stated that it would cost households about $190 a year in tax increase to borrow $4m for 20 years for new or repairs to the buildings.


There are plans approved for about 140 age restricted homes in our community. This same company would like a total of about 400 homes. If these homes are built the system could sell for another $2M. Should we wait?

If you look up the company that is the highest bidder on the Better Business Bureau they have a D- rating. If you are not happy with your sewer now, you can come to a township meeting and talk it out with the township. You can also vote out the individuals who don't seem to hear your concerns. Who are you going to talk to if it is sold?

To sell the sewer now without having true public meetings would be wrong, it could be perceived as lack of transparency would not be in the best interest of our township.