Upper Pottsgrove sewer rates would drop by about 9.6 percent if the township sells the system to Pennsylvania American Water, a spokesman for the company said Monday night during the first of four scheduled informational meetings on the subject.

However, the decrease -- from the current $71.87 per quarter to $65 per month -- would be short-lived, according to Bernie Grundusky, senior director for business development for the company. 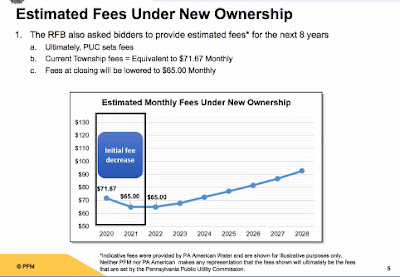 A chart he shared as part of the online meeting showed rates would return to the current rate in three or four years and then increase annually by an average of 3 to 4 percent.

"Although you might see two or three percent," he said.

Resident Don Clancy said a deal that lowers rates initially and then "raises rates 4 to 5 percent indefinitely is a bad deal."

He said the best way to make an informed decision is to compare the increases Pennsylvania American projects to those the township might have to impose. "So we would need to have a look at future costs by the township and we haven't seen that presented tonight," observed Clancy.

"It seems like you're pursuing a short-term fix and creating long-term problems," said resident Al Leach, who is also a member of the Pottsgrove School Board.

After Leach asked how Pennsylvania American's rate projections compare to the township's history of rate hikes, a variety of answers rose in a flurry.

Commissioner Renee Spaide said "in 2007, rates rose 72 percent in one year. I'll just put that out there."

Chris Pelka, the township's sewer engineer, interjected that hike was due to the failure of the Regal Oaks pump station, part of a small private system that failed and which the state required the township to take over.

"That was forced on the township and was an unforeseen circumstance," Pelka said.

Commissioners Chairman Trace Slinkerd then rattled through a list of rates dating back to 2008 too rapidly for me to repeat here with any hope of accuracy.

Former commissioner Elwood Taylor, who has raised several questions in the past about his perception that the township is pushing hard to sell the system, offered that "the rates have been relatively stable for the last 10 years."

"If we sell the system or not, it will cost us more money," Spaide said. "We will have to borrow money to do these projects."

The projects to which she refers are those included in something called the 537 plan, so named after PA Act 537, the law under which sewer system capital projects are outlined.

In February, commissioners approved a bid from Doli Construction for another phase of the Regal Oaks sewer system project. The bid of $537,440 was within the budget for the project, which benefits from a $200,000 state grant to cover part of the cost.

The project will connect 26 homes on Rose Valley Road and Holly Berry Court, as well as seven homes on Gilbertsville Road.

However, according to the presentation made last night, future sewer projects in the 537 plan would be undertaken by Pennsylvania American Water, if the township sells them the system.

Phase 2B of the Regal Oaks expansion; as well as sewer service to Horsehoe and Bruce drives; as well as Continental and Old Orchard drives, would all be undertaken by the company if the system is sold.

Further, unlike when the township constructs new sewer lines, property owners would be spared the $5,447 tap-in fee if the company undertakes the project.

Grundusky explained that the company works under a different system than the township and existing homes and businesses are not charged a fee to connect to the system.

Further, the company will even contribute $15,000 toward the cost of extending the system in the street beyond the area outlined in the 537 plan if requested by a homeowner who wants to connect.

Grundusky said a $4,000 "capacity fee" is charged to new homes and businesses built after the company buys the system, he said.

Ben Kapenstein, who works for PFM, the township's consultant in this matter, said Aqua PA was the other company to bid and because the two bids received on March 16 came in "within 10 percent of each other, we proceeded to a phase called 'best and final offer,' in which we contacted both bidders and informed them they could submit higher bids of they wish."

The final bids were reviewed during a March 25 executive session, he said.

In a physical letter sent out to residents Monday, the same day as the first meeting, and posted on the township Facebook page (but not the website), the township laid out its reasoning for considering the sale.

The primary reasons listed include township debt of $8.4 million; and unfunded pension liability of $1.7 million; and a need for between $3.5 million and $4.5 million in repairs and upgrades to the township highway and police department building on Heather Place, and the township offices beneath the firehouse on Farmington Avenue.

However, questioning by residents revealed that of that $8.4 million debt, only about $4,728,507 of that debt is held by the sewer system.

The $8.4 million total also includes about $2.1 million in debt in the open space fund, which could be paid back with proceeds from the annual earned income tax dedicated to open space, and another $2 million in general fund debt.

Taylor called the slide outlining the township's debt, without revealing that only half is attributable to the sewer system itself, "misleading." He asked "how do the commissioners justify using money from the sale of the sewer system to pay down general fund debt?"

Not all of the township is hooked into the sewer system, and Taylor and several of the 47 people who participating in the online meeting asked why those who have never paid into the sewer system should benefit from the sale of an asset only those on the system have paid to improve and maintain.

When Limerick Township sold its sewer system to Aqua PA for $75 million in 2018, township officials used the proceeds to pay off township debts not related to the sewer system and invest $55 million into its capital for future needs, like new firehouses in Limerick and Linfield.

At the time, Limerick Township Manager Dan Kerr said the number of people in the township not on the sewer system was small. Limerick, Kerr said, has about 6,500 parcels and about 5,800 sewer accounts, meaning the system served a little over 89 percent of the parcels in the township.

Put another way, about 35 percent of Upper Pottsgrove's parcels will benefit from the sale of a system they have never used and never paid for.

But Marc Feller, an attorney for PFM, offered another perspective. He said paying down the general debt will lessen pressure to raise taxes, which benefits those hooked into the sewer system equally with those who are not.

PFM, which stands for Public Finance Management,  has also handled the sale of Royersford's sewer system to Pennsylvania American.

Under its agreement with the township, PFM waived its $7,500 fee to assess the system and begin sounding out bidders. Instead, it will be paid $50,000, plus 1.5 percent of the sale price, but only if the system is ultimately sold, as I reported last May.

That means as the bid now stands, PFM stands to collect $256,000 if Upper Pottsgrove sells the system to Pennsylvania American Water. It will be paid nothing if the commissioners decide against selling.

I'll leave it to you to decide if you think that is the best way to guarantee unbiased financial advice.

Feller further emphasized a point made in the township's letter, that professional management of the system is a benefit. "I live in a township in Bucks County with a municipally owned system and the rates recently went up 37 percent," he said.

"Many townships have not kept up with their obligations and rates have been kept artificially low over the years," he said.

But resident Robert Rowe said his research has shown that many municipalities that privatized their water and sewer systems have taken them back under municipal control after costs went up by 20 percent.

Monday's cyber meeting was not the first. Similar online meetings, which Feller said satisfy the state's Open Meetings law, are scheduled for April 8, 14 and 16. Slinkerd said the township will increase its capacity from 100 to 200 for the next meeting.

Instructions for how to join that meeting, either online or by phone, are included in the letter sent to all residents and are posted on the township's website.
Posted by Evan Brandt at 12:00 AM