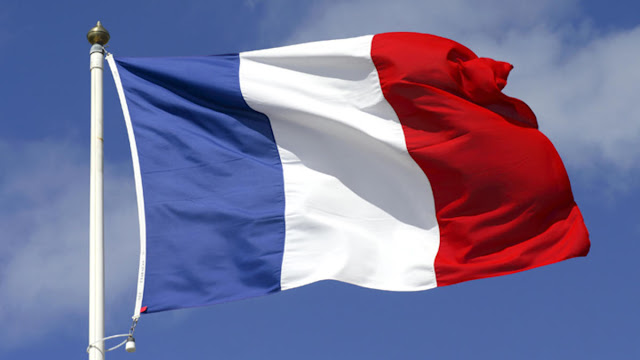 After years of discussion, the Pottsgrove School Board voted 5-2-1 Tuesday night to add a third world language to it's curriculum.

And just in case you're not up on your vexillology, which, as we all know, is the study of flags, and the above photo has left you flummoxed, the language Pottsgrove added is French.

Board members Bill Parker and Patricia Grimm voted against the measure, which was not on the meeting agenda and was brought to the floor at the request of Superintendent William Shirk. Board member Charles Nippert abstained from voting, but did not give a reason for his abstention.

Shirk indicated that the board has been nibbling around the edges of the question, and asked that the board "commit," so his administration could immediately begin looking for the best French teacher they can find.

"If we wait until August, that's not going to work," he said.

"If we're going to do it, we should really commit to it and do it right," agreed board member Scott Hutt.

Currently, 66 students have already signed up and the cost has been built into the preliminary budget.

(On that front, Business Manager David Nester had some good news -- the projected 2.1 percent tax hike now looks like it would be closer to 1.5 percent unless something changes.)

"It might cost us a couple of extra bucks to get someone who has experience," said Shirk. "But it might be worth it. We want someone who really knows how to build a program."

As of now, there has been little drop off in the other two languages offered in Pottsgrove -- German and "Spanish -- said Shirk, noting that feeder programs in the middle school "will fill those gaps."

Board member Jim Lapic also noted that some students intend on taking more than one language.

In other new program news, board member Ashley Custer, reporting on discussions in the board's Curriculum, Integration and Technology Committee, said the district may add an advanced science course at the middle school, most likely Biology.

French Press
Posted by Evan Brandt at 12:00 AM