Can Phoenixville's Success Happen in Pottstown?

Blogger's Note: The following was provided by Hobart's Run.

About 25 Pottstown leaders from government, business, and education met over breakfast on Wednesday, to hear insights from Manny DeMutis, president-owner of The DeMutis Group, Phoenixville, a highly successful developer who has helped to lead Phoenixville’s impressive revitalization.

This event, held at the Hobart’s Run office at 701/703 High St. was one of an ongoing series of informal monthly breakfast meetings hosted by Hobart’s Run and The Hill School to spark collaboration and information-sharing in the borough.

Joining DeMutis was Barry Cassidy, who served as director of Main Street Development Corporation in Phoenixville from 2003-2010 and a planning and development consultant. DeMutis was introduced by his friend, Charles Gulati, owner of Gatsby’s at The Sunnybrook Ballroom, Pottstown, and owner/president at Stokesay Castle and The Knight’s Pub, Reading.

DeMutis says Phoenixville’s renaissance has occurred largely because of the “selfless leadership” of developers and others who have been willing to invest in the once-struggling town and collaborate with one another.

He enthusiastically shared a number of key takeaways for the participants at this gathering.

Among the points he hammered home for potential Pottstown investors and Borough officials and residents in general are the following seven observations:

1: While Pottstown folks are quick to compare Pottstown to Phoenixville and point to that community’s impressive reinvention and rebirth, Pottstown has more and even better assets than Phoenixville to work with.

“I love Pottstown,” DeMutis said. “You have housing stock to die for. You have a beautiful, wide main street. You have arguably the best prep school in the world, The Hill School, right in your downtown. 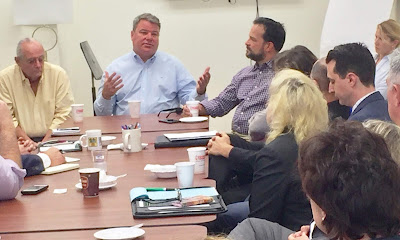 “Pottstown has the ability to decide what you want to be when you grow up. You need to go and ‘be’ that vision.”

2: Pottstown’s development needs to start with revisiting and reprioritizing codes enforcement issues. Much of its focus should be on strictly enforcing health, safety, and “life” related codes, particularly in residential areas near the downtown, as the main streets will then begin to “take care of themselves,” DeMutis believes.

The Borough also must be developer-friendly and cut back on nonessential red tape and fees, especially when investors want to restore and utilize buildings that are in great need of care. In addition, the Borough needs to make sure its fee schedule is not higher than it is in neighboring communities, which will make development here far less attractive and competitive.

3. Gaining the commuter train would dramatically increase property values and Pottstown’s tax base, among other benefits. DeMutis has invested heavily in planning for a pilot project that, if successful, will use some of Norfolk Southern’s freight rail tracks to link Phoenixville to the Norristown/Manayunk line.

“Ridership is not an issue,” he notes, adding, “It’s more an issue of ‘Can we afford to do this?’

“But if someone says ‘you can’t do it,’ they’re probably not right,” he declares. He emphasizes that when there is a passenger rail system within a three-mile radius of a house, the average affected homeowner sees an average increase in value of $31,000. The train would bring “instant equity,” DeMutis says.

Pottstown’s LERTA provides tax relief to approved properties over seven years. In the first year, after improving a property, the owner receives a 100 percent exemption on the taxable value of the improvements; by the seventh year, the reduction is 10 percent, and after that the LERTA relief ends.

Noting that LERTA programs encourage banks to lend to developers, DeMutis told Pottstown officials they “need to get out on the road and sell your LERTA to developers.”

5. Don’t be afraid of rental properties, as that’s the trend in housing, DeMutis says. However, developers should focus on getting rentals up to market value. Redeveloped Phoenixville apartment and other rental property rates have increased – and, in fact, many of these spaces have been converted back to single family homes.

6. Create and embrace downtown festivals of all shapes and sizes – and don’t let parking and other
concerns get in the way, DeMutis asserts. Phoenixville now offers at least 13 summer festivals, “synergistic, common experiences” that bring people to the downtown and create excitement in and about the community, he says.

7. “People investing in Pottstown should invest a lot more here,” DeMutis states. “You can’t replace the value of these buildings! As a developer, you may have the opportunity to buy a building in the Pottstown downtown for $250,000; you should buy as many as you can. I’m not kidding: When Pottstown takes off – and it will happen – you will be able to sell it, if you want to, for so much more.”
Posted by Evan Brandt at 12:00 AM