Texas and Pennsylvania: Separated at Birth?


UPDATE AND CORRECTION:
It turns out I'm not the only one who makes mistakes.

Apparently Reuters reported the striking down of the voter ID law in Texas in error.

So that kind of makes half my point in this blog based on an error. So feel free to ignore the first three paragraphs below and find what meaning you can from what remains.

This just in from Reuters:

"Federal court ruled on Tuesday that a controversial Texas voter identification law discriminates against black and Hispanic voters, effectively killing the law before it could take effect for the Nov. 6 presidential election.

The U.S. District Court for the District of Columbia issued the ruling.

The state law, passed by the Republican-dominated Texas Legislature in 2011, required voters to present one of six forms of photo identification before casting ballots.

In March, the Obama administration blocked the requirement using the 1965 Voting Rights Act, a federal law designed to protect the voting rights of minorities, primarily blacks in Southern states."

Maybe the Pennsylvania Supreme Court will recognize this as a precedent and also throw out our new voter ID law.

Then again, maybe pigs will fly.

The same day Reuters reported the demise of the Texas voter ID law, Associated Press reported that a federal court found that the new legislative districts drawn up by the same legislature had the same problem -- discriminating against minorities. 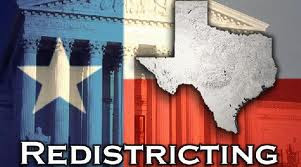 In some cases, black congressional members in Texas had economic drivers such as sporting arenas freshly carved out of their districts, though "no such surgery" was performed on any belonging to white incumbents, according to the U.S. District Court for the District of Columbia.

"Anglo district boundaries were redrawn to include particular country clubs and, in one case, the school belonging to the incumbent's grandchildren," said U.S. Circuit Judge Thomas Griffith, writing the 154-page opinion for the three-judge panel.

Opponents said the state's strategy of skirting the Justice Department backfired. Luis Vera, an attorney for the League of United Latin American Citizens, said the ruling was "better late than never" and an unequivocal win for his and other minority rights groups that sued the state.

How Texas redrew its political boundaries was watched particularly closely after the state was awarded four additional U.S. House seats because of its booming population. The surge has been driven almost entirely by minorities, who account for more than 87 percent of the population growth in Texas over the last 10 years.

So I don't know about you, but a population surge driven almost entirely by minorities should probably not end up short-changing the very people who gave you four more Congressional seats.

Here's my favorite part, the defense Texas chose was this: "We're not discriminating against minorities, we're just trying to get some partisan advantage for the majority party."

This is how AP put it:


The state's lawyers said the map crafted by the Legislature reflected a GOP majority seeking to squeeze a partisan advantage out of the once-a-decade redistricting process, not a willful disregard for the Voting Rights Act. The state also maintained that lawmakers kept a cool distance from the process, leaving much of the work of drawing districts to legislative staff.

The state also argued it was only a "coincidence" that district offices and economic drivers were removed from minority districts and not those belonging to white incumbents, according to the court opinion.

"But if this was coincidence, it was a striking one indeed," the ruling said. "It is difficult to believe that pure chance would lead to such results."

So does any of this sound disturbingly familiar?

As I wrote about back in January, the Congressional districts created by the Republican majority somehow passed muster while equally ludicrous state legislative districts -- including one that split Pottstown among three representatives -- was rejected by the courts.

It's a shame, sadly, that making crazy districts, including one that looks like Bullwinkle J. Moose, is legal as long as its only for unfair political advantage.

But maybe, it we keep along the same path, Pennsylvania can soon also be under the eye of the U.S. Justice Dept. as we develop a "history of racial bias."

Won't that be a proud moment for the Keystone state?