Paving the Way on the New Road of a New Day 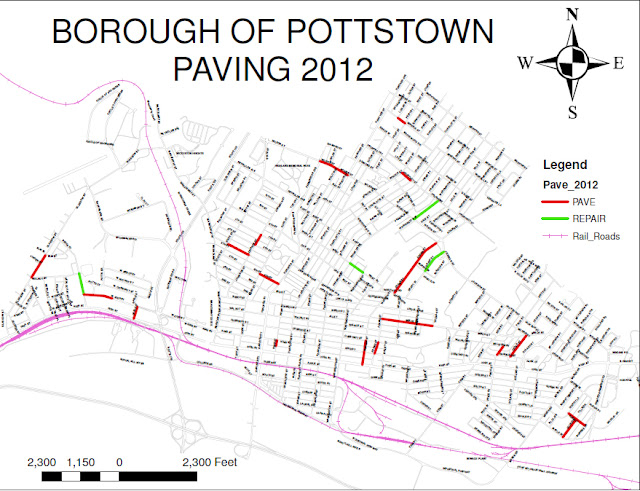 Ever since I bought my house in Pottstown, I have been mildly puzzled by the fact that one block of my street looks like it was hit by a steady barrage of mortar shells, but my block is, by comparison at least, as smooth as glass.

Of course, because like many streets in the borough, mine is one-way, I have to drive through the mine-field to get to my block.

In fact, when returning home, I usually turn in one block away from mine and take a cross street so as to avoid that mine-field.

Now granted, this is less of a hardship for me, then for my poor neighbors who have no choice but to put their car suspension at risk if they want to park in front of their house.

The map was provided to Borough Council on Aug. 8 and to me, after some cajoling, on Aug. 15 by Doug Yerger, the borough's director of public works.

Now, I understand I need to temper my excitement with the understanding that nothing is guaranteed.

Yerger told council that he had money available, as usual, from the "liquid fuels fund." This is derived from the state tax on gasoline and must be used for road-related expenses.

But he could not tell if the money available will be enough to complete all the roads shown on the map.

I don't know about you, but I'm keeping my fingers crossed, and maybe I won't have to keep taking cross streets.

Below is a list of the streets scheduled for paving as best I can make out from the map:

On the schedule for repairs are:
Well, I think that's all of them.