Get Your Space Geek On!

So if you grew up watching Star Trek re-runs on a black and white TV like I did; saw the first "Star Wars" movie in a theater with only one screen; or read Larry Niven, Ray Bradbury and Isaac Asimov science fiction novels until your eyes bled, chances are you're got your space geek on this weekend about what we did on Mars yesterday.

In case you don't know, we landed a rover the size of a Mini-Cooper on the red planet by lowering it on cables from a platform hovering above the plant's surface that was held aloft by rockets.

James Bond would have been proud.

The maneuver was so complicated and difficult, that the NASA engineers who created it dubbed the approach and landing "Seven Minutes of Terror." Their terror turned to joy, (as the video below shows), when the entire landing went off without a hitch.

(In case the video embed didn't work, you can click here to watch the video.)


Their anxiety was understandable, I suppose, when you consider that the whole shebang was approaching the Martian surface at 13,000 miles per hour.

And while James Bond gets to drive cool cars wherever he goes, he's got nothing on Scott Maxwell.

Maxwell is one of a dozen people trained to drive Curiosity, as the rover is named, from a driver's seat more than 100 million miles away.

Maxwell has a pretty simple explanation of what he does, offered on his blog, called, appropriately, "Mars and Me."

He wrote:  "At night, there's a small red light in the sky. On that light lives four hundred pounds of thinking metal sent from Earth. I tell that metal what to do, and it does it."

I am not the only person in the Pottstown area excited about this.

The folks over at the Chestmont Astronomical Society had some links to the landing posted on their web site, which is where I found the video I posted above.

They have good reason to be excited.

The timing gets people excited about space exploration just in time for their annual Starfest star gazing event. 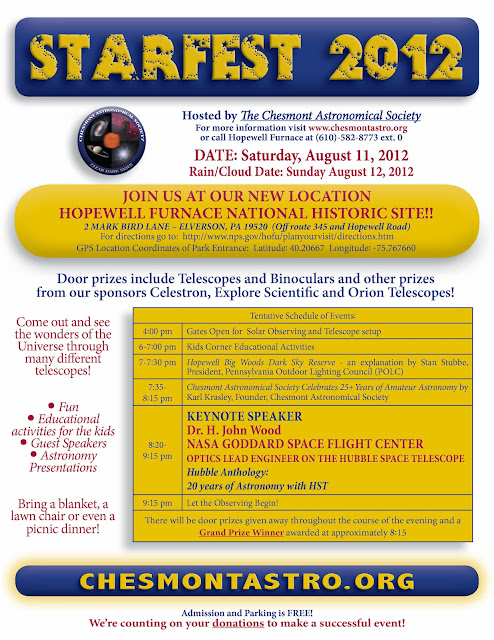 Dozesn of amateur astronomers set up some pretty spectacular telescopes, trained in specific celestial objects that you can view with their help.

The event is free, although making a donation would be much appreciated.

Held this Saturday from 4 to 11 p.m., this year's Starfest will be held at a new location: Hopewell Furnace National Historic Site. (The rain date is Sunday.)

Mars and Starfest have a strong local history together. 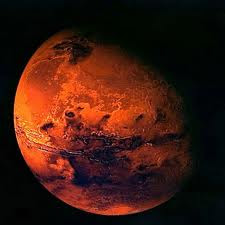 In the lead up to that event, I had about as much fun as I've ever had writing something for The Mercury when I wrote a two-day package of stories about Mars, the history of our fascination with it, it's role in our culture and the science behind the latest discoveries about the planet.

(This link will take you to the first day's story, about the science of Mars close approach, published on Aug. 17, 2003.

This link will take you to the second day's story, published on Aug. 18, 2003, which dealt with how Mars has affected human culture and civilization. That day's package also had a timeline of Mars through human history.)

Oddly enough, in all my science fiction choices as a kid, and yes, currently as well, I always passed over works about Mars (with the exception of Bradbury's Chronicles) because it seemed too close; not exotic enough.

But given the stage we human beings are at with our space travel, you've got to play the game that's in town and I imagine, we will be focused on Mars for a long, long time.