Double-Dips and Double Standards, the Farce that is School 'Competition' in Pennsylvania 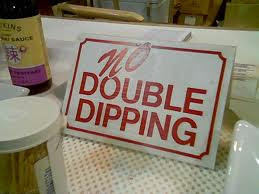 I have to hand it to the newspapers in Pittsburgh.

They are really doing some excellent reporting on the difference between the two kinds of public schools in Pennsylvania -- the kind you and I attended and charter schools.

This first came to my intention through daily e-mails I must have signed up for somewhere along the way. They come from Lawrence Feinberg on behalf of the Keystone State Education Coalition and are a round-up of the day's coverage of education issues in Pennsylvania.

Their links are archived here.

The first article that caught my eye was in the July 13 edition of the Pittsburgh Tribune-Review and was coverage of a really dry subject that adds up to big public dollars.

Here are the first two paragraphs:

"Pennsylvania charter schools are reaping a multimillion-dollar, taxpayer-funded bonus on pension reimbursements at the expense of public school districts, a coalition of school groups contends.

The associations, representing urban and rural schools, school boards, business managers and administrators, say the state’s calculation for the tuition that districts must pay for charter school students requires them to pay double the amount they should for employee pensions."

Public schools and charter schools alike both pay 50 percent of their state-sponsored pension costs, and the state pays the other 50 percent.

"But in addition, school districts must include the state and the local pension payments in their calculations for charter school tuition, a formula that theoretically provides charter schools with 150 percent of pension costs," reporter Debra Erdley wrote.

This is just one way that obscure funding formulas and non-existent oversight make for a skewed playing field in the "competition" between traditional public schools and charters -- particularly cyber-charter schools which receive the same "per student" tuition from school districts as regular charters which, like public schools, have buildings, heat, electricity, water and sewer and, usually, higher personnel costs to cover. 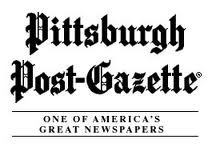 Not to be outdone by its cross-town rival, the Pittsburgh Post-Gazette has been doing some digging as well.

In addition to detailed coverage of the FBI investigation into entities with ties to Pennsylvania Cyber Charter School, the state's largest cyber charter operation, reporter Eleanor Chute filed this Aug. 12 objective report about the different rules that govern the two types of public schools.

The most recent and most blatant of these is the latest state requirement that student performance make up at least one-half the measurement for evaluating teacher performance.

That requirement, however, does not apply to charter schools where, by what I'm sure is pure coincidence, most teachers are not unionized.

Ira Weiss, solicitor for Pittsburgh Public Schools, told Chute he believes the current exemptions are so significant that it's like having two basketball teams, one with eight players and the other with 11.


"Various charter school proposals -- such as exclusion of charter school vendors from the state Right to Know Law, a commission to study funding and financial report requirements -- were debated up until the last minute when the state budget was passed in June and may surface again for debate next month," according to the Post-Gazette.

Exclusion from the state's Right to Know law is particularly worrisome and counter-intuitive to the cry for "accountability" from Harrisburg. Already given minimal oversight by the school districts which authorize them, charter schools of either type are spending public money to educate our students. Don't we have a right to know how that money is being spent?

Certainly the FBI investigation of Pennsylvania Charter's links suggests a close eye is needed, despite the efforts of some of the major players in the field.

One of Corbett's largest fundraisers, Vahan Gureghian, runs the state's largest brick and mortar charter school and has made overtures to open an operation in Pottstown.

Gureghian's Chester Community Charter School recently lost a years' long court battle with The Philadelphia Inquirer in which it fought a Right-To-Know request for salaries in the operation.

It should come as no surprise to Pennsylvanians that Tom Corbett's administration is friendly to charters. He has made no secret of it.


Pennsylvania's Budget Secretary, Charles Zogby served the commonwealth as the Secretary of Education under Governors Ridge and Schweiker from 2001 to 2003, and as the Director of Governor Ridge's Policy Office from 1995 to 2001.

But most recently, prior to his nomination, Zogby, served as the Senior Vice President of Education and Policy for K12 Inc, an online school curriculum developer and provider with ties to Pennsylvania Cyber Charter.

For those of a cynical nature, it's worth noting that the finances at K12 Inc. have raised a few eyebrows at the Post-Gazette as well.

The foxes truly are watching the hen house.

And, as an added bonus, researchers at National Education Policy Center at the University of Colorado recently reported that only 27.7 percent of K12 schools in the study met standards for adequate yearly progress, known as AYP, under the federal No Child Left Behind Act in 2010-11.

Again, this thanks to the Post-Gazette, the researchers said K12's scores were nearly identical to other full-time virtual schools operated by private education management organizations but below the estimated 52 percent of public schools as a whole making AYP that year.

So some virtual charter schools are falling away behind in AYP.

Surely, they too are on an "under-achieveing schools" list like the one to which Pottstown High School was just named.

In fact, as I understand the "voucher lite" program we've been writing about this month in The Mercury, a parent wanting to "save" their children from the failures at Pottstown High School could get a scholarship to send them to one of K12's schools, which are failing as badly or worse than Pottstown High School.

But given the absence of a similar state list for charter schools which are, you know, public schools too, how would a parent know this?

Why is this important?

Statewide, charter school enrollment increased from 67,100 in 2007-08 to 105,000 in 2011-12. That enrollment jump is coupled with the elimination of $130 million in state reimbursements to districts for charter school costs, and pension costs that are expected to triple to $3.67 billion by 2015, the Trib reported.

Problem is, the rules that declare traditional public schools  as "failing" don't apply to the charters parents are sending their children to, which may be just as bad. You just don't know it because the people writing the rules, are people who have gained or stand to gain financially from increased charter school enrollment.

That's the American we live in today.

As more and more of our tax money gets funneled to charter schools, we need to know more about them, not less. And if they are to be held up as alternatives to traditional public schools, let's hold them to the same standards and rules as those public schools so apples can be compared to apples.

But cynics might argue this will never happen because too many important people are champions of this unfair contest not just for philosophical reasons, but for financial reasons.

Here are a few of the statistics the state likely will not go out of its way to tell you about those school alternatives to which we're supposed to be sending our children to save them from the "failures" like those at Pottstown High School They are courtesy of the Keystone State Education Coalition: 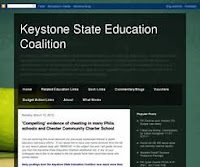 So it turns out, that excellent advice "Deep Thorat" gave all those years ago in a dark Washington, D.C. parking garage to Bob Woodward still holds true -- Follow the money.

That's what the Pittsburgh Post-Gazette did.

Have look below and you'll see what they did -- if you can follow it. 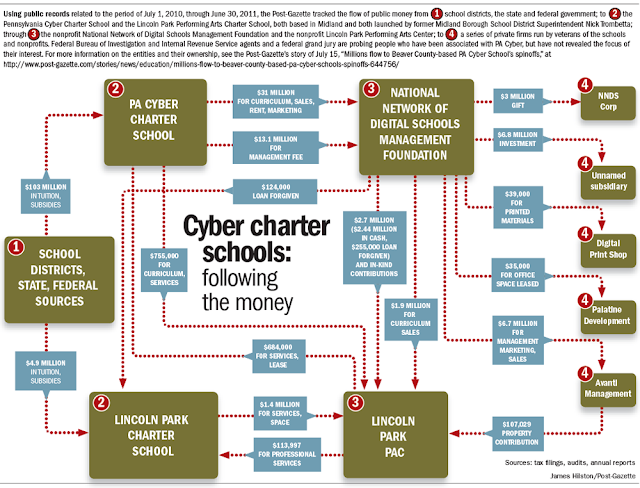