One week after a split vote reversed a June vote requiring masks be worn by children in grades K-6, the Spring-Ford  School Board did another turn-about Monday night.

With a unanimous vote, the board adopted a plan crafted by Schools Superintendent Robert Rizzo that will require masks only of students and staff in grades kindergarten through 6 and only until Sept. 24, when the policy will be re-evaluated based on the number of cases in the community.

Rizzo said he has been told by Montgomery County health officials that they believe the current spike in COVID-19 cases is just that, and that they will drop back down again in the next three to four weeks.

Should that not happen, and community transmission rate remain in the "substantial" category, the mask mandate for those grades would remain in place. 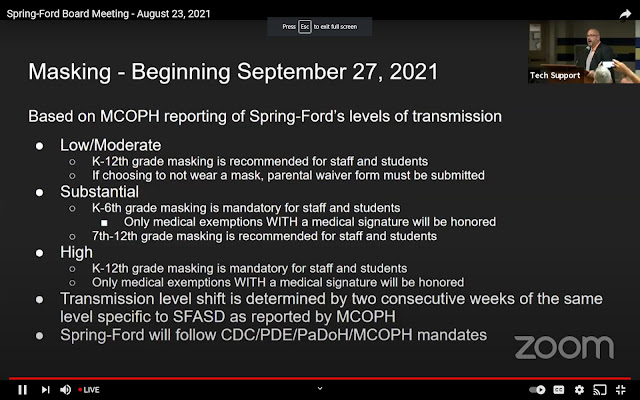 For grades 7-12, masks will be recommended, but not required. Students not wearing masks will be required to provide a permission form signed by their parents, which is separate and distinct from a medical excuse form, which permits a student to not wear a mask under any circumstances.

Should community transmission rate in the towns which comprise the Spring-Ford district, reach the "high" level, all students and staff in the district will be required to wear masks, with the exception of those with a medical excuse, under Rizzo's plan.

Rationale for the change was offered by School Board President Colleen Zasowski.

"If we don't do this, and we have to quarantine, we're going to have too many kids out of school who don't need to be. And they won't have" the full virtual option like the one offered last year.

"They'll have Wednesday, every day," she said in refence to having no live instruction.

She added "we've had the most emails we've ever received over the past week. I appreciate the information that came over, certainly information presented in a positive way," Zasowski said, adding that "some of the emails were very caustic"

"We need to try to do something to unify our community," she said. 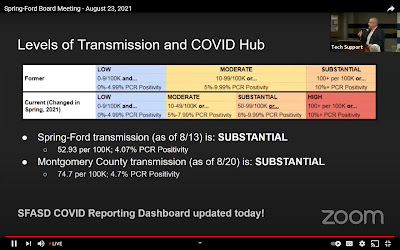 Reading a statement provided by head nurse Trish Smith, who was not allowed to speak last week, for which Zasowski apologized, Rizzo noted that last year Spring-Ford ended up quarantining 2,000 students as a result of close contacts with infected students or staff "and none of them got COVID."

"Let's have the numbers dictate the rules," said Rizzo. "We need to keep our schools open and keep our children in school."

Rizzo also noted that the matrix governing community spread has been changed since the last school year.

There are now four categories -- low, moderate, substantial and, a new category, high -- as opposed to the previous three, and the number of cases comprising the four categories have been narrowed. 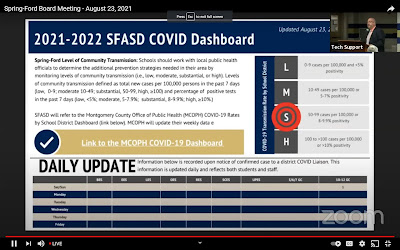 As a result, Spring-ford's "COVID Dashboard" has been updated as well and is now posted on the Spring-Ford website https://www.spring-ford.net/academics/2021-2022-dashboard

Rizzo explained that he chose the Sept. 24 date to revisit the mask mandate because it will come after the Sept. 20 board meeting.

In the past, the district has been criticized by parents for changing things at the last minute and the Sept. 24 date, if things change, will give parents time to make adjustments.

However, before voting unanimously to support Rizzo's plan, four board members supported a motion made by Linda Fazzini to extend the period during which K-6 students must be masked from Sept. 24 to the end of the first marking period in November.

However, only Fazzini, Christine Melton, Margaret Wright and Diane Sullivan supported that option.

Even as viewed on YouTube, the meeting was tumultuous, even though the camera operators muted the sound when members of the audience cheered, jeered or heckled speakers.

Toward the end of the meeting, one speaker said that a high school student of Asian heritage who spoke in favor of masks told her during a break that members of the audience had told her to "go back where you came from."

Zasowski repeatedly chided in-person audience members to be quiet; to only hold up their protest signs when they were speaking; and to "speak to the board and stop trying to rally the crowd."

At one point she threatened to involve the district police officer to restore order and, at another point, threatened to end public comment, which stretched on for two hours before the vote.

The first hour of public comment was devoted to those who spoke via Zoom.

With only a handful of exceptions, the majority of those who addressed the board this way spoke in favor of masking in some form, with the option chosen by the board, masking mandated for students in grades K-6, being the minimum.

Many asked for mandated masking for all students and staff at all grade levels.

Shaila Quazi is a physician in emergency department with two children, ages 5 and 7. "There's no cure for this disease. I'm seeing lots of kids come in with COVID after traveling to southern states," she said.

Quazi said the most prudent thing to protect everyone is to lookahead, "know that communicable diseases will be part of the agenda in perpetuity. Wearing a mask is not a very difficult way to avoid diseases that have no cure or treatment."
Liz Kepner said everyone has their own opinion on masks. She urged the board to keep kids in school, specifically K-6 kids who cannot be vaccinated by requiring masks. "Recommending means optional and optional does not protect all" she said.
"'Recommended' is code for optional," said Nicole Baskwill. "But when it comes to public health, optional doesn't cover it. You have a moral imperative to rise above partisan politics and do what's best for public health,"
Michael Krajnik said without mask mandates, "you will see what is happening in southern schools, lots of quarantine," noting that when K-6 students have to quarantine, at least one parent has to quarantine with them as well.
But not all Zoom callers were pro-mask.
"You are proposing to mask children for reasons that have nothing to do with health," said Mari MacDougall. "I'm tired of hearing about cases. Are children dying? No. Not one Spring-Ford child has died from this."
The views expressed by those who spoke in person were more mixed.
Owen Olson. who was the first of the in-person speakers, said Rizzo's presentation "should have been part of the agenda materials posted. If you think you got a lot of emails last week? Wait until this." Olson said he wants to see data that shows masks work. "None exists, zero."
Michael Lebiedzinski said the board is suffering from "mask psychosis," adding that "most schools in Europe are not masking."
Resident Gary Wheaton said the masks as used now, "don't work," because his son brought COVID-19 home.
He said if the district is going to require masks, it should set a standard and provide the higher quality masks, like those used by medical professionals, to get the desired affect.
Without giving them N-95 or K-95 masks to kids, "you're giving them a false sense of security," he said.
"Nothing has changed to warrant this," said Stacy Salazo. All health guidance remains the same. "The only thing that has changed is a weeks' worth of feedback from the community."
Mary Jo McNamara offered up some numbers, specifically, the number zero, noting that no Spring-Ford students were admitted into the hospital. "Students dying from this pandemic in our district? Zero." In Montgomery county, 96 adults have hospitalized in a population of 830,000," she said, adding "not a single pediatric ICU bed being used in county."
Click here for a Twitter recap of last night's meeting.
Posted by Evan Brandt at 12:37 AM