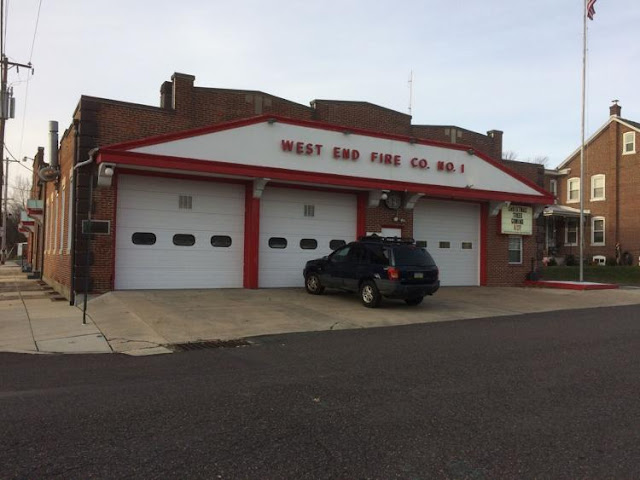 West Pottsgrove Township Commissioners will hold a special meeting tonight, June 22, at 7 p.m. at the West Pottsgrove Elementary School auditorium to discuss the viability of West End Fire Company as the fire protection provider for the township.

All residents are invited to attend and ask questions and express their opinions.

Although friction between the township and the fire company has been on a low boil for some time, the issues were addressed publicly in April.

Here is part of that story, which can be read in full by clicking here.

During the April 21 commissioners meeting, board Chairman Steve Miller issued a lengthy statement saying, in part, that the fire company has suffered from a "lack of accountability," that "their leadership has been a revolving door."

Saying, "They are on their second chief and fourth president this year," the company has failed to pay back township funds used to buy air packs and repeatedly ignored problems with "black mold" in the firehouse basement.

Miller said the township made concessions on debts owed "but after every meeting, we seem to find ourselves in the same place. New leadership and a hostile attitude toward township leaders."

The township also reported that from Dec. 16 to April 13, there have been 28 incidents to which the Pottstown Fire Department and West End have both been dispatched, and seven of those times, West End never responded.

The fire company fired back with its own statement from company President Ryan D. Machir saying statistics about a failure to respond are "absolutely false" and a "bold-faced lie."

The fire company statement also charged that "the fire company has been made a pawn of the political aspirations of individuals in the upcoming West Pottsgrove Township elections."

The relationship between the township and the fire company has been rocky for the past year or more, as was evident in December when the commissioners reached out to Pottstown Borough about formalizing a "mutual aid" agreement with the borough's firefighters, talks which Miller said are ongoing and were undertaken "to ensure the residents of West Pottsgrove had reliable fire protection services."

Also plaguing the fire company's finances and reputation is the alleged embezzlement of $43,000 in fire company funds by its own treasurer. Kengra S. Taylor of Upper Providence is currently awaiting trial on those charges.

"Following the theft that took place from the company, the organization has made strides to implement better financial controls, a deficit that stemmed from dated bylaws that hadn’t kept up with the digital age," Machir wrote.

The loss from the alleged theft has been compounded, the fire company statement acknowledged, by an IRS claim for unpaid wage taxes when the fire company operated a bar in the basement to raise funds.

The bar is now closed and black mold was confirmed there in December by a specialist sent in by the township. A follow-up inspection by the township code officer found "multiple issues" and, as a result, the basement was condemned and a padlock put on the door, Miller said.

"Since that time, multiple locks have been cut off by company members and a pattern of blatant disregard for the posted notice has been displayed. The township pays the company’s workman’s comp, we are greatly concerned with their willful disregard of the health issues in that area," Miller's statement said.

"While there had been miscommunications taking place internally among West End Fire Company membership, which led to locks being cut off the doors during the public auction that took place recently, there have in no way been any individuals sleeping or partying down in the basement area of the building," according to Machir's statement. "The locks had been placed there by the company board for the protection of members and the public and have since been replaced."

There are also disputes regarding the financial arrangements between the two organizations.

At the April 21 meeting, the commissioners said they offered to match fire company fundraising dollar-for-dollar up to $35,000, but that no fundraising had been done.

The fire company has replied that the township provided nothing in writing regarding its match offer and that, in fact, "the company did hold a boot drive and Christmas tree, wreath, and poinsettias fundraiser. Other fundraising efforts have been severely stalled due to the worldwide COVID-19 pandemic that is still affecting all aspects of everyone’s lives over a year later."

"West End has again defaulted on the air pack repayment program since it was revised on Feb. 16, 2021. At that meeting they were advised funds given by the township were to be used on paying off the IRS lien, mold remediation and building maintenance, specifically the water, plumbing and HVAC issues. No progress has been made on these issues," said Miller.

"The company in years past under the direction of a past president, entered into a sublease agreement with West Pottsgrove Township for the repayment of the air packs, the terms of which had not come to the company body for approval until after the president signed the repayment terms," according to Machir's statement.

"Under the agreement, West End Fire Company would be required to pay to the township an annual sum of $24,009. It was the intention of the company to pay $15,000 of this from an annual grant from the state fire commissioner’s office (which the company has still not received for Fiscal Year 2019-2020)," Machir wrote.

"Relating to residents’ concerns about defunding the fire company, that could not be further from the truth," Miller said. "The township continues to pay their workers comp, gasoline, vehicle insurances and liability, air pack payments and purchased radios that cost the township $50,000."

"The stripping of funding in 2021 by West Pottsgrove Township, has only compounded the financial problems the company currently faces," according to the fire company statement.

In previous years, "the township gave funds in the amount of $35,000 annually towards the operations of the fire company," according to its statement.
Posted by Evan Brandt at 2:02 AM