Blogger's Note: This article was written by Katie Scanlan, Pottstown's self-described "Crazy Chicken Lady" and is re-printed here with the kind permission of the Delaware Valley Journal where it first appeared.

When the pandemic began, our family was mourning the loss of my uncle, schools were being closed, our jobs became work from home, and grocery stores were being cleared of essentials. Knowing that portions of Pottstown had been classified as, or were bordering food deserts for many years, I was primarily concerned with assuring that if my family was to be confined to our property indefinitely, we would be food secure.

That is when my journey into being Pottstown’s “Crazy Chicken Lady” began.

I purchased six chicks and all the supplies recommended for rearing them in March, 2020 and began learning all I could about backyard chickens. My volumes of urban agriculture books along with blogs, backyard chicken groups on social media, and an online course from Penn State, helped to educate me about how to raise and tend to my new feathered friends.

We are situated on a corner lot and only share one edge of our property with neighbors and our other three property lines border streets and an alley. Our neighbors have been dear friends for over 20 years. The last thing we would want to do is to jeopardize our relationship with them. We called and talked to them about our chicken adventure in early Spring and they were all in. 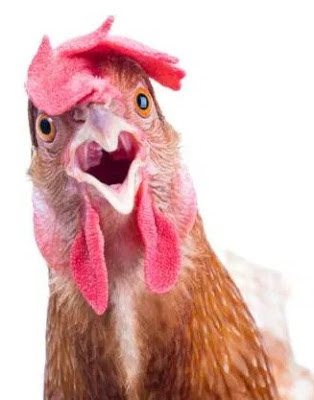 Everything was going well until around mid-June of 2020. That was when one of our hens decided she was a rooster. One morning, well before the sun was up, our Silkie chick, Marshmallow, started crowing. Within hours I knew action was needed. He was cock-a-doodle-doo-ing like a madman. He was driving me nuts and I could only imagine what our North End neighbors might be thinking. After 3 days of trying rooster collars and lots more reading, I began calling farm friends to ask if anyone might need a handsome and very vocal Rooster. I had a taker almost immediately and Marshmallow went off to a more suitable home with six new hens with whom to socialize. He was thrilled, and so were we. roosters are too noisy to keep in town.

The summer went by quickly and we learned how effective our small flock was in controlling ticks and mosquitos in the yard. They ate all the spotted lanternflies, munched weeds, and provided hours of entertainment along with excellent fertilizer for our gardens! Egg production was ramping up and we had enough for our family of four and some to share with a friend (accomplice) who helps tend our hens on occasion.

The town ordinance was not on my radar while we were in full pandemic mode.

By Autumn, however, I knew we were committed to our hens and started learning of the backyard chicken underground in town. If you haven’t heard of the chicken underground, it is because hens, if well maintained by responsible owners, are really quite lovely pets. They make far less noise than our dogs and are much easier to keep clean. Have I mentioned how yummy the eggs are?
Not being a rule-breaker in general, I decided to reach out to the borough and try to be part of a reasonable solution by proposing a few options. When I contacted the borough, I was advised that I would not have to take action regarding my hens until the Spring and that it would be helpful to make a presentation to Council regarding my proposed changes. I provided that PowerPoint in an email in early January and asked if I could have time to present. That is when the floodgates of the zombie chicken apocalypse opened. All of the details of the timeline and the benefits/concerns about having hens in town are well documented by journalist Evan Brandt in his coverage of the issue, so I won’t reinvent the egg on that front.
Suffice it to say that since January, and after making my initial attempts to collaborate with the borough on updating the ordinance, chicken chaos abounds. I have received a citation which levied the maximum allowable fine of $500 with $93.75 in court costs. Borough council meetings have felt more like circus events with a ringleader who is anti-chicken and who happens to be the council person in charge of my ward. It should be noted that this same councilman was one of the first people I contacted to help support a collaborative solution to work together to review the ordinance. (I’m told that the battle to allow murals in town was similar a few years ago.) The entire process has been demoralizing, and exhausting. It has taken focus away from important issues with education and infrastructure in our town and has diverted it to useless clucking about an issue that, if complaints and citations are to be relied upon as indicators of the potential problem, is a non-issue.

Based on the investigative journalism of Evan Brandt, it appears I have been targeted to provide an example of what happens when you try to affect positive change (i.e.: get an ordinance changed) in Pottstown. Despite this, I will not allow this story to be a cautionary tale to my children and to other community members. It takes a lot to ruffle my feathers and I am committed to seeing this through to a reasonable solution.

Responsible and respectful backyard chicken ownership is possible in Pottstown and other urban locations. I have been doing it for over a year. We won’t solve tomorrow’s problems in Pottstown with the same thinking that got us here. It is time for a change. Hopefully, I can be part of that positive change by starting by making my little corner of Pottstown, in the 5th Ward, a bit more green.
Posted by Evan Brandt at 12:00 AM