If the budget approved for advertisement by the Phoneixville School Board last night is ultimately approved, property taxes will increase by 1.57 percent in the coming school year.

Jeremy Melber, the district's finance director, presented the budget draft which, under a previous presentation, had carried a tax hike of 1.65 percent, which he and the administration were able to reduce.

According to Melber, the advertised budget would increase the current millage from 31.82 mills to 32.32 mills.

The median assessed property value in Phoenixville is $138,970, according to Melber. If that seems low to you, that translates into a fair market value of $296,000, he said.

If the budget is passed without change -- the tax rate can go down but not up at this point -- that translates into an annual property tax hike of $69.49 for the owner of the median assessed property. 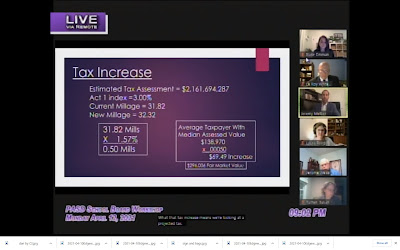 The budget contains no new positions or programs for the coming school year, according to Melber.

That was a problem for board member Christopher Caltagirone, who said that means yet another delay in implementing a world language program at the elementary level. Caltagirone cast the only vote against the budget.

Board President Blake Emmanuel said current plans call for implementing world languages for the elementary grades in the 2022-2023 school year.

Board member Jerry Weiss thanked Melber "for getting the tax hike as low as it is."

Melber had also been asked to try to project out a five-year budget, the accuracy of which he expressed his doubts, noting that even going out one year can be a guess. "Just look at what happened two months into last year," he noted.

Weiss, agreed, saying "a look of more than two years would require a Ouija board."

Click here for some Tweets from last night's meeting. They are anything but complete given that I was trying to cover both the Phoneixville and Spring-Ford school board's at the same time, neither of them well, apparently.

For a complete recording of last night's meeting, check out the video recording on the school district's website.