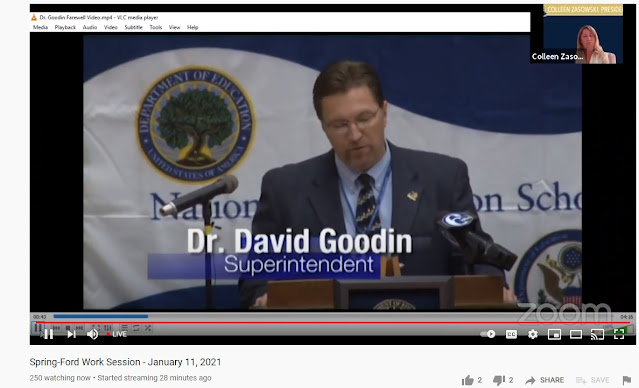 The Spring-Ford School community said goodbye to departing superintendent David Good Monday as the first meeting of the year marked his last.

Goodin made the surprise announcement last month just before the holidays.

He has accepted a job as the superintendent of schools in Sampson County, North Carolina and is returning to his native South to be closer to his children and grandchildren.
Monday night, the school board voted unanimously to accept his resignation, and then treated him to a video celebrating his accomplishments and allowing staff, board members and other members of the community to wish him well.
State Rep. Joe Ciresi, D-144th Dist., was on-hand in person to wish him well. A former long-time member of the school board, Ciresi was on the board when Goodin was hired nine years ago.
Goodin moved the district forward and "you are leaving a great legacy," he said.
"You've helped create a school district to be proud of," said board member Linda Fazzini.
Board member Tom DiBello was also on the board when Goodin was hired and at the time, the district "was not moving in the right direction."
"Now Spring-Ford is one of the top districts in Pennsylvania," DiBello said. He noted that at times the two have clashed, but that they always knew each was trying to do his best for the district.
"The accomplishments over the last 10 years are almost too many to count," DiBello said.
"This district is better off because you were here," said board member David Shafer, who was also on the board when Goodin was hired.
"School districts don't move forward because of the efforts of just one individual," Goodin said when it came time for him to give a report. he praised his staff and administrative team, and the community for helping support the improvements and accomplishments the district pursued.
He saved special praise for Assistant Superintendent Robert Rizzo. "I am leaving the district in capable hands, but it's time for me to go home and be with my family," Goodin said.
The board presented Goodin with a framed map of the Spring-Ford School District and he wished the district "all the best moving forward."
The search for his replacement will begin with a search for a firm to search for his replacement.
Last night the school board unanimously agreed to allow the administration to being contacting firms that specialize in superintendent searches and to provide information on that search to the board at the meeting in two weeks.
Click here to read the Tweets from the meeting.
Posted by Evan Brandt at 12:00 AM