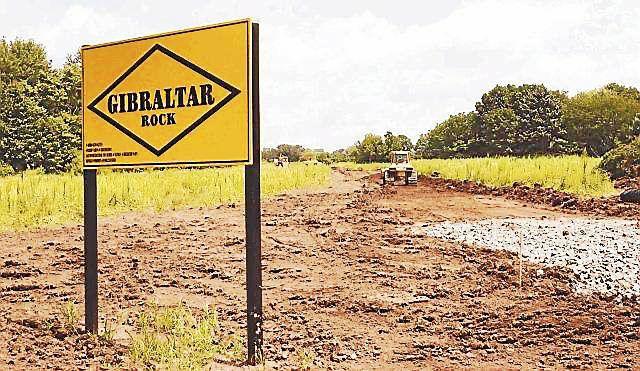 The meeting had just one business item on the agenda, "consider a motion regarding a final plan application for Gibraltar Rock."

The meeting came 12 days after the township planning commission voted unanimously against recommending an approval of a final site plan for the project, which has been a legal and political football for 19 years.

In many ways, Monday night's meeting was a re-hash of the planning commission meeting, although, thankfully, it too was not four hours long.

As they did for the planners, township consultants gave the supervisors an overview of what they see as the inconsistencies in the plan that has been revised three times since the preliminary approval was granted in 2015.

Then Stephen Harris, the attorney for Gibraltar Rock, who has been with this application longer than all of the supervisors and nearly all of the township staff, gave a lengthy rebuttal to those points.

What was new last night was a request by Harris that Supervisor W. Ross Snook recuse himself from voting due to his work as a consultant for the township in 2015. Harris described that work as "opposing" the project.

According to the minutes of the township supervisor meeting of Aug. 10, 2015, Snook was hired “as a consultant to assist with Gibraltar Rock at an hourly rate of $90. Work assignments and requests for payment will be reviewed and monitored by the solicitor and township manager,” according to the minutes.
All total, Snook billed the township for more than $93,000 from November of 2015 through August of 2016, but he withdrew a bill for more than $28,000 after it was questioned by then supervisor candidate Shawn Malloy.  At the time, both Snook and Malloy were both Republican candidates for supervisor.
In November 2017, Snook was elected, running on both the Republican and Democratic lines, as was Marie Livelsberger, who, running as a Democrat, defeated Malloy by nearly 400 votes.
(It was Malloy's complaint about her nominating petition had bumped Livelsberger off the primary ballot. Ironically, Malloy's petition had the same technical deficiency as Livelsberger's, but since she filed no complaint, he remained on the November ballot only to be defeated by her anyway. Later that month, he was arrested in connection with a domestic dispute and earlier this year was sentenced to prison for witness intimidation. Did I mention he was a former cop in Conshohocken? Anyway, enough ancient history).
Anyhoo, Snook replied to Harris that he had no intention of recusing himself.
Snook said, "this is my home as well and I will be voting this evening."
But it turned out he was wrong about that because, there was no voting.
As the night wound its way through the labyrinthine maze of approvals, re-submissions, zoning hearing decisions and plans, it slowly became evident that Harris had led the discussion to the point where a vote might be viewed as premature.
Given the legal history between the township and Gibraltar -- "I recognize this township has opposed this quarry from day one," Harris said at one point -- it seems likely the township, which had a court reporter taking verbatim minutes of the meeting, wanted to be sure it was providing Gibraltar with every opportunity to comply with the conditions of the preliminary approval.
Legally, the board has until Dec. 9 to act on the planning commission's recommendation and Township Solicitor Andrew Bellwoar suggested it would be fair to allow Harris and his client time to decide whether or not they want to submit a revised plan that addresses the issues raised by the township consultants.
That decision, about whether to submit a new plan, will likely be made before the Dec. 9 deadline, thus still allowing the supervisors time to vote on the planning commission's recommendation, or allow the ninth time extension since the preliminary plan was approved in 2015.
Chris Mullaney, the attorney who has represented the Paradise Watchdogs/Ban the Quarry activist group had few good things to say about the delay.
He said Harris suggesting the township is "acting in bad faith," as he did during the planning commission meeting is "the pot calling the kettle black," noting the township is "bending over backwards" to accommodate Gibraltar Rock.
"We'll all be back here in February and its my guess the applicant still won't be able to comply with all the conditions," Mullaney predicted.
The supervisors then moved on to a budget workshop.
Click here to read my Tweets from the meeting.
Posted by Evan Brandt at 12:00 AM