As coronavirus impacts continue to ripple through the rhythm of "regular life," the Pottstown School Board is taking steps to adapt.

Thursday night the board voted unanimously to allow the administration to furlough workers whose work has vanished with the absence of students and teachers in the borough's school buildings.

As much as possible, said Superintendent Stephen Rodriguez, hours will be reduced or work re-purposed to keep as many people on the payroll as possible.

Even for those who are furloughed, or have their hours reduced, the district will continue to pay its share of their medical insurance, explained Deena Cellini, the district's personnel director.

The district has also come up with a way to continue to distribute breakfasts and lunches to its students, brilliant in its simplicity.

Every Monday, anyone with one or more students in school can come to Pottstown High School between 7 a.m. and 7 p.m. and pick up five breakfasts and five lunches at the cafeteria door adjacent to the auditorium at the front of the school.

Unlike in the spring, Rodriguez said there will be more variety in the meals. "All students are eligible," he said urging parents to take advantage of the benefit and using the money saved for other needs.

Those without vehicles, or who are otherwise unable to come and pick up the meals, can register to have them delivered, said Rodriguez. 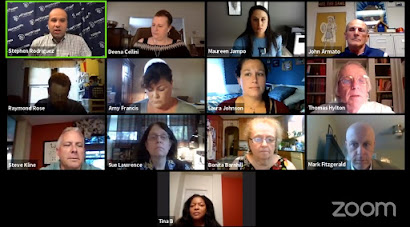 They will also be delivered on Mondays, between 8 a.m. and noon.

"This is so much better than the spring," Rodriguez said. "I honestly feel this is the best distribution plan in the entire state."

Rodriguez also told the board that the district has been aided by $1.7 million provided by Montgomery County out of the $15 million i received from the federal CARES Act.

"And they distributed it based on our title 1 population, which was nice because it means we got money proportional to our need," Rodriguez said.

"It has to be spent on COVID-related expenses, but that's OK, because we've got lots of them," he said.

Although some employees are being furloughed, there is still hiring going on at this time of year. One such hire was the replacement of yet another vice principal at Pottstown Middle School.

Kimberly Boswell, who held the post since November, 2018, has resigned. She will be replaced by Danielle Davis, who will start in October and be paid $82,781 per year.

Ironically, the measures which gave the board the most pause Thursday night was the decision to stop providing busing, as neighboring Pottsgrove did last week.

It's ironic because Pottstown is a walking school district for the most part, and the district does not provide busing to its elementary school students, all of whom live within a mile of their school in the five-square-mile district.

The result of this decision is that the district also will not provide transportation to students who attend non-public schools.

"I was really hoping Pottstown would be providing transportation for non public school children," resident Amanda Godshall posted in the comments during the board meeting, which was streamed live in the district Facebook page.
"Your decision not to is going to create a hardship for many families. I would think that providing transportation would be helpful with regard to giving people their jobs back after being furloughed for so long," she posted.

But board member Raymond Rose worried that the decision not to provide busing "will ultimately hurt students, even if they're not our students."

However, given that the district is not transporting its own students, Rose "reluctantly" joined the other board members in voting to discontinue busing.