Pottstown's century-old storm sewer system, overloaded by heavy rainfall two summers in a row, is getting some help from Harrisburg -- $600,000 worth of help.
State Rep. Joe Ciresi, D-146th Dist., announced the award of a $500,000 small water and sewer grant, and another $100,000 H2O PA grant for the borough.
Both will be used for the ongoing stormwater arch rehabilitation project, which includes a comprehensive inspection, evaluation and repair in the 60-mile system of brick, stone and cement storm sewer arches that crisscross the borough.
Most were once small streams, or "runs" that did not always flow, and over the years, as the borough was built out, they were slowly bricked over to increase land for development.
The stream that has plagued Walnut Street is called Goose Run and first goes underground opposite Lincoln Elementary School at North York and Eighth streets.

The most recent round of funding comes through the Commonwealth Financing Authority.

“While stormwater and sewer infrastructure is usually not at the top of people’s minds, it’s absolutely critical to keep maintained and in good repair,” Ciresi said.
It was certainly at top of mind earlier this month when Tropical Storm Isaias dumped six inches of rain into Manatawny Creek and, for the second time in 13 months, filled the basements of homes in the first block of Walnut Street.
"This is why funding for these projects was a major priority of mine, so that we address these structural issues now, not later when they could put people and the environment at risk," Ciresi said.
"I will keep pushing to invest in repairing and modernizing our infrastructure and make sure that our communities have a strong foundation to build on."

The funding comes on top of $281,884 provided last September by Harrisburg through the Flood Mitigation program of the Department of Community and Economic Development.
That funding came just two months after a July 11, 2019 deluge overwhelmed streams in the Mantawny Creek watershed and, not for the first time, filled basements and caused evacuations on Walnut Street.
It's not the first time there has been trouble there.
In 2003, a portion of the same arch collapsed in the middle of the street.
The cost to repair it was roughly $700,000 and took 10 months.
Since then, six other arches around the borough have collapsed.
Ironically, just days before the 2019 storm, state officials, including Ciresi and state Rep. Tim Hennessey, R-26th Dist., had visited Pottstown to push a proposal from Gov. Tom Wolf called RestorePA.
Pottstown was chosen because it is, sadly, the poster child for aging stormwater infrastructure.
That's not surprising when you consider that some of that infrastructures goes back to the Civil War era.
"I've been inside one of them and you start to see the effect of 150 years of wear and tear on these tunnels and you start to realize the magnitude of the problem," Hennessey said last year.
But Gov Wolf's RestorePA plan, which relied on a severance tax on the natural gas industry, fell flat in the Republican-controlled legislature. Borough officials have since pushed to identify existing funding streams that can be adapted to address this problem.
That's because it is a problem that is not going away. 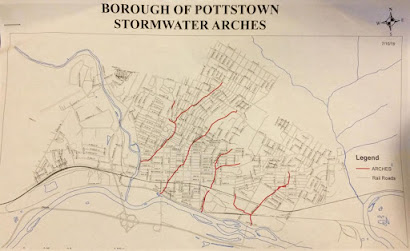 Pottstown Public Works has so far mapped 69 road crossings, and documented arches and tunnels under 225 privately owned parcels in Pottstown.
But that does not mean it can't affect other property owners and public property. In fact, it is sure to do so.
"Something like this could cost half-a-million dollars to fix. What kind of homeowner has that kind of money?" Ciresi said last year during a tour of Pottstown storm water infrastructure problems. "It's probably more than their house is worth."

The result, he said, can be "the homeowner just walks away and Pottstown gets another abandoned property. That's not something Pottstown needs," said Ciresi.
And collapses like that have a much broader impact on properties both upstream and downstream of the breach.
The mix of higher volumes of water unleashed by climate-change-fueled storm surges coming through a crumbling 150-year-old stone tunnel at a higher velocity is not a recipe for sustainability, according to Pottstown Public Works Director Doug Yerger.

"You would be amazed at the velocity this water moves through these tunnels," he said last year.

Standing next to a partially collapsed arch on the site of the old Frederick Brothers lumber mill at North Hanover and East streets one day before last year's storm, Yerger had a foreshadowing.

"There's a lot of debris in that sinkhole and if you get a storm surge, the water can back up behind it and surcharge the whole system," he warned.
One day later, same location showed the truth of his prediction: Rainwater had pushed the manhole cover in the street out of its fitting and water was rushing out, not in to the system.

"If it comes out, it will follow the contours of the land and there's no way of controlling it," Yerger warned.
Borough Manager Justin Keller welcome the infusion of funds and laid out the preliminary plan for making use of them.
"These funds along with the $275,000 we received through the flood mitigation grant will be split into three separate buckets:

1) to address reconstruction of recently collapsed arches on private property with the following priority in this order: 64 Walnut; 1200 High; and the former lumber yard property on Hanover Street. I cannot say for certain if full reconstruction will be able to be funded at the latter two properties and we will have to see where we are at with the funding remaining after the more detailed estimates come in for 64 Walnut. Of course, for the work to take place on private property, we will need permission and coordination on several fronts from those owners.
2) to conduct a study of the entire arch system and identify areas for priority repairs that will prevent further degradation.
3) restoration and maintenance priority repair areas identified in the study. These would likely be areas that are beginning to show signs of degradation such as missing mortar, and undermining of the foundation walls of the arch, etc.

"We currently have a meeting set up with our engineers in the coming weeks where we will hash out a strategy for how to approach this project," Keller wrote in an email to The Digital Notebook.
"It is not our intention to wait to fix the recent collapses until the results of the study come back. These are known priorities that can move forward independently of buckets No. 2 and No. 3," Keller wrote.
However, the study of the entire arch system will have to be completed before a priority list for restoration and repair can be pursued, he wrote.
"This funding is a great start to addressing the issues with the aging stormwater arches, but it is merely a fraction of what we will eventually need to address the entire system," Keller wrote.
"Two years ago a grant program didn’t even exist that would allow us to address storm infrastructure on private properties. Through persistent advocacy from the Borough and PAID we convened several meetings with our state reps and senator to make them aware that these issues are not unique to the borough and pressed hard for the creation of a more flexible state grant program."
And then, "we were pleasantly surprised that these efforts resulted in the amendment of an existing program which met our needs, and we were ecstatic when we were awarded the grant. The dedication and absolute determination of Senator Mensch, Representatives Ciresi and Hennessey was critical to identify this grant program and the resulting funding," Keller wrote.
"We couldn’t have done this without them collectively coming together to convince their peers of statewide need for this grant program, and for their drive to bring much needed funding benefitting the residents of Pottstown," wrote Keller.
Posted by Evan Brandt at 12:00 AM