With the exception of wannabe efforts in seemingly every backyard everywhere, major fireworks displays have been in short supply this Independence Day season.

One of the region's most beloved for the past 26 years, has been the free display put on by Waltz's Golf Farm.

That display, begun by the late Bill Waltz, does more than delight fans of bright lights and big booms.

It is also a major fundraiser for the Limerick Fire Department, which helps with the parking of cars — in exchange for a donation.

Thus, the pandemic-driven decision to skip this year's display not only disappointed fans of free fireworks, but denied the fire department of a major annual source of revenue.

"In March, things started to spiral and by May, it was pretty clear the fireworks were not going to happen," Waltz said during a phone interview from her home in California.

"We wanted everyone to stay safe," said Bobbie Waltz.

"And we wanted to turn something negative into something positive, to re-direct people," Waltz said. During a call with Gappa-Prange she learned her friend was making masks.

"I didn't think too much about it, but the next day I was standing in line at Home Depot and the guy behind me was wearing a mask with a fireworks pattern," said Waltz. "That was my ah-ha moment." 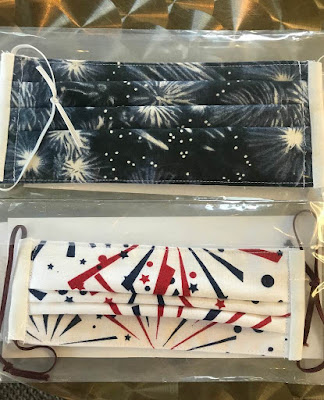 It was nearly June and Waltz called Gappa-Prange and said "if we get you fabric with fireworks pattern can you make masks with it?"

The answer might well have been "you just watch me," because by the time the fire company held its monthly meeting Monday, Gappa-Prange had made 852 of them in just a few weeks.

The masks were sold at the golf farm, across the street at Java's Brewin' and the Sunshine Cafe down the street, and even at the Waltz's other golf enterprise, Turtle Creek Golf Course.

"They just flew off the shelf," said Bobbie Waltz. "We would get 100 in and by the end of the day, they'd be gone. It was unbelievable."

"The Waltz family has always been good to us, but this was fabulous," Shuler said. After receiving a donation check with more than $6,000, Shuler said "that's almost twice as much as we make parking cars at the fireworks."

The firefighters also received a donation of 50 masks for their own use.

Gappa-Prange, a U.S. army veteran said she has been making masks for some time. "I have arthritis but I don't have much feeling in my hands, and I have fibromyalgia, so I am in constant pain, but it pushes me to make more, especially when I know I'm helping someone," she said.

"I didn't think I would be making so many masks," she said.

Knowing her tendency to help others, and to refuse payment, the Waltz family know exactly how to thank Gappa-Prange.

"They gave me $1,000 worth of Giant gift cards of varying denominations," Gappa-Prange said. "That's so cool. I'm so happy. Do you know how many people I can help with that?"
Posted by Evan Brandt at 7:58 PM