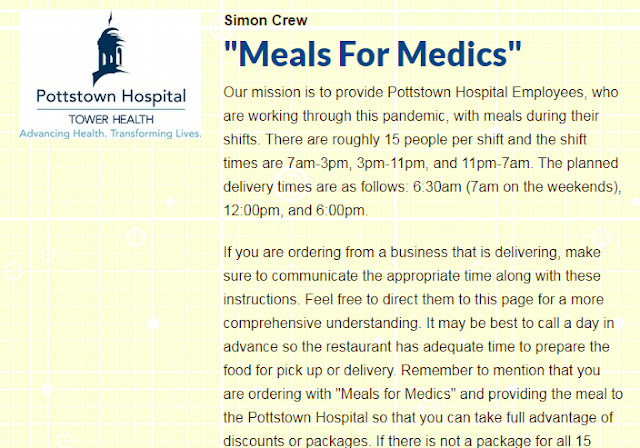 An Owen J. Roberts High School graduate has figured out a way we can support local restaurants AND support front-line medical workers at the same time.

His name is Simon Crew, and he is a 2018 graduate who is attending West Chester University Honors College where he is double majoring in marketing and economics; and double minoring in community and civic leadership.

And, not surprisingly, his idea checks off all those boxes.

His idea is a website called "Meals for Medics" and it pairs up people who want to help local businesses and hospital workers with participating restaurants.

The idea is pretty simple, which is what makes it so brilliant.

"Our mission is to provide Pottstown Hospital Employees, who are working through this pandemic, with meals during their shifts. There are roughly 15 people per shift," so you go to the website and sign up to provide a meal for one shift from one of the participating restaurants.

Crew contacted the restaurants to see if they would be interested in participating. He said his email is on the website in case other restaurants in the area want to hop on board.

The site has links to the restaurant websites, as well as what meal packages they offer and whether or not they can deliver.

"This way you can support local businesses and get meals to the hospital workers," Crew said.

When you sign-up to provide a meal for a shift, the site lists your name and what shift you've chosen,
so people have the option of picking the day, the shift and the restaurant.

The idea was spurred by his desire to help after his university closed and he came home to share his house with mother, father and three younger siblings.

"I was trying to think of a way to help and my mom suggested I buy a meal for someone on the staff at Pottstown Hospital. but my dad said one meal is not very effective and I should see if I could find a better way," said Crew.

"There are other sites called Meals for Medics, but this is the only one I know of that works this way," he said.

He said a classmate at West Chester liked his idea and has already reached out and is hoping to establish a similar site in the Erie area.

Crew also realized quickly that buying a meal for 15 people could cost from $100 to $130, so his site also has a GoFundMe link so that people can contribute what they can afford, and he pools the money to buy meals for shifts for which no one has signed up to provide meals.

"I know a lot of people are out of work now, and may not be able to cover the cost of a full meal for 15 people," said Crew. "This way, they can give what they can afford."

You can have the restaurant deliver the meals, or do it yourself, although if you want to add the personal touch, there is a protocol to follow that is detailed on the website.

Since March 7, the site has provided meals for 21 shifts at the hospital, which works out to 315 meals provided free to workers who are risking their lives battling the coronavirus pandemic.

Crew knows the hospital staff appreciates the effort because he was told so when he stopped by to drop off (what else?), some Girl Scout cookies.

"I spoke to the lady at the front desk and she told me she has been getting meals and distributing them in the hospital and she said it works very smoothly and people really like getting them, it's a big relief."

Crew said current plans call for providing the meals through May 5, "but I would extend it if more people sign up."