Who says you can't press forward with a new business in the midst of a worldwide pandemic?

During Wednesday night's council work session, the first of what promises to be many on-line virtual civic meetings, an update on a new business proposed for Keystone Boulevard was unveiled.

The proposal calls for the construction of a $142 million "green renewable diesel production plan" that creates diesel fuel from cellulose items like paper and cardboard.

It also produces a "co-product" called "bio-char" that is used in agriculture as a soil additive, according to Terry Planton, CEO of SEP-1, the development company looking to build the plant.

The project is the first to be considered under the KEEP plan for Keystone Boulevard, a joint plan
between the borough and West Pottsgrove Township has has been seven years in the making.

The plan seeks to attract light industrial, office and residential uses to the 255 acres along the Schuylkill River in both municipalities, and thus to help fund the extension of Keystone Boulvard to the Grosstown Road interchange with Route 422.

Borough Manager Jason Keller said this proposal, planned for 451 Keystone Blvd, which is where the road currently ends, is the first to come in under the umbrella of that plan.

The proposed plant would take in recycled cellulose like paper, cardboard, wood pallets and other non-food organic material and heat it to 2000 degrees, "but not burn it," according to Planton. 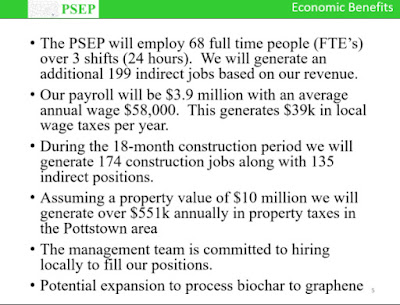 This process, called "thermal decomposition" that is undertaken in the absence of oxygen, would create a bio-diesel product and the bio-char product, which is much like fireplace ash and comprises fully 20 percent of the plant's revenue stream.

The bio-char will be transported in "closed containers" and will not be lose, Planton said.

It is a "closed loop," said Planton, noting there is no smell, little to no emissions and no noise louder than the freight trains that play the tracks through Pottstown day and night. Two similar plants are already in operation in Tennessee, he said.

If approved, the plant would employ 68 people full time, working in three shifts over 24 hours and have a $3.9 million payroll with an average wage of $58,000, according to Planton, who added that the company is "committed to hiring locally to fill our positions."

When up and running, the plant would generate $39,000 a year in wage taxes for Pottstown, along with about $551,000 in property taxes, according to Planton.

Construction, which would begin in June, 2021 according to the schedule, would take 18 months and employ 174 construction workers.

If the schedule holds, the plant would be up and running by January of 2023.

Keller praised the design and of the site, saying the office building up front, and evergreen screening all about will hide most of the site from the road.

"All operations take place inside," said Planton, although it will require 50 trucks a day to keep the plant running.

Because the project is occurring under the KEEP plan, the KEEP Oversight Committee, which has representatives from both the borough and West Pottsgrove, will act as the planning commission for the project, said Keller. 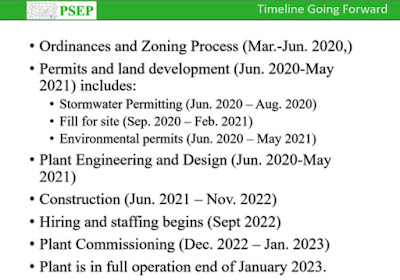 Borough staff is also recommending a change to the borough's zoning. The current zoning "did not anticipate such a use and this is cutting-edge technology," Matthew Hovey, the borough's assistant solicitor, said during the meeting.

Requiring the company to seek a variance from the zoning hearing board could present difficulties "because the legal standard to obtaining a variance, showing hardship, is high," Hovey said.

Better, he said, to create a new category for a "gasification facility."

Council agreed and will vote Monday on advertising a change to the zoning ordinance, which will allow for adoption at the June meeting.

The deal has also generated a "memorandum of understanding" between the borough and the developers, to clearly outline the responsibilities of each, Keller explained.

Planton praised the borough for its cooperation. "They haven't missed a beat and we are still on
schedule. In these times, we find that astounding," Planton said of the difficulties of conducting business planning during a worldwide pandemic.

"Our finance team in New York is ecstatic that we are still on schedule," he added.

"I can't wait to see what it looks like when they get it up and running," said Councilman Don Lebedynsky.

"I am very much in favor of this," said Councilman Ryan Procsal, who is in the KEEP Oversight Committee. "I think it's a great way to develop our last frontier along the riverfront."
Posted by Evan Brandt at 12:00 AM