Finding Hope for Pottstown in the Pages of the Paper 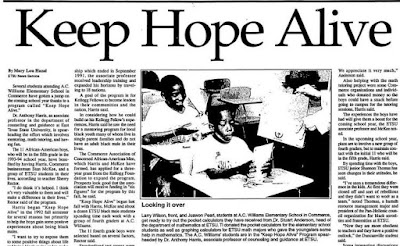 So I don't want to jinx it, but I am starting to have a spark of hope about Pottstown.

As a resident and taxpayer of more than 20 years, it is not something I say lightly.

My wife Karen and I bought a house way back when the Schuylkill Valley Metro still seemed like a viable possibility.

I grew up in New York's Hudson Valley, just north of New York City, where three separate Metro-North commuter train lines ferry untold millions of commuters in and out of Manhattan ever day.

As the editor of two weekly papers (and too many other non-newspapery publications to name here), I was familiar with many of the towns that had train stations along the Hudson, Harlem and New Haven lines.

I have often told people in Pennsylvania, having a train station did not guarantee a vibrant downtown in those of Westchester and Putnam counties, but few of the vibrant many downtowns that existed lacked a train station.

When we first visited Pottstown in 1997, Karen and I were fooled by the very active looking train station at Security Plaza, and disappointed when we discovered looks were deceiving.

But we bought a house anyway, thinking the train was coming and it would be a good investment, with the town likely to get back on its feet again in a few years.

We've been waiting every since, vacillating between not being willing to be fly-by-nighters and give up; and feeling throw-up-your-hands exasperation at how often this town shoots itself in the foot when it seems to be on the cusp of great things.

With a tip of the hat to the ever-enthusiastic John Armato, I will employ a sports analogy here, one borrowed from him in fact, that you go onto the field with the team you have.

I suppose the same can be said for revitalization.

Read about a town making a comeback in a big city daily or a national magazine, and it always seems like the town's leaders came to a realization, had a vision and pursued it with gumption and unity.

The Mayor Likes to talk about all the things to do in town:

But the reality of covering life in Pottstown day-to-day is knowing how often the comeback seems to be one-step forward, two-steps back.

In fact people have accused me of holding back on stories, rightly so, that could mean revitalization because I feel The Mercury to be guilty of raising false hope too many times.

And of course, the local newspaper plays a role in those perceptions, caught between the duty to report the bad stuff, particularly failures of leadership, and the desire to help lift up the town we cover and live in.

I have a good example of that inherent conflict.

Nine years ago, at about this time of year, a harmonic convergence of a sort occurred and a joint event that celebrated nothing more than the community brought the borough, the school district and countless other organizations together. It was called "Open Doors."

We promoted it of course, and it was a great success. Thousands filled downtown streets, and then had a blast at an afternoon festival at the high school campus.

The problem was, the Pottstown Police had chosen that morning to conduct a giant warrant sweep, and had picked up more than a dozen folks wanted on outstanding warrants. Our dogged police reporter Brandie Kessler had rode along with a photographer and we had all the elements for a front page that would empty the honor boxes.

Had things gone their usual course, that day's front page would have featured fugitives in handcuffs, being led into police cars, an image I find to be very ho hum but which demonstrably sells lots and lots of newspapers.

But I didn't want us to do what we always did. I argued with then-editor Nancy March that we would do the community a giant disservice if the story we told the day after a wildly successful demonstration of community cooperation was pictures of wanted criminals on the front page.

We publish warrant sweeps all the time. And yes, they are news, but on this day, they should not be the top news, I said.

To her credit, she agreed immediately, somewhat to the amazement of the spot news team I might add.

The Open Doors festival faded away in subsequent years, and we still publish warrant sweeps although, with The Mercury's depleted resources, far fewer than we used to. 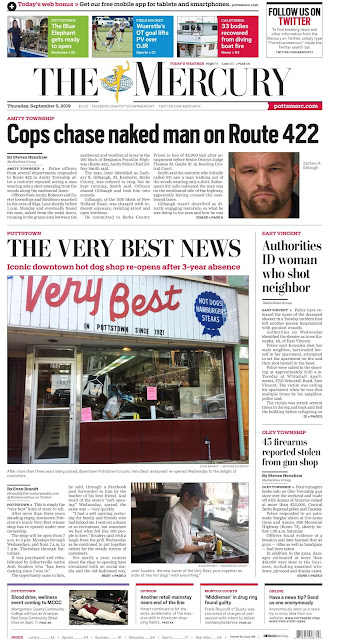 We only made a difference that day, but it mattered. I tell this story not to pump up my own tires, as my friend Hugh likes to say, but to help people understand that despite what it may seem like on the front page, we care deeply about what happens in Pottstown.

I say all of this to return to my point about hope for the future.

I found it in, of all places, the pages of The Mercury, Thursday's edition to be exact.

That was the edition which featured the re-opening of The Very Best Weiner Shop.

A friend of mine who works at The New York Times sent me an email questioning why this was front page news and I laughed and wrote back and said "you have to know Pottstown."

Which we do. It stood for a week as the second most popular story on our web site. 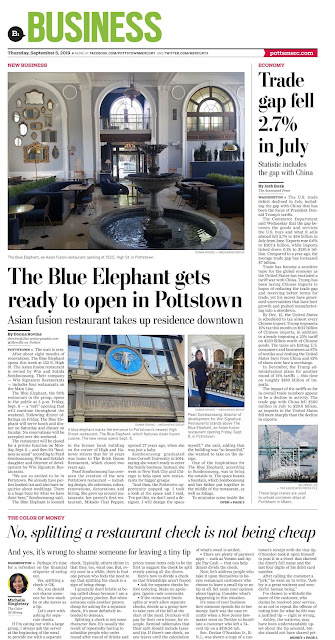 The most popular story was published the same day and was not even on the front page. It was about the long-awaited opening of The Blue Elephant in the High Street in space formerly occupied by the popular Brickhouse restaurant.

One might not think that an Asian-fusion restaurant would play well in a traditionally blue-collar town like Pottstown but from what I heard, it was a three-hour wait for a table on Friday's big opening night.

I heard that while sitting on a picnic table in The Alley on High Street, a rather ingenious invention by the owners of Kiki Vodka (more on that in a minute) that took the vacant lot once occupied long ago by The Hippodrome Theater and turned it into a kind of urban picnic grove.

Evidently, we now calls these things "a pop-up beer garden."

Featured in The Mercury in July, it has a mobile home parked there from which taps spout a variety and ever-changing mix of local beers, as well as Kiki's vodka infusions. Across the way is a shack which sells even more types of beer in cans.

In the parking lot out back was a food truck from Philly (they rotate as well) along with a truck selling, of all things, award-winning cupcakes.

Although curious for months, we were finally lured there to hear a band featuring saxophonist Marley Bryan, one of my son's classmates in the Pottstown High School Jazz Band.

It was great fun and we saw lots of people we know and had a grand old time.

Many arrived saying that had begun their evening at The Blue Elephant. 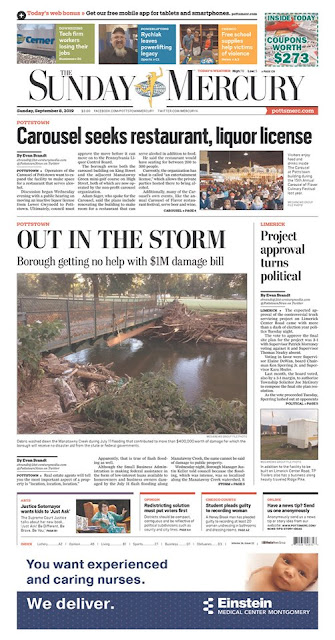 On the same evening, more visitors arrived after being at a Pottstown High School football game, taking place once again on a Friday night, thanks to a community effort to raise the money to return lights to Grigg Memorial Field.

To make it even better, it was Senior Night and the Trojans won their second of three games this season. (Beating Pottsgrove's current record, but again, I don't want to jinx anything so just pretend I didn't write that ...)

Also on the same night, people were packed into the Carousel at Pottstown's First Friday event, which featured a sidewalk chalk event, cornhole tournament and, (dare I say it?) beer and wine.

Sunday's front page contained the news that the folks over at the Carousel, who have taken over management of the adjacent mini-golf course, made upgrades there and plan more, are looking to make changes to allow a restaurant on site, complete with, yes, alcohol.

Down the street, the long-vacant Pottstown Diner at the borough's western gateway, has been remodeled and is now re-opened for business.

Across the street from The Alley on High Street is not only the Pottstown United Brewing, but the Splitting Edge Ax Throwing facility beneath which another micro-brewery will soon be opening. 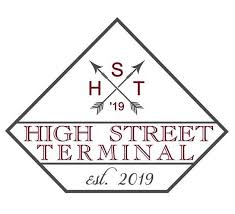 More than one person I've spoken with over the years has said "as goes High Street, so goes Pottstown." Let's hope so.

Speaking of High Street, on the same day we informed those who didn't already know about The Very Best and The Blue Elephant, columnist Tom Hylton gave us a look at Pottstown's newest (first?) Bed and; Breakfast, The Three Daughters Inn on High Street.

(That day's paper even featured a letter to the editor declaring Pottstown "Lucky to have Tom Hylton in the neighborhood." Will wonders never cease?)

It is run by Tracey and Jay Purdy who moved to Pottstown from Limerck because they believe in the town's potential.

I am friends with Tracy on Facebook and if her post the other day that for the first time since they
opened, they did not have all their rooms filled is any indication, their belief (and sizable financial investment) was well-placed.

Speaking of Facebook, a platform I use like a rented mule but nevertheless often disparage for the comment abuse it hosts, I have noticed positive activity there as well.

And lately, I have become more aware (maybe it was always there and I've been blinded by being busy, or cynicism, or both) of the multitude of events, groups activities available in town, all of which help add to that mysterious-but-necessary element to success -- quality of life.

I have been madly sharing them on the Positives in Pottstown page, sometimes at very strange hours I'll admit, and encourage anyone running a program to tag me so I can share more.

This positive progress will need to be repeated with it comes to The Ricketts Center. The characterless departure of the Olivett Boys and Girls Club creates both peril and opportunity for the center, which has struggled for decades to find its financial footing and fulfill its promise to the community.

The view from the outside seems to indicate the potential for partnerships to finally coalesce around the center's mission. Let us hope so.

Because for this positive momentum to have true meaning, it has to touch all of Pottstown's diverse facets.

Let's hope we do not fall victim to the frequent Facebook trope of saying "before they do that they need to fix/deal with .... fill in the complaint here."

Progress, like life, does not always move forward on a linear path, and in fits, starts and set-backs. It comes from unexpected directions, sometimes at the worst of times, and it almost always comes cloaked in challenge, which is a commodity Pottstown has in abundance.

We just have to look for those signs of hope.