As is so often the case, Monday's Spring-Ford School Board meeting was geared toward celebrating the district's successes, and pending successes.

In addition to recognizing this year's National Merit Scholar finalists, as seen above, the board also learned about the district's "Ram Buddies" program at the 8th Grade Center, through which Spring-Ford students volunteer in classrooms with students who have developmental disabilities.

Many of the students talked about the benefits to both sides of the relationship and one regular education student it had made her realize what profession she wants to pursue.

The board, and a rather sizable audience, were also treated to a preview of the high school musical, "Once on This Island," which will be staged at the school on March 1 and March 2.

Here is video of their performance: 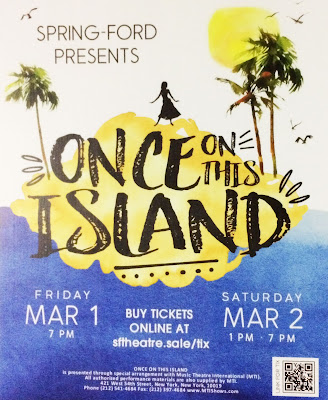 Alexander Cifelli, the teacher in charge of the theatrical production for the past few years, said more than 90 students are involved in the show, between cast and crew.

He likened the show to "Romeo and Juliet meets The Little Mermaid."

The board's student representatives, Nandini Patel and Julianna Lelli updated the board on a recent visit by students from Ireland.

They also broached the idea of initiating a new program of "student ambassadors," with one or two students from each grade representing the district on special occasions.

They also proposed that the district purchase blazers with the Spring-Ford emblem for the
ambassadors to wear on official occasions.

School Board President Tom DiBello was so impressed with the idea that he said if money cannot be found in the budget for the purchase that he would pay for them himself.

Board member Clinton Jackson offered to split the cost with DeBello if necessary.

When it came time for his report, Superintendent David Goodin "went to the video tape" (If any of you out there are old enough to remember that phrase...)


The board also spent some time discussing the varagies of the state budget and state funding.

Board member Edward Dressler said while Gov. Tom Wolf's budget calls for an additional $72 million to help pay for special education costs, those costs have risen by $1.54 billion.

He also said a new statewide report shows that Pennsylvania ranks ninth in the nation for the amount of money money it spends per student on public education -- $15,418.

More worrying is the fact that only five states in the nation spend less on public education than Pennsylvania, and that the average districts receives just 56 percent of its funding from the state and the rest comes largely from local property taxes.

DiBello said in Spring-Ford, local taxes pay for roughly 80 percent of the district's $170 million budget. About $30 million of that budget is due to special education costs, for which the state provides only $2.5 million.

As it so happened, state Rep. Joe Ciresi, D-146th Dist., was in the audience.

A former president of the Spring-ford School Board, Ciresi said he is supporting two bills that might help the district's finances.

One he described as "an aggressive reform bill on cyber charter schools;" and the other would release school board from adopting annual budgets before knowing how much they will be receiving from the state.

"You wouldn't have to do quite so much crystal ball gazing," he said explaining the bill would require school boards to adopt school budgets 30 days after the state budget is adopted.

The board wrapped up its meeting by hearing from two mothers who are advocating for a later start time for the older grades, citing recent pediatric studies that indicate teens are are being physically and psychologically harmed by being woken up too early.

Kate Doyle and Stacey Fonash told the board there is good reason to address the question considering the new science.

"When we know better, we should do better," Doyle said..

Just last month, after nearly a year of study and discussion, Phoenixville School District moved its start time 35 to 45 minutes and after months of being addressed on the issue, the Owen J. Roberts School District is now exploring the idea.

The OJR board's next meeting on the subject is scheduled for March 14, also at 7 p.m. in the high school LGI room.


And with that, here are the Tweets from the meeting:

No Teen is An Island
Posted by Evan Brandt at 12:00 AM

Email ThisBlogThis!Share to TwitterShare to FacebookShare to Pinterest
Labels: "Once on This Island", Spring-Ford School Board
Location: 350 S Lewis Rd, Royersford, PA 19468, USA