Currently Pottstown's earlier grades attend one of four elementary schools -- Rupert, Lincoln, Barth and Franklin -- that were renovated over three years. Edgwood was closed as a public school in 2014 and is currently occupied by two education tenants.

Rodriquez said the basement has leaking problems, some of which is near some of the primary electrical equipment, next to which a wet sandbag used to stop and absorb water could be seen.

Edgewood is also home to two modular classrooms that are currently not being used.

Jampo said renovating them to make them useful would cost more than they are worth. In fact, they are so old that the district could not even sell them for revenue, she said.

The good news, as far as the modular classrooms go, is that they are not needed if the fifth grades moves into the building.

There is enough space to accommodate all 250 children, if that is the direction the school board chooses.

Which is just as well given that Rodriguez confirmed there does seem to be a pest problem beneath the modulars. He was not specific, other to indicate they are "creepy crawlies."

Getting Edgewood to the point where it can be a public school building again will not come cheap, Jampo and Rodriguez warned. 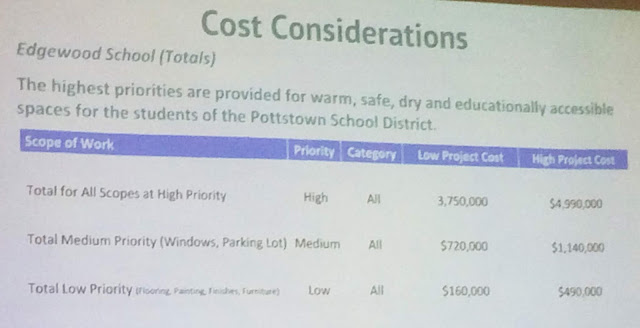 Depending on how much the district decides to do, the price tag could rise as high as $6.5 million.

During Thursday night's school board meeting, Hylton, who originally introduced the idea of moving the fifth grade into the middle school, warned against rushing into a decision.

In addition to the potential $6 million cost, Hylton said staffing and running Edgewood as a Fifth grade center could add $600,000 a year to the budget.

Jampo said Saturday that in addition to the cost of running the school, with teachers, lunch staff and a custodian, borrowing $6 million would require another $250,000 a year in debt service in the budget.

Part of the problem, Hylton said, is that the district has made some bad decisions regarding the size of its
buildings, noting that the middle school was "overbuilt. It's a Taj Mahal." He also said the high school held more than 1,300 students when population peaked in 1979.
About 20 years later, the high school was expanded, but it now has about 800 students, he said.

"I'm leery of making another costly decision," he said, noting that the Johnstown School district, which has a similar poverty level as Pottstown, has grades five through seven in its middle school and houses its eighth grade in its high school.

He also said that having teachers follow students through the grades at the middle school, at least in the lower grades, could be a less costly way to deal with the discipline problems there which have so far resisted the addition of administrators, mental health counselors and part of the time of the school resource (police) officer.

Both Francis and Board Vice President Katina Bearden said they like Hylton's idea about "looping" teachers. 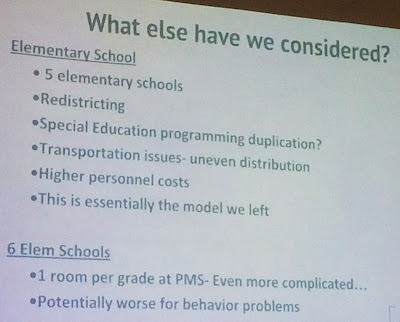 "The question is as a community and a school district, how do we deal with (the issues at the middle school) in the most effective, responsive way at the lowest cost?" Rodriguez said Saturday.

He said several options have been considered.


Each of those choices comes with its own set of changes and costs, Rodriguez said.


Cost was a concern raised by both Weands Saturday morning.

"I meet with people all the time who are considering investing in Pottstown and one of the points of resistance is always our high taxes," said Dane Weand, who pointed out that although many people blame "borough hall" for Pottstown's high tax rate, 70 percent of that bill is due to school taxes.

"Opening another building comes with high expenses and will reduce revenues from the rentals. I have no idea how the district can do that without increasing taxes," he said.

He said the discipline problems at the middle school pre-date the fifth grade being moved there.

His wife Polly, who taught elementary school for 35 years and served on the school board for eight years, agreed. "We think by moving one grade things are going to change? Why would you think moving the fifth grade will cure the behavior problems at the middle school?" she said. "To me, this whole thing is just shadowing our real problems."

She said closing Edgewood saved the district money and allowed the budget to be balanced without raising taxes.

But considerations other than money need to be taken into account, said Elisa Rose, a parent in the district and wife of school board member Raymond Rose.

"The kids are coming from all different elementary schools and they are all coming together in the middle school. Maturity wise, and what they are ready for, is different from fifth to sixth grade," she said.

Parent Rachel Zuniga agreed. "I am very satisfied with Lincoln Elementary School. it is a safe, wonderful, caring environment, but all I hear about the middle school is turmoil. I want to be able to keep my children in schools and maybe this would preserve their innocence a little bit longer," she said.

Bishop Everett Debnam, pastor at Invictus Ministries, said "we will have taxes until we die. Investing in children is more important than taxes."

He said the community has experienced "an inflation of frustration" about problems at the middle school. "What will make this better?" he asked.

Similar questions about effectiveness and how success will be measured were raised by Jamar Folly and Brian Swiderski.

Rodriguez responded frankly, "there are no guarantees."

"I don't want to leave Pottstown," said parent Laura Johnson. "And I think this might be really good for the fifth graders and its a good investment if the maintenance on this building needs to be done away.

She added that the financial considerations which are acting as constraints in this matter are due more to problems with how Harrisburg funds public education than with local decisions.

"The big problem with income is the state is not giving us what they say is our fair allotment," she said in reference to the Fair Funding Formula that is only partially applied when distributing state education funds.

"I think perhaps we should be channeling some of that tax frustration energy we're all feeling at the state," Johnson said.

Swiderski said before deciding, the school board should look at the cost of simply adding more support staff at the middle school to deal with discipline problems and compare that to doing the maximum upgrade at Edgewood.

He said moving the fifth grade to Edgewood may give the district "the most bang for its buck" in terms of getting them better prepared for higher grades.

But he warned that the school board, and the community, must know all the relevant facts before deciding and that "metrics" will be needed to measure success.

"We have to start tracking stuff and not just saying 'I feel this' or 'I feel that," Swiderski said.

As for Mikey David Briggs, he feels a little apprehensive about going to the middle school and does not want to lose track of the friends at Franklin Elementary School.

He just wants peace. Have a listen: