For the 11th consecutive year, people flush with the holiday spirit plunged into the not-so-chilly waters of the Schuylkill River Tuesday morning to mark the start of another year.

Fueled by coffee, hot dogs and sauerkraut -- and dressed in everything from matching pajamas, to tutus to full scuba body suits -- they took leave of the shoreline, and some might say their sanity, for a quick dip in the fast-moving current.

Swimmers waded into a small roped-off area of the river, due to the high water levels and rapid current, under the watchful eye of the dive rescue team there to safeguard the swimmers.

Among those in full rescue gear was West Pottsgrove Township Manager Craig Lloyd who, it turns out, is a fully certified scuba instructor and has been running with the dive team as a volunteer for a full seven years.

In fact, he volunteers with two dive teams, Lloyd said.

So yes, he knows his New Year's Day will be "cold and wet" every year, "so I take it easy on New Year's Eve," he joked.

Council Vice president Carol Kulp was there too, but stayed dry on the shoreline.

Rose took the plunge with about as many inches of skin covered as is humanly possible, while his fellow board member, John Armato, again the declined the ritual of an actual dunking.

No doubt, should Armato ever decide to take the plunge, he would insist on swimming to the North Coventry shore on the other side.

But given how high and swift the Schuylkill was Tuesday morning, he might not have made the opposite shore until he reached Phoenixille, so perhaps its best he remained a landlubber this year.

In the true appreciation of the absurd nature of Pottstown's river ritual, Henrick and Lebedynsky donned ballet tutus. 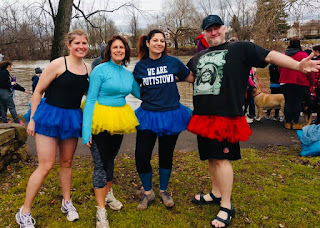 Hey I'm not kidding. I'm a professional journalist. I wouldn't just make something up .....


My personal favorite this year was the family who took the latest trend of wearing matching pajamas to a whole new level (shown here at left.)

For reasons that escape explanation, the Pottstown Parks and Recreation Personnel -- who deserve our thanks for staging and turning out for this event every year without fail -- settled upon an AC/DC sound track through the loudspeakers prior to the 10:30 dunking, giving the lead up to the affair a distinctive feel that I will decline to describe, other than to say it may not have been welcomes by those of us who were a little hungover.

After a well-delivered rendition of the national anthem, which was accompanied by an unsought partnership with several howling dogs in the crowd, the few, the brave and the unbalanced, left dry land for the Schuylkill's 45-degree embrace.

Parks and Recreation Director Michael Lenhart estimated about 75 went into the water.

Far more kept a good grip on their common sense and watched them do it.

Afterward, the moistened revelers scuttled to the other side of the park where a bonfire warmed and dried them much more quickly and thoroughly than one might have thought possible. 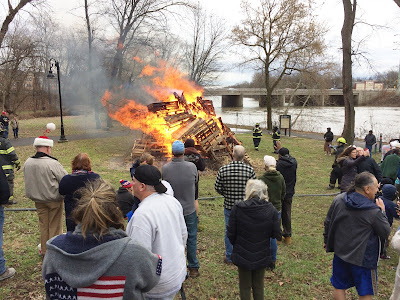 The heat from the fire was intense and, after several people tossed their hopelessly muddied swim shoes into the blaze, the smell was of more than just burning pallets.

As always, the Phillies Fire Company was on hand, firehoses in hand, to tame the blaze and to ensure it did not get out of hand.

And so we lumber into another year, the turn of the century fading in the rear-view mirror.