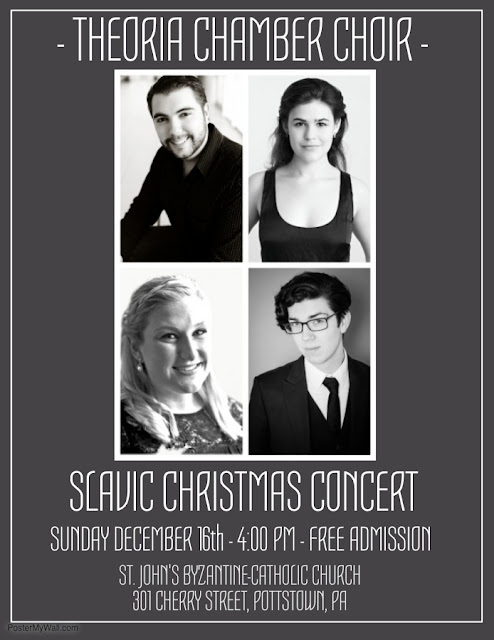 Blogger's Note: The following was provided by Theoria.

Theoria, a quartet of four professional vocalists, will return to Pottstown to perform an a cappella concert of Slavic and other Eastern European Christmas music and Western carols on Sunday, Dec. 16 at 4 p.m. at St. John the Baptist Byzantine Catholic Church, 301 Cherry Street, Pottstown.

This concert is free and open to the public.

Theoria was founded by Andrew Skitko, of Pottstown, who also directs the ensemble. Skitko regularly performs with the Opera Philadelphia chorus, as well as the Philadelphia Symphonic Choir and The Same Stream Choir, which has recorded several albums of new choral music and recently performed in New York.

He recently received a grant from The Eparchy of Passaic to expand the Theoria ensemble and perform as the choir-in-residence in New York City at St. Mary’s Byzantine Greek Catholic Church as part of a 2019 liturgical concert series.

Skitko is the paid cantor at the Assumption Byzantine Ruthenian Catholic Church in Trenton, where Theoria frequently performs, and he has served as a cantor at St. John’s church (Pottstown) and St. Michael’s Byzantine Church in Mont Clare.

Skitko also is a private voice teacher in the Pottstown area.

“We are very excited to return to Pottstown to share this unique music with my hometown community, support Pottstown’s growing arts presence, and again sing in the beautiful setting of St. John’s Byzantine Church,” Skitko said. “Past audiences, which have drawn from Reading, Philadelphia, and other surrounding areas, have been so warm and welcoming.

“This will be our second Christmas concert in Pottstown; the last concert here was in 2016,” he continued. “This space is perfect for a performance of this Slavic music, as St. John’s is known in this area for its distinctive ‘onion dome’ tower, stunning stained glass, and traditional iconography.

“We have been asked to return to Pottstown,” he added. “Previously, many of the audience members said they had never before heard traditional Slavic choral music and they were impressed by its beauty and hoped to hear more.”

The program will feature Carpatho-Rusyn, Ukrainian, and Russian works of composers such as Leontovych, Tchaikovsky, and Rimsky-Korsakov.

Delfing earned her bachelor’s degree in music education. An original member of Theoria, she is the music and theater arts teacher at First Philadelphia Preparatory Charter School and the associate director of Sister Cities Girlchoir.

Achtenberg holds degrees in Voice Performance and Comparative Literature. Last fall, Rebecca made her debut with Tri-Cities Opera. She has been a fellow with the CoOPERAtive program, and has been involved in many premieres of new works, including a production of Lewis Nielson's Opera NOVA with Cleveland's Real Time Opera.

Convenient, free parking is available in the lot behind the church, which can be accessed via South Street. Handicapped access to the church is available via the South Street entrance. A free will offering will be accepted to help defray the performers’ expenses.
Posted by Evan Brandt at 12:00 AM