Township commissioners unanimously adopted a $3 million 2019 budget Wednesday night at the last meeting of the year.

More than 43 percent of the budget is covered by drawing out of the reserve account the township has from years of collecting tipping fees at the Pottstown Landfill, which closed in 2007. 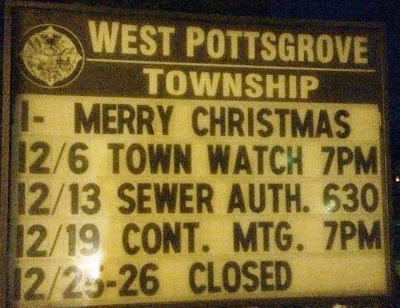 That was also the last year the township raised taxes.

Some projects budgeted for 2018 were pushed off to 2019, which is why less was needed from the reserve fund, Lloyd explained.

The primary project in that category is the replacement of the township's street lights with LED lights, a project that will cost West Pottsgrove about $45,000.

However, the change will save the township abut $15,000 a year, meaning it will break even in only three years, and enjoy the savings in the following years, he said.

Other budget related plans for 2019 include storm sewer work on School Lane, for which the township has a grant, and sanitary sewer work on Sylvan Drive, which will be undertaken by the township's sewer authority and for which a Community Development Block Grant will help to pay.

Other factors affecting the budget are a 3 percent contracted salary increase for the township's police officers. 2019 will be the third year of a three-year contract and negotiations on a new contract will begin around March, Lloyd said.


It was announced that Police Chief Matthew Stofflet has been invited to attend the FBI Academy in Quantico, Va.

After an executive session to discuss personnel, the township commissioners voted unanimously to put Corporal Brian Cass in charge of the department for the 10 weeks Stofflet will be at Quantico.

No Tax Hike, Chief Headed to FBI Academy
Posted by Evan Brandt at 12:00 AM