It may take a village to raise a child but it takes a community to paint a mural. 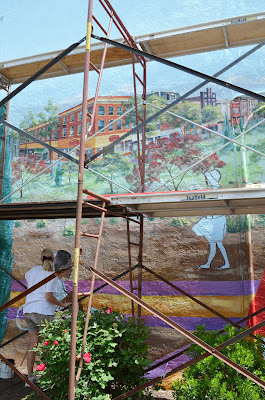 After two years of planning and approval by Pottstown Borough Council, the painting of a mural on the 427 Chestnut St. home of the Cilibertos got underway.

Ellen Nelson, arts department chairperson at The Hill School, has been working with CARES on the mural concept. During the inaugural CARES clean-up in the fall of 2013, she and several arts students surveyed area residents about what they’d like to see represented in a neighborhood mural.

Finding Kingsbury was “synchronicity,” Nelson says. “I didn’t know of one, or where to look.  Several weeks after starting to help plan the project, Carrie spontaneously sent an email to me out of the blue – and she lives right here in Pottstown.  Angels work in wondrous ways,” Nelson said.

While the concepts were being reviewed by MOSAIC and neighborhood residents, work also was taking place to obtain paint donations from the local Sherwin Williams store and provision of scaffolding and other supplies from The Hill School.

CARES also gratefully acknowledged the donation of labor from Reinhart Painting which has offered to do all of the wall preparation at the site.

Funds for the artist’s work, various permits, and supplies will come from a donation from MOSAIC as well as The Hill’s arts department and a generous contribution from The Hill School’s Pottstown community service-related 3758 Fund, established by Rodney D. Day III ’58 in honor of his father, Rodney D. Day, Jr. ’37.

In addition, MOSAIC and The Hill School sold magnets bearing a message of support for the community gardens and the mural; funds from that fall sale also are supporting the mural project.

June 13 is the target for the project to be finished.