Living and Dying By the Test

Pottstown High School's inclusion on the state's list of "under achieving" schools is certainly nothing to ignore, but it's also something that requires a little more understanding than simply acknowledging its presence on the list, Superintendent Reed Lindley explained to the school board Thursday night.

In other words, what does the school's presence on the list say about the school?

In measuring school performance in Pennsylvania, the line everyone wants to cross is called AYP.

This stands for Adequate Yearly Progress and it is the measure of success set up in the federal No Child Left Behind law enacted during the presidency of George W. Bush.

In Pennsylvania, scores on the PSSA test, or Pennsylvania System of School Assessment, are used to measure AYP, a definition of success which requires higher score each year in order to meet the goal.

In addition to the school's overall scores, sub-groups of low-income and minority students also must meet these goals in order for the school to be considered to be making AYP.

While Pottstown High School' math scores did not meet the bar on the PSSA test conducted in 2010, which is the basis for the school's inclusion on the list, it does not mean student scores are not improving, Lindley said.


Equally as important to whether the students are earning "advanced" or "proficient" ratings on the PSSA, Lindley said, is whether Pottstown student are making progress -- whether their scores are improving from one year to the next.

According to information he presented to the board Thursday -- they are.

He noted that despite falling short of the math mark, Pottstown's PSSA scores would have crossed the line into "achievement" territory with the difference of "just a few students' scores." 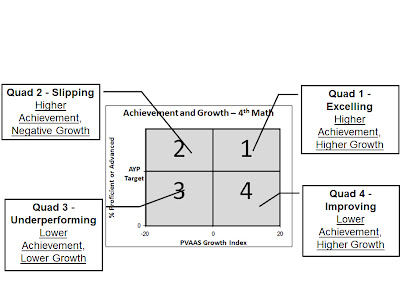 Lindley then presented a series of charts with each PSSA "data point" mapped in relation to the PSSA score which determines AYP, shown in this chart as the horizontal line, and the expected improvement from previous year's scores, represented by the vertical line.

The "expected improvement" is measured by the Pennsylvania Value-Added Assessment Score, or PVAAS.

As the chart shows, in the top left corner, it is possible to be a "high-achieving" school but still have your scores not improving, or even getting worse.

That is not the case in Pottstown, Lindley said.

In Pottstown, the scores show students making progress, or to the right of the "growth index" line, but falling short of the PSSA achievement bar, or the horizontal line.

In other words, Lindley said, while PSSA scores are certainly useful in helping to paint the assessment picture of how any district or school is doing, "they don't tell the whole story."

For example, part of the story not told by looking only at PSSA scores is the fact that Pottstown's career and technical students currently have a 100 percent graduation rate, Lindley said.

As The Mercury reported earlier this month, Lindley  also pointed out when compared to other career and technical students statewide, Pottstown's scores are between 15 percent and 20 percent higher than their peers statewide.

"The PSSA is not the only definition of quality," Lindley said.

"Yes, it's correct to say we did not score well on math in that year, but what it doesn't say is we have students who are scoring exceedingly well and going on to do great things," Lindley said.

"We know that it was our math scores that got us in trouble, and we were already moving aggressively to address that before" the high school was put on the list, Lindley said.


But despite those efforts, its possible Pottstown High School will be off the "under achieving" list next year, before those efforts get a chance to be tested in the PSSA arena.

"We already know we did better in the next year" on the PSSA tests Lindley told the school board.


The test itself, Lindley said, "was never designed to compare schools. I remember quite clearly when they announced the test, and they said it would never be used to compare schools, but instead to give teachers the information they needed to help students."

"And now, look where we are today, using it to compare schools," Lindley said.

Lindley said he is not arguing that educators should not be held accountable; quite the opposite. But Lindley said he would like that accountability to be based on an accurate assessment of educational success.

"And that is a fault of educators, that we have not come up with an assessment method that we can all agree is a fair measure of success," he said.

Franklin Elementary School teacher Lindi Vollmuth also reminded the board that several years ago, the district conducted a study of its PSSA scores and tracked students who had been part of the Pottstown School for their entire school career "and they did very well on these tests."

However, she said, because of Pottstown's high transient rate -- students who enter or leave the district in any given year -- "we are held accountable for gaps in their learning that may have occurred elsewhere," Vollmuth said.

Lindley noted that this year, students will take the state "Keystone Exams" in math and science. "It's an end of course exam, this year it's in biology, but it will be given to students who took biology last year. So the students who took biology last (school) year, will take the final this year. I don't know about you, but I think I would have forgotten some things" from the last day of school in June to taking the test in September.

"I can see why there is such a focus on being ready for exams," said board member Andrew Kefer. "I wish there was a better way to measure, but like Winston Churchill said about Democracy, it's the worse form except for all the other forms we've tried."