Exelon-fueled Grants to Improve Water Quality in the Manatawny 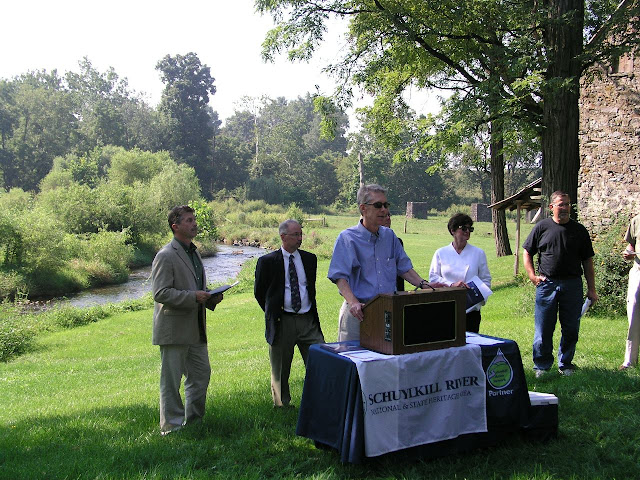 The grant announcement took place at the Russell Guntz Farm, in Oley, a Restoration Fund recipient for a recently completed agricultural remediation project.

Following the grant announcements, Guntz and Lloyd led a tour of the farm, highlighting the agricultural remediation projects.

Among the projects completed as a result of the grant were: construction of a manure storage tank, a new roof over the barnyard, rain gutters, stream bank fencing and a stoned animal walkway. All the projects help prevent manure and other pollutants from washing into the Manatawny Creek, which is a tributary of the Schuylkill River.

This is the seventh year the grant program has been available.

This year, money was distributed to five projects that will mitigate stormwater runoff and agricultural pollution. There are also four land transaction grants, totaling $4,000 each, to assist with costs associated with permanent protection of priority watershed parcels. (Please see 2012 Grant Awards list for recipients and project descriptions).

All the projects will benefit the entire watershed because they reduce the amount of pollution that enters creeks, and ultimately, the river, which is a source of drinking water for 1.5 million people.

“Over the past seven years, the Schuylkill River Restoration Fund has helped fund 30 projects, effectively reducing the amount of pollutants entering the river and its tributaries,” said Zwikl. “We are grateful to the unique partnerships that have formed to support this fund, which is helping us improve water quality throughout the watershed.”

This year, Exelon Generation contributed a total of $211,092 to the fund, while the Philadelphia Water Department (PWD) donated $100,000. Aqua PA, a first time contributor, provided $2,500. All funds not distributed for 2012 projects will be rolled over into the 2013 grant round.

The Land Transaction Assistance Grants program, introduced last year, provides for matching grants of up to $4,000 per project. It will pay for costs associated with property purchases and conservation easements, in order to facilitate preservation of high priority lands for water quality and habitat protection. A total of $16,000 in land protection transaction grants were distributed to assist with protection of four properties.

Exelon has provided $1.6 million to the Schuylkill River Restoration Fund since it was established in 2005. The annual fund began as part of a demonstration project for what is known as the water supply program at Exelon’s Limerick Generating Station. That program is under the purview of the Delaware River Basin Commission (DRBC).

For the past several years, the Schuylkill Action Network (SAN) has been working to grow the program by seeking additional funders. This is the third year the Philadelphia Water Department has contributed, and the first year Aqua PA has donated, so that more projects can be undertaken. SAN continues to seek additional contributors in an effort to further expand the fund.