North Hanover Street, Where Past and Future Meet

One of the first things they teach you in Journalism 101 (I refuse to use the "journo" abbreviation that Twitter has foisted upon us) is the "check the library."

In English, that means check the file of newspaper clips on any given subject to understand the context of whatever developing news you're about to write about.

For many years, this was a vital position in the newsroom and there was very little that escaped the attention of the sharp-eyed, ink-fingered person whose job was to preserve the day's news for future reference.

The rows and rows of specially  sized file cabinets once formed the very physical (as well as the philosophical) wall between editorial and advertising when both departments were on the third floor of our vintage building.

But it could be difficult for people coming in off the street to find old articles, particularly as they often wanted the whole page.

More often than not, we sent them to the Pottstown Regional Public Library where old copies of The Mercury could be accessed on micro-film.

Now, among the things they can do in our spiffy new Community Media Lab is to look at that micro-film right here at The Mercury.

In addition to the coffee and the micro-film, the lab will also be a place where, (Blatant Suck-Up Alert!) you can use "free Wi-Fi, Internet TV, coffee and cold drinks available, a lending library of books (with recommendations for reading from our editors and bloggers) and computers for public use."

At least that's how my boss, Nancy March, described it in her most recent post on her blog The Editor's Desk.

"The space can be used to blog, work on a resume, research. You can ask us for help starting a blog, you can schedule a meeting of your writers group, you can knit, you can read, or you can just stop in to say hi, pick up a map of the Schuylkill River Trail or post a help-wanted notice on the Community Share bulletin board," she wrote.

It will also feature, at least for now, a number of prints of front page photos published over the years in The Mercury.

It will include presidents, fires, features and famous people who have visited Pottstown -- some of whom, like Donald Trump, did not want to be photographed.

But our media lab will not be the only place where interesting Pottstown photographs can be found.

Across the street, at 17 N. Hanover St. the PDIDA office will also be opening their new welcome center.

While preparing for that event, Main Street Manager Sheila Dugan came across a stash of fascinating old photographs of Pottstown.

Some of them will be recognizable, others show what once was.

We have been running some of those photos on our Facebook and Pintrest pages recently and have been amazed and pleased at the response from so many of our readers who recognize, or try to recognize places that once made Pottstown special.

As I wrote just Friday, local history and the things that make a place special are one of the most important tools available to those who want to revitalize old towns like Pottstown.

But to revitalize takes more than shticks, tricks and clever slogans. It takes money.

And more than just grant money and investment money, it takes the kind of money you spend on your average Saturday at Lowe's or Wal-Mart or Giant.

So that's why it's important to remember that in addition to announcing the opening of  two GREAT new community resources, the grand openings, from 11 a.m. to 1 p.m., are also the kick-off to a summer sidewalk sale the next day. 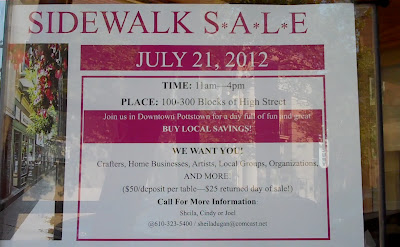 As I first wrote about in this June 3 post, it will be held Saturday, from  11 a.m. to 4 p.m., your local merchants will brave the heat to put their wares on display.

Come down and check it out...and bring your wallet.