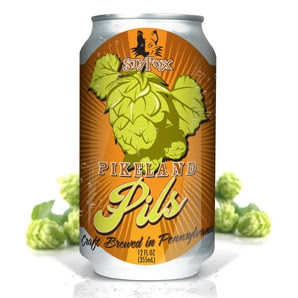 How often do your suspicions that you have good taste get confirmed?

I don't know about you, but for me, not too often.

That's just one reason why I was so jazzed to see the Facebook post from Pottstown's Sly Fox Brewery that its' "Pikeland Pils" pilsner was chosen by Men's Journal magazine as one of the 25 best beers in the world.

"A canned beer should be one that you want to string along beside the canoe and then crack open on a 95-degree day – which is why the aluminum-sheathed Sly Fox pilsner, a refreshing yet substantial straw-colored, artisanal-quality beer, gets our vote for the best damned can in the land."

"Best damned can in the land."

In beer parlance, that seems like a title that would be pretty hard to beat.

It got to more about this venerable brew when I volunteered to help pour beer at this year's Pottstown Volleyball Rumble, the first one with a beer tent.

(By the way, I have been meaning to blog about how impressed I remain with this event -- and no, not just because I was in a beer tent.

It is well-organized and everyone is friendly and efficient, at least everyone I met.

This is truly an International event bringing thousands of people to Pottstown.

I just wish I had seen at least one elected official there during my two days behind the beer table.

As usual at any meaningful event in Pottstown, I did see Borough Manager Jason Bobst, who will probably be glad to get a personal life back once he moves on to his new job.)

Anyway, back to the beer.

Under the tent I was joined manning the taps by the professionals from Limerick's esteemed Craft Ale House, and the amateurs -- myself and fellow reporter Brandie Kessler, Mercury editors Michelle Karas and Nancy March -- and her daughter the mighty Mandy March -- all of whom lent a hand and, in the process, tipped a few.

We even survived the rush of the two-for-one offerings.

Before I could start pouring, however, I had to undergo a rigorous training regimen on the seven Sly Fox offerings provided by Gary and Melissa Fry, co-owners of the Craft Ale House, you know, so as to better inform the customers.

It included a spot quiz and, of course, generous samplings to familiarize myself with the different tastes involved.

The offerings included the Royal Weisse, my second favorite, the Dunkel Lager, Rt. 113 IPA, Phoenix Pale Ale, Seamus' Irish Red Ale and the Oatmeal Stout , which I found I like despite the fact that being stout of build, I tend not to add to it overmuch by actually drinking stout.

Although the IPA was undoubedtly the most popular, and the only beer which required two kegs as it turned out, I found the pilsner most to my liking, especially given the heat of the day.

Of course, to be fair, I made sure each offering was given a fair chance.

(Luckily, since I live in a walkable town, and Memorial Park is a mere four blocks from my house, I was able to ensure that my sampling was as thorough as possible without causing risk to myself or others.)

Never one to be on top of new things, a peculiar handicap for a newsman, I was unaware that canned beers are experiencing a new standing among the lovers of hops and barley.

Apparently, as Corey Reid, beer ambassador for Sly Fox (world's greatest job title by the way), explained to me as I sipped the beer he had brought, can technology is not what it used to be.

No longer the imparter of a metallic taste, due largely to a high-tech liner, cans are now actually considered by many to be the preferred vessel for the amber liquid Ben Franklin once offered as proof positive that "God loves us."

Unlike bottles, they do not allow light to pierce and fade flavors, and they also do not have the little pocket of air one finds just beneath the bottle cap.

Begun in Phoenixville and served on tap at numerous fine eating establishments, Sly Fox came to Pottstown in February.

And, perhaps most importantly, their tasting room is now open.

So you can check it out and sample it for yourself, you don't have to take my word for it.
Posted by Evan Brandt at 4:00 AM