"All Politics is Local," Except When it Isn't

Although there is little chance anyone will begin drilling for natural gas in Upper Pottsgrove Township any time soon, the commissioners Monday nevertheless voted unanimously Monday to support a bill that would ensure they would have some say in the matter should it happen.

Their vote represents one voice among a growing municipal chorus opposing Act 13, enacted on Valentine's Day by the Pennsylvania General Assembly, that would, among other things, exempt any kind of gas or oil drilling operation in Pennsylvania from most kinds of local control.

The bill comes in the wake of the Marcellus shale gas drilling boom. Marcellus shale is a geological formation that has trapped millions of cubic feet of natural gas in tiny pockets in a sedimentary rock that was once mud that has been pressed and compacted into rock.

In the east, it stretches from West Virginia to Newfoundland, but by-passes much of southeastern Pennsylvania. In much of the rest of the commonwealth, however, it is ever- present and, now, it's big business.

The gas is extracted hydraulically, by pumping chemical-filled water at high pressure into the rock, fracturing it (or "fracking" it), and releasing the gas.

The concern with Act 13, the commissioners explained Monday, is not so much that they fear an influx of unregulated well-drillers, so much as the precedent of the Commonwealth taking control away from local government.

"This is similar to what the state tried to do with quarrying," Township Solicitor Charles D. Garner Jr. told the commissioners.

He was referring to Senate Bill 898, proposed by Sen. Robert Tomlinson, R-6th Dist., a politician who received generous contributions from various members of the Silvi family, who run the company that has been frustrated in its attempts to open a quarry in New Hanover.

As The Mercury reported last year, New Hanover Township Solicitor Paul Bauer said it pretty plainly when the supervisors there were passing a similar resolution in opposition to SB 898: "This bill being proposed by Sen. Tomlinson was only introduced on March 25, just several months after Sen. Tomlinson received large campaign contributions from both Lawrence and John Silvi, as well as Monique Silvi, owners of Gibraltar Rock Quarries," Bauer said.

Is the same thing at work with Act 13? 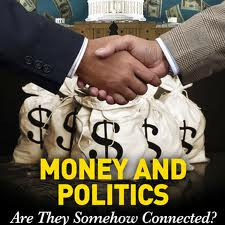 The National Institute on Money in State Politics informs us that:
Presumably, the fact that gas drilling companies were among the largest contributors to Gov. Tom Corbett's election campaign has no bearing on his signing a law that allows "big government" to grab authority away from local governments to benefit an industry that helped him get elected.

Like the proposed quarrying law, Act 13 "requires municipalities to allow oil and gas operations except for processing plants, in ALL zoning districts," according to the resolution unanimously adopted by the Upper Pottsgrove commissioners Monday.

"It's the precedent of pre-emption which could be troublesome," Garner said."If it's allowed here, it could set a precedent of allowing the state to extract authority bit by bit from townships and boroughs."

Act 13 "removes all meaningful zoning and planning authority from local governments as to the oil and gas industry, while all other entities, be they individual, corporate or institutional, still must abide by local ordinances," the resolution reads.

Eliminating local zoning restrictions would leave the township with "very little control" over a a natural gas operation that wanted to open up in Upper Pottsgrove, however unlikely, said Commissioners Chairman Elwood Taylor.

"We would rather control what goes on in our own towns and not give it all away to the state," he said.

"Act 13 violates both the Pennsylvania and U.S. Constitutions, creating a zoning scheme that supersedes the protections local officials have sworn to uphold; as well as the health, safety and welfare of its residents that local officials must protect," the resolution reads

Under a provision buried in the law, doctors in Pennsylvania can access information about chemicals used in natural gas extraction -- but they won't be able to share it with their patients.

The resolution passed by Upper Pottsgrove does not involve the township in a lawsuit brought by several towns and boroughs, some of Bucks County, and the Delaware Riverkeeper.

Arguments in that lawsuit will be made before the state's nine-member Commonwealth Court between June 4 and 8 in Harrisburg.