The Things We Leave Behind

These things always seem to come in threes.

First was the news that management at The Mercury had left behind personnel files of current and former employees, complete with Social Security numbers, birthdays, addresses and even bank account numbers, when it abandoned our landmark building in June of 2018.

This has of course left all of us vulnerable to identity thieves, but in many ways, those of us who are left and who identify themselves as journalists first and foremost, have been experiencing a slow identity theft for years as profits and resources have been siphoned away from The Mercury by the New York hedge fund that owns us, Alden Global Capital. 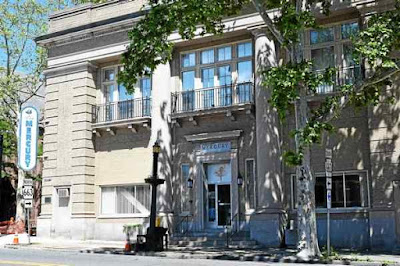 Among those resources was the landmark Mercury building which, like the other properties it obtained when it purchased the majority of shares in what was once known as Digital First Media, it has sold off for cash that was not put to any use for the newspaper itself, but rather to fund Alden's other business ventures.

The building was sold on Oct. 22 for $440,000 to a company controlled by April Barkasi, the woman who founded and is the CEO of Cedarville Engineering Group, LLC.

She also purchased the bank building across the street at the northwest corner of High and North Hanover streets.

By all reports, she intends to turn it into a "boutique hotel" with a whiskey bar and cigar lounge in the basement where the newspaper's "vault" of old papers used to be housed.

When the Alden shell company 24 North Hanover St. LLC bought the building in 2013, it paid nearly  $1.2 million, according to Montgomery County property records.

I'm pleased to see this grand old building will get a new life and contribute to the ongoing revitalization of downtown Pottstown. (And let's face it, I never met a whiskey bar I didn't like.)

But before that happens, there is quite a bit of cleaning up to do.

You see, it wasn't just a few missed boxes of personnel records that were left behind,, a truly symbolic indication of the disregard the company had for the building and those who worked there.

Those who have been in the building have marveled at the ghostly nature of how everything looks.

Desks with papers, chairs and staplers; used computers in a storeroom; someone even joked that there was a half-filled cup of coffee sitting on a desk.

It was as if everyone was coming back to work the next day.

But of course, that's not going to happen, not here and not at dozens of local newspapers across the country, where the crisis in local news is being accelerated by private equity firms, like the one that owns The Mercury and the other local papers in Southeast Pennsylvania.

Which brings us to the second of the three.

News that Warren Buffet, who had once seemed like one of the billionaires who might save some of the nation's local newspapers, gave up and sold his chain of papers.

As Julie Reynolds, the remarkable investigative reporter for The Newspaper Guild reported, Warren Buffett’s sold his BH Media newspapers to Lee Enterprises for $140 million. That deal is expected to close in mid-March.

Like a shark drawn to blood in the water, "Alden Global Capital, the New York vulture hedge fund gutting Digital First Media newspapers (and owner of The Mercury), has acquired a $9.2 million stake in Lee Enterprises, siphoning money from Alden’s highly profitable and understaffed papers to finance the stock purchase," Reynolds reported.

The purchase was made through one of Alden's shell companies, some of which, Reynolds has discovered, are incorporated in secrecy-friendly Delaware and the Cayman Islands. The methodology hasn't changed and neither will the outcome.

Alden CEO Heath Freeman, Reynold's reported, “intends to engage in discussions” with Lee’s management and/or board of directors about “certain operational and strategic matters, including, but not limited to the recently announced acquisition of Berkshire Hathaway’s newspaper operations and matters pertaining to (Lee’s) 2020 Annual Meeting.”

In other words, like it did when it bought stock in Gannett after it merged with Gateway; and when it purchased Michael Ferro's Tribune Publishing stock after he was forced out, it wants to feed on the corpse.

There is no thought to investing in these papers to make them sustainable and thus sustain the crucial work of local journalism, keeping the powerful accountable.

The only motive is greed, which is a sad but all-too-familiar mindset in these times.

Gone is any sense of corporate responsibility to the community its newspapers serve.

Which brings us to instance number three, which is likely my final visit to the inside of The Mercury building before renovations begin.

I accepted an invitation to join former Mercury Editor Nancy March to drop in Friday morning.

Like so many others, I went to the desk where I had worked for decades, and found a few things I should not have left behind.

But taking the seven drawers of files I had accumulated over the years was impractical. And frankly, I ceased to make much use of them even when I was still in 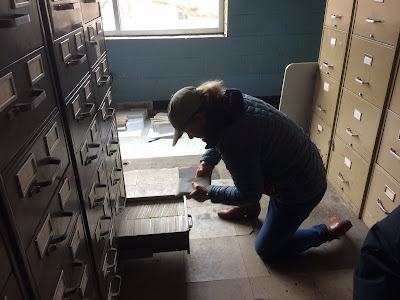 A greater loss is The Mercury clip files. Back when we had a staff, we had employees who would clip every story in every day's paper.

Whenever a reporter was assigned a story, the first step was to go to the clip file to get background on the subject.

At least the "bound volumes," physical copies of each edition of the paper found into annual books, have been moved to the company offices at the printing plant in Exton and are being preserved.

But that preservation is only a sliver of the region's history The Mercury has recorded.

As I walked through the newsrooms (we had two locations during my tenure there) and advertising rooms, the publisher's office, the composing room, I could not escape thinking about what is being lost; not only the history of the community, but the history of The Mercury's involvement in that community.

After the visit, I was covering a visit by Pennsylvania Department of Human Services Teresa Miller to Montgomery County Community College. It began in the North Hall which, I could not resist telling Miller, had once been the Kiwi Shoe Polish factory and was later known as the Nittany Warehouse.

That warehouse was storing dangerous chemicals, and doing it so badly, that former Fire Chief Rich Lengel had told me if it caught fire, he would not allow any firefighters inside because it was too dangerous.

Kevin Hoffman and I climbed up onto the railroad tracks and he took photos through the windows of chemicals leaking out of bins and unclosed containers and that lead to coverage that got the attention of the EPA, who shut the place down.

Now, it's a unique part of the community college and an asset instead of a liability.

Sure enough, as I looked through the piles of old Mercury editions strewn about the office, I found one of those front pages from 2000 when we helped to expose that danger and get it taken care of, making Pottstown a safer and more vibrant community.

This is the kind of value local journalism brings to a community, the kind that doesn't show up on a quarterly report, the kind Mr. Freeman does not seem to consider as being worth saving. 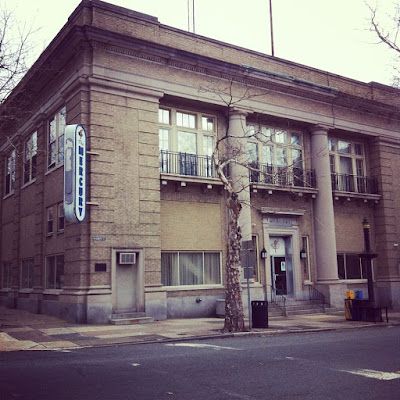 So as I left the building where I had worked for more than 20 years, and housed the people who chronicled the life of the greater Pottstown area for nearly 90 years, I reflected on the fact that its not just desks, clip files and memories that are being left behind.

Also being left behind is the value we place on community, nationally and locally; on having a common set of facts, a common starting point for discussions about what's best for the future, where we go from here.

That is the true loss, one that is only now just being recognized, perhaps too late.

I will be sure to toast its memory in the whiskey bar that replaces it.
Posted by Evan Brandt at 5:28 PM