Not everything the Pottstown Metropolitan Area Regional Planning Committee deals with is zoning and traffic and land use.

Sometimes the planning part deals with more global subjects, like climate change, and how we can plan locally combat it.

Last night was one of those nights.

The planners were visited by two volunteers -- Jim Wylie and Bill Sabey -- from the Sierra Club's "Ready for 100%" renewable energy initiative.

They were there to talk to the planners about encouraging their municipalities to take whatever steps they can be convinced to take to change their energy habits -- that goes for the municipalities themselves as well as the residents they represent.

If they do so, they would not be the first.

To date, the Chester County municipalities of Phoenixville, West Chester, Downingtown, Uwchlan, Kennett, and East Bradford have all adopted resolutions committing to 100 percent clean, renewable electricity by 2035, and 100 percent renewable energy for heat and transportation by 2050.

Jon Lesher, principal environmental planner for the Montgomery County Planning Commission, told the regional planners that the county's renewable energy efforts have focused primarily on solar and geothermal, where it is viable.

There has not been much focus on wind energy here simply because, the last several days excepted, eastern Pennsylvania is not an area known for sustained regular winds.

He said to date, Montgomery County has 1,865 solar projects. 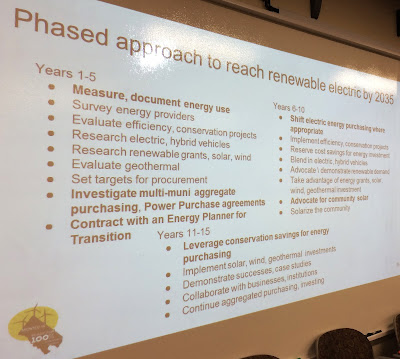 Pottstown Borough Council President Dan Weand noted that when the borough built its new $4 million public works garage, it was sure to put nodes on the roof to accept solar panels.

"But budget constraints made it too much to afford right away," he said.

Sabey said doing an energy audit on borough hall and other borough facilities could generate savings, "but don't put that in the general fund. Put it into a dedicated energy fund and when grants come along that need a 50 percent match, you'll be ready," he advised.

The next step, after adopting a resolution, can be to set up a team of officials, experts and volunteers -- West Chester calls theirs the "Green Team" -- to start mapping out how the sustainable energy goals can be achieved.

For example, neighborhoods can band together and get a discount from a solar panel installer if they all commit to getting panels. Philadelphia recently bid for purchasing solar power electricity and awarded it to a project in Adams County for a price of 4.4 cents per kilowatt, Wylie said. 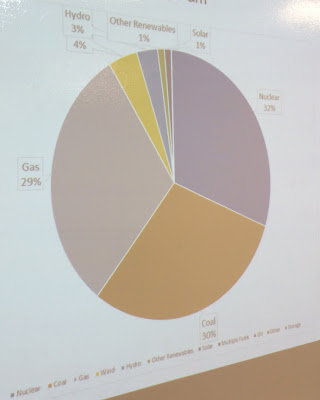 The Delaware Valley Regional Planning Commission estimates that the eight municipalities in the Pottstown planning region spend nearly $170 million per year on energy. "Imagine if even half of that could be from renewable sources," said Sabey.

About 91 percent of that energy comes from three sources, nuclear, coal and natural gas, with solar representing 1 percent and hydro-electric 3 percent.

The alternative, Sabey said, is to endure the ever-worsening impacts of climate change without taking any action to stem them.

We are already beginning to see the impacts, he said. 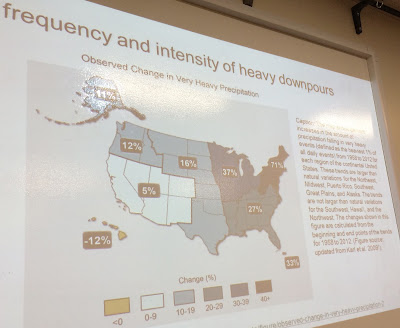 Such high temperatures also lead to things like highways buckling, as Route 422 and route 202 did last summer.

There is also a decided increase in heavy downpours in the region. No you are not imagining it.

He pointed to the fact that last year, for the first time in its 38-year history, the King of Prussia Mall was flooded by an intense rain storm.

Government records indicate that intense downpours above normal variations from 1958 to 2012 increased in the northeast states, including Pennsylvania, West Virginia and Maryland, by 71 percent.

The planners made no commitments to speak with their municipalities about moving forward with any of the suggestions made by Wylie and Sabey.

Feeling Energized
Posted by Evan Brandt at 12:00 AM