About six of the 60 miles of roads in Pottstown are set to be paved this season through a combination of borough work, and work by utilities.

Borough Manager Justin Keller outlined the plans during the Aug, 4 work session and said the decisions about which roads to pave are based on a system that rates roads from worst (5) to best (1).

As of last week, Pottstown had 11.5 miles of roadway rated at a 5, which is less than the 14 miles so rated two years ago. "So we're making a little bit of progress," Keller said.

State funds, provided through the gas tax, come to the borough and pay for road work through the "liquid fuels fund," which will take care of nearly four of those miles of road.

About a half-mile of roadway will be repaved as the result of water and sewer work tearing up the roads.

The road work being done on High Street, which is an effort by PECO to put electric utility lines in the street, is scheduled to be complete by the end of August and the road will be paved from Madison to Manatawny Street in September, Keller said.

That will include High Street from Keim Street east, through Lower Pottsgrove and into Limerick, where it becomes West Ridge Pike, all the way to Old Township Line road.

Other paving projects on the scheduled are Evans Street, from Beech Street to Apple street. as well as portions of Spruce, Chestnut, Shoemaker, Wilson, Henry and Cherry streets, Keller said.

Pottstown also has 19 miles of alleys, but in most cases, they are not dedicated to the borough and so paving them is legally troublesome.

The borough is working on the issue, albeit slowly.

Experiments have included using recycling pavement from when the road is scraped to make room for new pavement.

Another experiment, undertaken on a Willow Street alley between East and Airy streets, uses a kind of aggregate stone that seems to be holding up well. 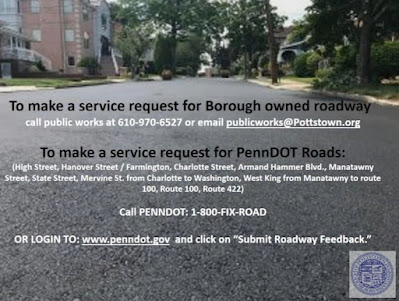 It was applied as part of a storm-water mitigation project and funded by a $230,000 grant that also involved other measures.

"So far, it seems to be holding up pretty well," said Keller, adding that the water it allows to percolate through is kept out of a nearby stream, thus helping the borough to meet federal government mandates to reduce stream pollution.

Pottstown is also blessed with a number of potholes, due in part to the age of its streets and because "we're in a part of Pennsylvania that is one of the worst for the freeze/thaw cycle," according to Keller.

Residents and drivers can report potholes on borough owned streets by calling 610-970-6527 or emailing publicworks@pottstown,.org.

As for state roads, like High Street and Charlotte Street and parts of King Street, call PennDOT at 1-800-FIX-ROAD or login to www.penndot.gov and click on "Submit Roadway Feedback" to report a pothole.