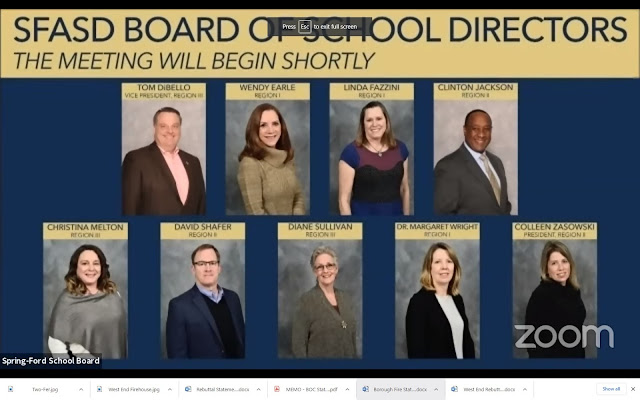 With little warning, and no mention on the agenda, the Spring-Ford School Board voted 8-1 Monday night to halt its search for a new superintendent and negotiate a contract with the man doing the job right now.The motion was made in the middle of the solicitor's report by school board member Tom DiBello, who said Acting Superintendent Robert Rizzo has done an outstanding job in difficult circumstances.

School Board President Colleen Zasowski immediately agreed and seconded the motion which, as it turns out, is required by law not to hire Rizzo, but to direct the solicitor to draw up a contract for a board vote.

Rizzo was hired in June, 2019 as the district's assistant superintendent.

After his boss, former Superintendent David Goodin, announced in December that he was resigning to take a job in North Carolina, the board moved Rizzo to the position of "Acting Superintendent" in February.

In the wake of Goodin's departure, the school board had engaged the Montgomery County Intermediate Unit to undertake a search for a new superintendent.

But Zasowski noted that board members had not been responsive to the IU's requests for information and said she saw no reason to waste the board's time, and the IU's time looking for a new superintendent when such a good candidate is right in front of them.

"I think Mr. Rizzo has had an on-the-job interview," she said. "Why are we continuing to go down that rabbit hole, and going through that, when we have someone that stepped up during a crisis?"

Similarly, DiBello had said that "when you are in a crisis, leaders step up and that's when they show you who they really are."

Board member Wendy Earle agreed. "What's the point of going through this process when you have what you're looking for right in front of you?" she said.

Rizzo "is an excellent fit for the school district," said board member Diane Sullivan. "The students known him and the staff knows him."

"Sure, you measure twice and cut once," said board member David Shafer, "but when you know, you know."

The only board member to vote no on the motion was Margaret Wright, who said it was not because she does not endorse Rizzo -- "I'm a fan," she said --  but rather believes the board should follow its original process."This is such a huge decision, I'm a little disappointed this was brought up in the middle of board meeting," said Wright. "I think we should have a process."
She also apologized to Rizzo and said "I believe this is a political stunt and you are a pawn in this," but she was quickly cut-off by DiBello and Zasowski who said "we're not going down that path."
Rizzo began his career as a band director in the East Allegheny School District in 1993. Since that time, he has served as a band director for Penn Hills School District and Indiana Area School District, as well as an assistant principal at Indiana Area Senior High School, principal at Ben Franklin Elementary School, coordinator of instructional technology for Indiana Area School District, and most recently, assistant superintendent of the Indiana Area School District.

Rizzo is currently pursuing his doctor of educational leadership/instructional technology through Wilkes University. He earned his superintendent’s letter of eligibility in 2015 from California University of Pennsylvania, his principal certification and master of education from Indiana University of Pennsylvania and is graduate of Penn State University.
The sudden selection of Rizzo won praise from the two members of the public who offered comment last night.
Michael Lebiedzinski told the board "the sound you hear outside is the thousands of people in the district applauding."
Dan Mayo congratulated the board for "everyone recognizing its the right thing to do."
District Solicitor Mark Fitzgerald said he would begin work on a contract with Rizzo for the board to consider, perhaps as soon as its next meeting.