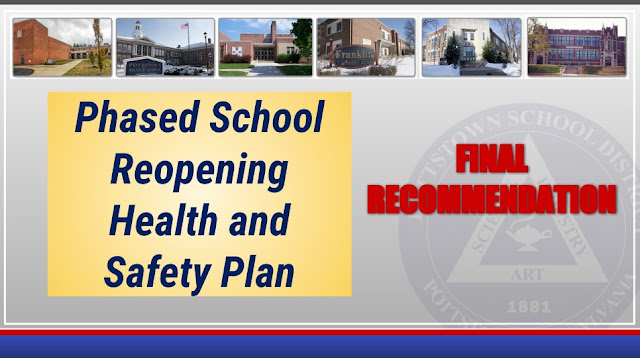 As COVID-19 cases rise and the Montgomery County Department of Health as closed all schools to close for two weeks, the Pottstown School Board began plotting a path toward partial re-opening.

It is not a well-marked plan given that the vote to potentially re-open some classes in January is contingent on a number of factors.

Adding to the uncertainty is the fact that after piloting two different hybrid models at Lincoln and Rupert elementary schools, Superintendent Stephen Rodriguez said he could not "in good conscience" recommend either one to the board for adoption. 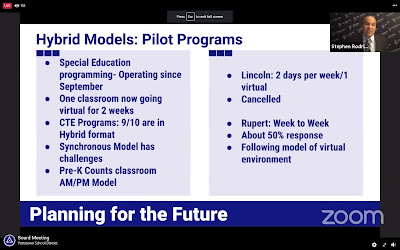 The Lincoln pilot was a hybrid program having elementary students come two days a week and "it did not go well," said Rodriguez. Parents told him "it's too hard to schedule." It has already been cancelled.

At Rupert, the district tested doing hybrid classes with some students in class and others online and "I did not like what I saw. The teacher is essentially doing two types of instruction. When we cut our teachers two different ways at elementary level, you cheat one group, then the other," he told the board.

"There are some serious issues with synchronous learning which I observed this week," Rodriguez told the school board.
Rodriguez concluded that "teachers I trust have highlighted real problems and I cannot ignore the evidence of my own eyes."
That meant that while recommended to the board that planning begin for a possible return to classes on Jan. 19, "I can't recommend to you what kind of hybrid program we would use and that's not where I wanted to be."
Some of the hybrid models work better for the secondary grades, he said. Rodriguez said the district is looking at the elementary AM/PM model being used in Perkiomen Valley Schools where the half the younger students attend class for half the day, and then the other half comes.
"The problem for us is Perkiomen Valley buses all their students and we may run into problems with Pick-ups. This is a working town," he said. 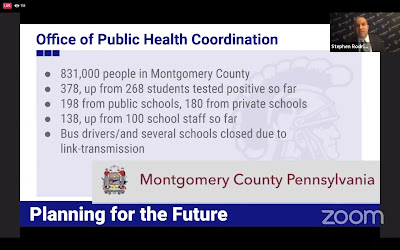 Also making planning difficult are the surging numbers of coronavirus cases. Rodriguez said Montgomery County has seen an increase of almost 1,000 COVID-19 cases in the last seven days. In Pottstown, the rate is 7.3 percent, up from 5.26 percent last week.
In the borough, the rate is 123 cases per 100,000 for the week that ended Nov. 12. In a borough of 20,000 people, that translates into 31 cases, up from 29 cases.
Rodriguez said recent COVID-19 cases in Montgomery County have risen to 378, up from 268.
Of those, 198 of those are in public schools.
Other factors come into play in this continuously shifting landscape and making a decision, said board member John Armato, is like trying to hit a home run off a 9--mile-per-hour curveball with a stick, wearing a blindfold. 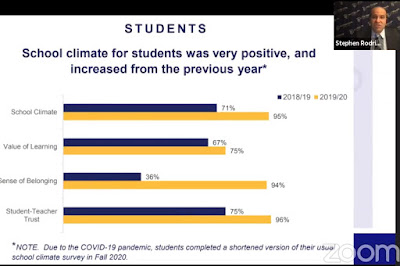 Many parents have cited the deterioration of their children's mental health as a reason to return to some kind of in-person instruction, but Rodriguez said a student survey showed, to his surprise, that student emotional health "is better than expected.
Students seem to be adapting to the online environment and progress in the semester is only about two weeks where it would be if classes were in session, which also is better than Rodriguez said he anticipated.
That said, the progress is not translating to academic success. 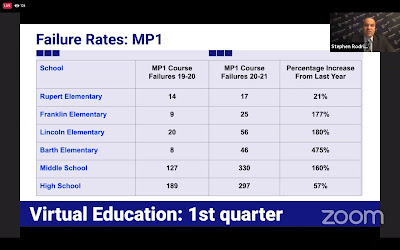 Many more students are failing classes than in the previous year. Rodriguez said much of that is likely due to students not attending their online classes.
At Barth Elementary School, failures went from 8 percent last year in this semester to 46 percent this year, a whopping 476 percent increase.
At the high school, 297 students are failing at least one class "and that is cause for alarm," Rodriguez said.
"Student progress is in jeopardy, and the parent struggle is real," he said in making a recommendation that was not unanimous on the COVID Task Force that examined the options.
"At times, it was like a scene from the film 'Twelve Angry Men," Rodriguez said. 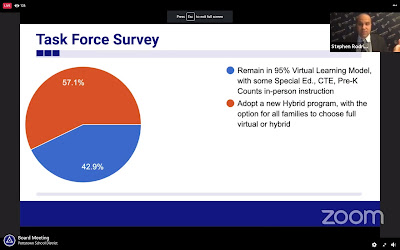 Some board members struggled with the decision as well.
Raymond Rose said "two weeks ago I was ready to go with hybrid," but now that the pilot projects have found problems, "I worry there is a risk that more could go wrong than could go right."
As a parent of three young children, "who are home with me, 24/7, believe I get and although I love them dearly, I want them out," he joked.
He said his vote to move forward was "a reluctant 'aye,'" a phrase Bonita Barnhill took up as well.
"People have been cooped up for almost a year now and you know people are going to get together for the holidays," Barnhill said. "We've gone this long trying to do the right thing to keep kids safe, another month or two will not make a difference," she said of the option of waiting until March to try to bring students and staff back into the buildings. 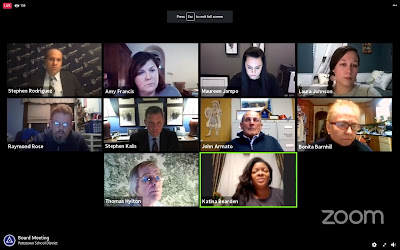 Board Vice President Katina Bearden, who was a member of the district's task force, said she too was ready to move ahead with hybrid classes until she saw data showing that in fact, students are not only dying from COVID-19, but also suffering long-term health impacts.
"That said, our students are not flourishing," Bearden said. That's why she supported the vote to "plan for hybrid, but be ready to go virtual if things get bad. If we hit the end of December and the rates have not come down, I would favor staying virtual until the end of the third marking period."
"Its better to prepare and get our ducks in a row and be ready when the time is right," said board member Laura Johnson. "If numbers over the winter get crazy, we can delay," going hybrid.
She reminded public, particularly those clamoring for a return to class, that the district's ability to go to hybrid depends, in part "on how we all behave over the holidays."
"Thank you for your trust in our team," Ridriguez told the board after the vote. "Thank you for your confidence. We will do our very best for our community."
Click here to see the Tweets from the meeting.
Posted by Evan Brandt at 12:00 AM