North Coventry Township continues to push ahead with its plans for open space and trails.

Monday night was no exception with no less than four items on the agenda having to do with those subjects.

The supervisors approved a design contract with the McMann Assoc. engineering firm to undertake the first two phases of a trail plan to connect Kenilworth Park with the extension of the Schuylkill River Trail soon to be extended from Parker Ford to Pottstown.

The connection will cross Route 724 and will require studies of wetlands, property ownership and easements. The approved contract for the first two phases of the project is for $37,500.

Overall, the project is estimated to cost between $150,000 to $200,000, said Township Manager Erica Batdorf. However, a Pottstown Health and Wellness Foundation grant will cover part of the cost.

The board also voted to apply for an annual PECO Green Region grant to cut another $10,000 off the township's bottom line.

Another trail connection will benefit from another unanimous vote taken Monday by the supervisors. 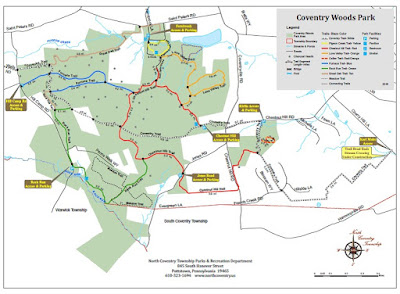 They voted to approve a "friendly condemnation" on two vacant lots off Chestnut Hill Road totaling about six acres.

Open Space Committee Chairman Chris Washburn said the parcels will allow for a trail extension to Coventry Woods Park which will keep hikers off Chestnut Hill Road along a particularly steep and unfriendly passage.

The cost for the property is roughly $150,000 and part of that cost has already been covered by a grant from Chester County.

Washburn said the township is waiting to see if a grant from the Pennsylvania Department of Conservation and Natural Resources will be awarded.

It has the potential, he said, to cover the remaining cost and allow the township to acquire the  parcels at no cost. 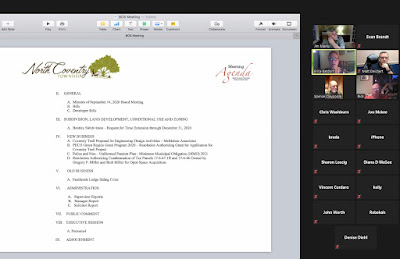 The township is also in the process of restoring the lodge at the former Fernbrook camp, now called Coventry Woods, and Monday night hosted a discussion of what color to paint the new siding that will be installed.

It will be made of composite material that looks like wood and so will "last a long time, probably longer than us," quipped Supervisors Chairman Jim Marks. Considering that, he said he does not want the township to make the wrong choice.

Several colors were discussed, with the favorites being red, as it is now, and "bark." The red will cost about $5,000 more, but there is enough money in the open space fund to cover the cost.

No decision was made because the supervisors decided they wanted to see swatches and not decide simply by a small image on their computer screen. "We don't want to get it wrong," Marks said.

Click here to see the Tweets from last night's meeting.