No Rotary Duck Race in Manatawny Creek This Year 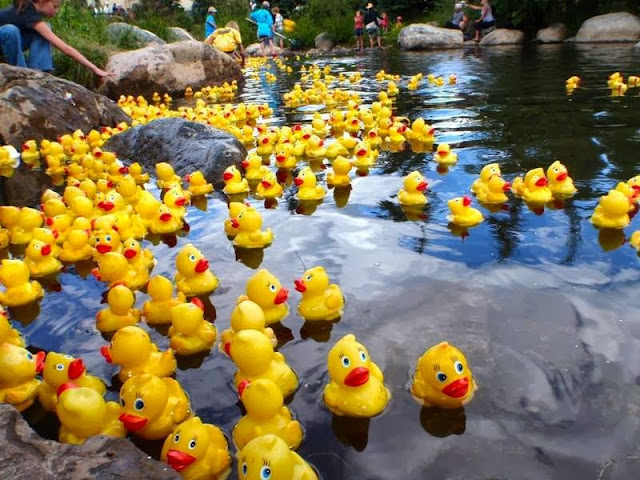 Blogger's Note: The following was submitted by the Pottstown Rotary Club.

The 29th Annual Rotary Duck Race which was originally planned for this summer will not be held in Memorial Park.
Brooke Martin, Rotary Club president, said the club wants to comply with safety issues caused by Covid19 and decided against a large gathering.
Instead, the tickets purchased by about 2000 individuals will be placed in a kiddie pool and drawn randomly at the club's regular meeting on Wednesday, Sept. 16.
For decades, the duck race has been part of the annual Fourth of July festivities. But those have been canceled this year due to public safety protocols for preventing the spread of the coronavirus.
These tickets were sold by Rotary Club members and 25 non-profit agencies.
The proceeds will support the agencies projects in the community.
Prizes will be awarded to holders of the winning certificates. First Prize is an award of $1,000 cash. Second prize is an award of $500 cash, and third prize an award of $250 cash. There will be almost 100 additional prizes with a total value of about $10,000.

For a complete listing of participating charities/non-profits who will benefit from this event and who are selling Rotary Duck Race tickets, visit www.PottstownRotary.org.
Last year, the Rotary Club gave more than $10,000 to the 25 participating community groups and agencies on a pro-rata basis. Since the inception of the Rotary Duck Race, The Rotary Club of Pottstown has contributed more than $365,000 to non-profit organizations in the Pottstown area because of this wonderful event.
Posted by Evan Brandt at 12:00 AM