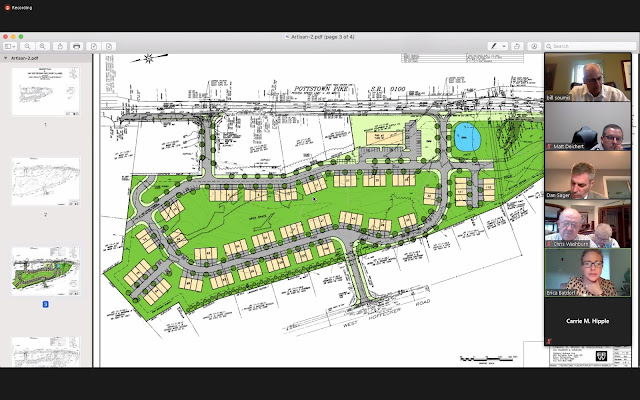 The same developer who has proposed age-restricted housing in East Vincent and Upper Pottsgrove townships has made a proposal for a townhouse project in North Coventry.

Township Manager Erica Batdorf said the name of the developer is Artisan Development and said although the contact she has there is with someone named Ron Christy, she has seen the name Jon Benson in communications.

Benson is the person who has appeared before both Upper Pottsgrove and East Vincent boards in connection with age-restricted development proposals.

Artisan's 143-unit 55-and-older community in Upper Pottsgrove received preliminary approval in November. A recent legal notice I saw suggests the company is now seeking a zoning variance, but I haven't looked into that yet.

Artisan is also the company asking East Vincent Supervisors to re-write their zoning to allow for 212 age-restricted units on 66 acres off Stony Run Road.

There are not too many details available yet as the township only just acknowledged receipt of the plan submission at Monday night's supervisors meeting.

What is known about the North Coventry proposal is, according to the plans shown during Monday's meeting, it calls for 115 townhomes, with access in two locations along the west side of Route 100 and one access from the rear onto Hoffecker Road.

Supervisors Chairman Jim Marks said it is the same developer who made a proposal for the cornfield on the east side of Route 100 at Hoffecker Road, a plan which the township did not favor.

Marks said the township intends to schedule a meeting between the developer and the staff, and invite planning commission members, to begin to hash out the details.

"There are all kinds of issues with this proposal," he said.