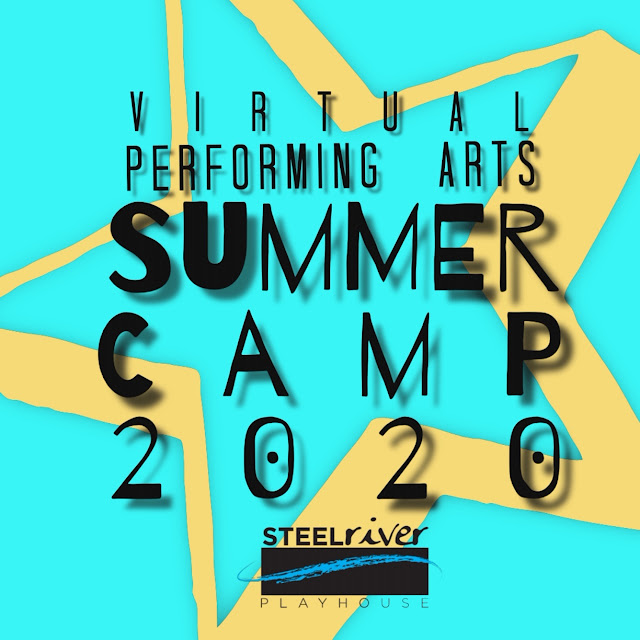 Blogger's Note: The following was submitted by the Steel River Playhouse.
Summer’s here, and Steel River Playhouse has announced this year’s “Summer Stars” summer camp program. The camp is divided into two-week sessions and will meet virtually allowing students to work together as a group in a safe environment.

In session No. 1, “Setting the Scene,” students will create a story and character, exploring acting fundamentals, the difference between stage and film acting, and work on scenes with a partner (virtually) as well as receive individual instruction from an acting coach.
The experience culminates with each student taping a final monologue, their scenes, and enjoying a virtual viewing party. Camp Session No. 1 runs from July 6 through July 17.

In session No. 2, “Shining Through Song,” students will take a piece of music and create a character and a story to create an entire world with one song. They will meet virtually in a group setting to explore story arcs, character development, and creating the world. Then each student will meet individually with an acting coach and music director to explore techniques to bring their song to life.
The session will culminate in a taped performance and virtual viewing party. Session No. 2 runs from July 20 through July 31.

The camps will be led by Phillip Ballantine and Alicia Brisbois, with Music Director Kat Lansang for Session No. 2.
Both sessions are open to students age 8 and up. Tuition for each session is $100.
The group classes will meet daily for one hour at 10 a.m., and the individual sessions will be scheduled for each student.
For more information contact leena@steelriver.org, or register by going to https://steelriverplayhouse.regfox.com/virtual-summer-camp-2020.
You can find a video with more information at https://youtu.be/4oDeIo8FJjY.

Information on the instructors:

Phillip Ballantine received a BA in Theater and Psychology from Gettysburg College, a Master’s Degree at Rosemont College in Counseling Psychology, focusing on art based therapy. He has been teaching for over ten years. He specializes in children's theater and is currently employed at the Wyndcroft School as their Drama Instructor. He has taught children’s theater at Gettysburg College, the Greylock Theater Project in Williamstown, MA, the Pottstown and Perkiomen School Districts, Strength and Motion Studios in Boyertown, and at Steel River Playhouse. He especially enjoys helping young actors utilize their imagination and creativity to express themselves through the arts.

Alicia Brisbois has been directing, acting and teaching in the Philadelphia area over 30 years. She is a proud product of Temple University Theater and has been lucky enough to have studied at the Tricycle theater and King’s Cross Theater in London. She has acted professionally for the stage and television, directed both musicals and plays and has taught all ages and levels! She recently Directed “Annie” at First Street Players and is thrilled to be joining Steel River’s camp team.

Kat Lansang will be Music Director for camp session No. 2. Kat is a K-8 music teacher at Olney Elementary in Philadelphia, where she teaches choir and general music. She studied Music Education at Temple University, with focus on piano and singing, and graduated in 2018. She has prepared students for high profile performances at Temple University, The Kimmel Center, and City Hall in Philadelphia. She has been accompanying and playing piano in pits for many theaters around the Berks area for years. She enjoys working with young singers and actors to help them expand their vocal abilities and musicality. Kat is excited to dive deeper into virtual teaching to give children access to music learning!
Posted by Evan Brandt at 11:57 AM