Commissioners Martin Schreiber cast the sole vote against the sale.

As The Mercury reported April 8, the presentation provided at four online informational sessions earlier in the month forecast that sewer rates would drop by about 9.6 percent under Pennsylvania American Water ownership. 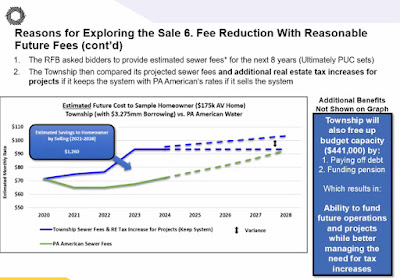 However, the decrease — from the current $71.87 per month to $65 per month — would be short-lived, according to Bernie Grundusky, senior director for business development for the water company.

A chart he shared as part of the online meetings showed rates would return to the current rate in three or four years after the sale, and then increase annually by an average of 4.5 to 5.2 percent.

By comparison, the township's sewer rates, which have increased in a more haphazard fashion, average out to between 4.6 to 6 percent a year, according to the presentation. 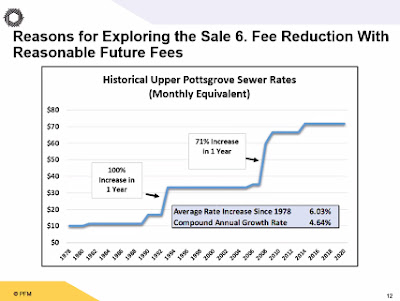 Now that the sale has been approved, the average homeowner will save  $1,260 between the time rates were dropped to when they return to their current level, according to the presentation.

The deal must still be approved by the Pennsylvania Public Utility Commission, a process which could take longer than a year to be finalized.

As a result of the vote, PFM Financial Advisors LLC will be paid more than $250,000.

As noted by Commissioners Chairman Trace Slinkerd, who, prior to the vote, praised the consultants for taking a risk, noting that if the commissioners voted against the sale, PFM would have been paid only its $7,500 fee for preliminary work.

Scott Shearer, managing director of PFM, insisted during Monday's meeting that the firm "did not make a recommendation. We're not trying to sell this system."

During the four public information sessions the township staged online, not one negative aspect of the sale identified. Township Manager Michelle Reddick said the presentations were put together by PFM and the staff.

(You can see that presentation by clicking here.)

During those meetings, Slinkerd restricted all interaction to questions from residents, which were mostly answered by the consultants or township staff. He said public comments would be accepted at the April 20 meeting.

When that happened last night, the online meeting was attended by more than 50 people.

Eight residents spoke. All but one asked the commissioners to vote against the sale or, even more frequently, delay the vote until next month or later.

Pennsylvania American Water's bid does not expire until June 30. 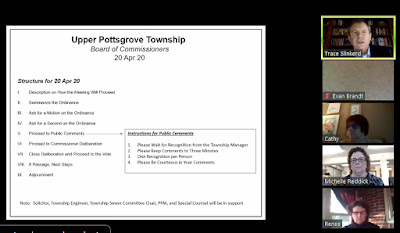 Don Read, a former member of the Pottstown Borough Authority and a current member of the township's sewer committee, spoke in favor of the sale and said, as he did at the April 16 meeting, that the best reason to sell the system is the risk inherent in running it.

He said the potential capital costs of problems with sewer lines and pump stations, as well as capital costs imposed by the Pottstown Borough Authority, which runs the plant that receives and treats Upper Pottsgrove's sewage, is too big a financial risk for a four-person staff.

"The price is on the high side of what we projected," he said of the winning bid. The other bidder was Aqua America. "What's another month going to do? It's frustrating to watch people come in at the last hour and ask for a delay."

He was referring, presumably, to other speakers who said they were unaware of the potential sale of the system until they received a township letter in the mail, a letter which arrived after the first two public information sessions had already occurred.

"I am imploring you all to take an opportunity to table the vote until the May 20th meeting," said Turnberry Farms resident Stephanie Rowe.

"This is beneficial in several ways, the first being it allows all residents to be able to digest and question this decision that seems to be on a fast track for a reason that has not been satisfied by any of the presentations that you allowed to happen with little or no response from the board -- almost every question was deferred to either PFM or PA American Water," Rowe said.

Darryle Tillman, who appeared in scrubs while caring "for 104 patients, one third to one half of
which have COVID-19," also urged a delay.

"This plan has its good points and its bad points, but it is ridiculous to do this in a Zoom meeting in the middle of a pandemic," he said in reference to the on-line platform used for the meeting.

Al Leach, who is also the vice president of the Pottsgrove School Board, also urged a pause.

"I'm sure you've all done your due diligence, but a lot of residents are just finding out about this and would like to see if they can get more involved," Leach said.

"There are a lot of questions that need to get answered, like how the board intends to spend the proceeds, and the open space question," he said.

Although the presentation has identified the proceeds as paying down the sewer system debt; making the pension system whole and paying off general fund and road fund debt, two other proposed uses have raised questions.

One is paying off debt undertaken by the open space fund, which is paid off with a voter-approved earned income tax; and infrastructure improvements to the police station and township offices in the firehouse.

No specific plan for those improvements has been presented as part of the sewer system sale proposal, said resident Doug Kern.

"We have no access to the paperwork, no ability to examine this ourselves," said Kern, who said he did not find out about the proposal until two of the public information sessions had already passed.

"All I have is a bunch of slides, which changed after almost every meeting, and a lot of 'take-my-word-for-it-answers. It sounds like you have a 90-day window to make a decision," said Kern, urging a delay or a no vote.

Dustin Schreiber said his research indicates American Water, the parent company of the high bidder, "is owned by a German conglomerate called RFWAG. I'd prefer we support an American company if we sell, and  I'm not convinced we should sell."

Hanover Drive resident Keith Plumadore said he sees the sale as a short-term fix for the township's finances. "It's an temporary reprieve from amateur fiscal management. The township did a good job with the (request for proposals) but I see no evidence the township will execute and bring better fiscal governance with the proceeds."

"When I moved here in 2000, the commissioners and the people all worked together," said Leach. "I implore you to at least consider the idea of tabling this motion, It would be so easy to delay this vote so we can get all our ducks in a row and demonstrate transparency we always used to have in this community."

Slinkerd closed public comment and then called on Schreiber to outline the objections he has been posting on his Facebook page and the Turnberry Farms Facebook page.

However, as Schreiber spoke, Slinkerd repeatedly interrupted him, talked over him and told him his points were not relevant to the subject at hand.

"The sewer customers paid for the sewer, if they were stock holders, they should be getting a bonus check, they're getting the short-end of the stick," said Schreiber.

"What about people who pay school taxes but don't have any children in the system," Slinkerd interjected. "Should they not be taxed?"

"Everyone has a chance to send to send students to school," Schreiber replied. "What about open space, Martin?" Slinkerd interrupted again. "That's paid with earned income tax, but seniors don't pay that. Should we put signs up telling them they can't use the open space?" Slinkerd asked.

"We taxed ourselves for that," Schreiber started to reply and Slinkerd pressed on. "We don't separate our residents into septic or sewer residents. Are you saying that's the way we should go?"

As Schreiber tried to raise further points, Slinkerd continued to interrupt him. "That's what you've been doing, going down this rabbit hole trying to dislodge what we're talking about," Slinkerd said.

"You keep trying to throw things at the wall at the 11th hour to see what sticks to make it seem like you did research," he continued. "You've had a year to think about this stuff."

"Are you going to let me finish?" Schreiber finally asked. "I never stopped you," Slinkerd replied, finally allowing Schreiber to speak uninterrupted.

The other commissioners, Dave Waldt, Cathy Paretti and Renee Spaide were permitted to speak uninterrupted, except when Schrieber thought Paretti was finished with her point.

He apologized for interrupting her and urged her to go on.

The other commissioners joined in disputing Schreiber's points.

Spaide, who has served on the board for many years with Schreiber, read from a prepared statement that noted, in part, "all the commissioners have been involved."

She said she agrees with Read that running the sewer system is a risk. "We have a road crew, not a sewer crew and Pennsylvania American Water does this for a living," said Spaide.

Waldt said he and Paretti "ran on concern about the township's finances. People were very unhappy." He disputed Schreiber's characterization that he was left out of discussions. "We've spent hours on the budget and I never see you. You never participate," said Waldt.

"Dave and I started to get to get acquainted with this while we were running," said Paretti. "We don't have any business running a sewer business. If we keep it, our taxes would rise and the rates would be higher than if we didn't own it."

She added, "I don't wait to be invited into things, I ask for the information I need."

When Schreiber tried to point out he had asked Reddick for information and it took two days to get an answer, the other commissioners leapt to her defense. "Michelle has a lot on her plate," said Paretti.

Paretti pointed out that while people last night were complaining about having the meeting over Zoom, it had more participants than most in-person township meetings.

"It's great to see so many people participate. This is not as many as we get at regular meetings. I've had people tell me they like this better," said Paretti. "You're never going to make everyone happy."

But even in a pandemic, "the one thing that can't stop is your government," Paretti said.


After the vote, Slinkerd said next steps would be discussed at a future meeting.
Posted by Evan Brandt at 12:00 AM