The news not yet reported to come out of last night's council meeting came, as is so often the case, from something not on the night's agenda.

After unanimously approving three re-developments and one major plan for the development of Keystone Boulevard which I'm quite sure you all read in Sunday's Mercury ..... right? .... the surprise was sprung. 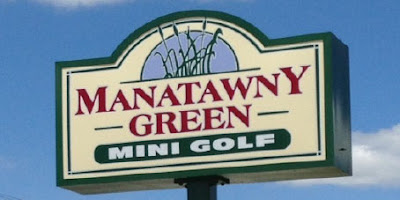 Borough Manager Justin Keller brought up a new item and said he had just Friday been made aware of a vote by the board of directors of the Carousel at Pottstown.

They have agreed to the borough's terms for having the carousel take over the operation of the adjacent Manatawny Green Mini Golf.

Located on the High Street side of the parcel adjacent to the Carousel at Pottstown, Manatawny Green was first opened in 2014 and although it has lost money every year, "we were satisfied with the growth," said Parks and Recreation Director Michael Lenhart.

Satisfied, that is, until last year.

With one of the wettest summers on record, Manatawny Green had an operating loss of $26,000 in 2018, said Keller.

Much of that is due to the $42,000 in seasonal staffing costs. All of those hired for the season are eligible for unemployment benefits when the season ends, "and it can get quite expensive," he said.

Lenhart said "when things are really humming," it takes three employees to run the mini-golf facility, one at the concession stand, one at the ticket window and one to police the course, pick-up trash and be available for breaks for the other two.

Under the three-year lease agreement council unanimously authorized Borough Solicitor Charles D. Garner Jr. to draft, the Carousel would pay the borough $3,500 each year to lease the space.

The borough would still remain responsible for cutting the grass, plowing the snow and paying utilities.

Both the Carousel and Manatawny Green are on a set of parcels along Manatawny Creek and between King and High streets once occupied by an industrial use, the former Pottstown Metal Weld, which had closed by the time it was purchased.

The property was obtained through the support of Montgomery County's Open Space Program, the Pottstown Area Health and Wellness Foundation, and the PECO Green Region Program.

Two years after Manatawny Green opened in 2014, it was the Carousel at Pottstown's turn.

It opened in 2016 just in time for Christmas after 16 years of effort. Since then it has covered its costs and operated in the black.

Lenhart said although the carousel group and borough have always cooperated, having one entity oversee the whole site will make coordination easier and let the carousel consolidate ticket operations for both facilities.

Rides on the carousel are only $2, and it makes most of its money from hosting events.

The most recent was a "Noon Years Eve" for kids on Dec. 29, which raised money for a planned Pottstown Children's Discovery Center.

Last year, members of the carousel board told council they hope to add a catering kitchen to the facility in 2019, making it more attractive for events like weddings and parties.

Control of the concession stand at the mini-golf may eliminate the need to build a separate snack bar at the carousel facility.

Located across King Street from Memorial Park and just over a block from Riverfront Park and the Schuylkill River Trail, the site is also near to Pottsgrove Manor, the ancestral site of Pottstown
founder John Potts, as well the Secret Valley Line, the tourist line of the Colebrookdale Railroad between Memorial Park and Boyertown.

Plans call for the construction of a Victorian period rail station in Memorial Park.

The concept was created with an aim toward attracting financing by demonstrating the cooperation between the government and non-profit entities and applying jointly.

Both Manatawny Green and the Schuylkill Greenway sites also provide free bicycles through the Bike Pottstown program. One is also planned for the colebrookdal Railroad station.

Most of the other matters at last night's meeting were routine.

Here are the Tweets.

Carousel May Take Over Mini-Golf
Posted by Evan Brandt at 12:00 AM