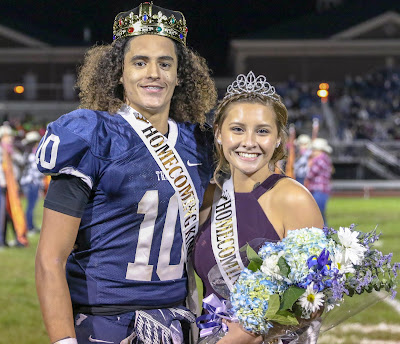 The king and queen were Nehemiah Figueroa and London Aquino, pictured at right.

Jalyss plans to attend college and study criminal justice. Her escort was Nehemiah Figueroa. He is a captain of the football team and a member of the track team.

Nehemiah volunteers to work with children in the Police Athletic League and plans to study electrical engineering and business after high school.

Nehemiah was King of the court and the field he had a 85-yard kickoff return for a score, an interception, and four receptions for the Trojans.

London Aquino, is the president of the Senior Class. She is an active member of the marching band and the secretary of the National Honor Society.

London is a member of the cross country and softball teams and a captain of the swim team. London plans to study business and interpersonal relations in college.

London’s escort was Adrian Sibilly. He is a member of the football and baseball teams. Adrian plans to attend a technical school for electrical engineering.

Johnay Cranford, has been a four year member of the varsity soccer team, marching band, and clarinet ensemble. She is also a student representative of the Pottstown School Board.

Johnay plans to attend Temple University to major in nursing and specialize in labor and delivery.

Her escort, Destyn Snyder, is a member of the football, wrestling, and track and field teams.

He is also a member of the National Honor Society and Deca. Destyn plans to attend a four- year college and major in business while continuing his football and wrestling career.

Ariana Garcia is the vice-president of Student Government,
secretary of the Interact Club, treasurer of the National Honor Society and a captain of the Color Guard.

Ariana plans to attend a four-year university to study business.

Her escort was Mitchell Aquino. He is the vice-president of the Senior Class and the National Honor Society.

He is an active member of the marching band and DECA, as well as the cross country and track teams. Mitchell plans to attend a four-year university to major in marketing.

Dazah Regusters, is a member of the field hockey, basketball and lacrosse teams.

Dazah plans to attend the University of the District of Columbia and major in nursing while continuing her lacrosse career.

She was escorted by Donny Marte Jr. He is a member of the marching band and one of the drum majors while also serving as the manager of the cross country team.

Donny has had major roles in the past three Pottstown High School musicals, most recently appearing as Sebastian in The Little Mermaid. Donny plans to attend Penn State University to major in forensic science with a minor in musical theater.

Julia Day is currently attending Temple University studying photography and cheering on her fellow Owls in the Cherry Crusade.

Wiggins is a freshman at Millersville University where he is studying Early Childhood Education and wrestling for the Mauraders.

You are now Pottstown Royalty.
Posted by Evan Brandt at 12:00 AM