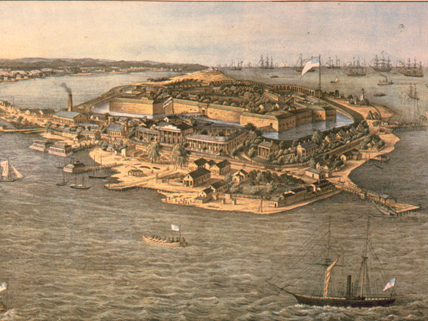 The Friends of Hopewell Furnace invite the public to meet Terry Brown, superintendent of Fort Monroe National Monument who will provide an overview of this 21st century park on Sunday, Oct. 14.

The free program will begin at 2 p.m. in the Hopewell Furnace Conference Center.

Designated a unit of the National Park System in 2011, Fort Monroe National Monument is a decommissioned military installation in Hampton, VA—at Old Point Comfort, the southern tip of the Virginia Peninsula.

Along with Fort Wool, Fort Monroe guarded the navigation channel between the Chesapeake Bay and Hampton Roads—the natural roadstead at the confluence of the Elizabeth, the Nansemond and the James rivers.

Surrounded by a moat, the seven-sided star fort is the largest stone fort ever built in the continental United States. While Hopewell Furnace was known for its production of iron for the Civil War, Fort Monroe remained a bastion of defense for the Union.
A 26-year veteran of the National Park Service, Brown has served at several national parks in Pennsylvania, the District of Columbia and Massachusetts.
Raised in a military family, he spent a good portion of his childhood overseas. He graduated from AFCENT Brunssum International High School in the Netherlands in 1987 and returned to the United States to further his education at Grambling State University in Louisiana. He graduated from the University in 1992 with a degree in Criminal Justice.

While at the park, visitors are encouraged to explore the landscape, go into the village, tour the buildings, and learn about iron making and why Hopewell Furnace is important to our nation’s history. Open 9 a.m. to 5 p.m. Wednesday thru Sunday, the park is located five miles south of Birdsboro, PA, off Route 345. For more information visit www.friendsofhopewellfurn.org.
Posted by Evan Brandt at 12:00 AM